A book I loved

I've read a lot of good art books in the last decade but have never was moved to write a "book report" and urge my friends to read one.  But the book I just finished is so strangely wonderful that I have to carry on about it for a bit.

It's "Bright Earth" by Philip Ball, written in 2001 and subtitled "Art and the Invention of Color."  Ball was a chemistry major as an undergrad and received a Ph.D. in physics, so when he tells you how pigments work you know it's technically accurate!  He has written a history of how artists discovered various pigments and binders over the centuries, and how the availability of these tools influenced the kind of art that was made.

Today we can use every known color in the rainbow, and lots more, in whatever form we want -- paints, pencils, pastels, dyes, photography.  It's hard to think of a time when you couldn't use blue or green, or only at vast expense, because the materials didn't exist or were prohibitively expensive.  For instance, did you think, as I did, that ultramarine blue was named because it was in some way really, really like the color of the ocean?  Not so.  "Ultramarine" means "across the sea," because the pigment, ground from a stone called lapis lazuli and precious beyond imagination, was imported from far away (mostly Afghanistan).

The discovery or invention of new pigments through the centuries not only influenced the colors in paintings but also the very nature of the art.  For instance, the development of pre-mixed oil paints in tubes, instead of artists' having to grind and mix their own paints, enabled them to take their easels into the fields and paint plein-air.  Ball quotes Renoir:  "without paints in tubes, there would have been no Cezanne, no Monet, no Sisley or Pissarro, nothing of what the journalists were later to call Impressionism." 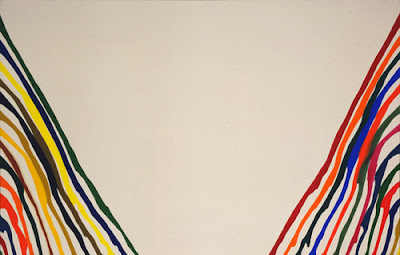 In our own century, the color stain paintings of Helen Frankenthaler and Morris Louis would have been impossible without the invention of acrylic emulsions in 1953.  This type of paint was runny and transparent, perfectly suited to being poured onto tilted canvases.  Jackson Pollock's drips and spatters were made with thin gloss enamels, developed after World War 1 as automotive and house paints, and cheap enough to be used on the vast canvases of the Abstract Expressionists. The flat colors of Pop Art, devoid of brushstrokes and the "old-fashioned" marks of the painter's hand, were enabled by fast-drying acrylics.

For those of us more familiar with dyes than paints, the discussions of dye chemistry will be of particular interest.  Ball maintains that the entire field of organic chemistry developed primarily from the search for better dyes.  But it wasn't until 1954, with the invention of fiber-reactive dyes, that truly colorfast cottons became available.

I could go on and on, recounting how new pigments, new binders and new techniques enabled new kinds of art.  I learned plenty about art history from this book, and even though the chemistry went in one ear and out the other, every sentence was fascinating on its way through my brain.

If your library doesn't have a copy of this book, you can get one for five dollars on Amazon and I can think of no better present to yourself if you're interested in art and art history.  Even if your only connection with paint has to do with your fingernails, you'll learn plenty and love the journey.
Posted by Kathleen Loomis at 5:59 AM