I'm nearing completion on my first flag quilt, and got it to the point where I could hang it on the wall. Which is easier said than done, since it's almost 100 inches long and the ceiling in my studio is almost 84 inches tall.  Fortunately I have a display space in my front hallway, with a rod right at the ceiling and a wall that extends down the stairway to the nether regions.  So I was able to put the quilt up and see what it looks like.

It looks very imposing, but it doesn't hang straight.  The right-most white stripe bows toward the left, which forces the middle red stripe to double up on itself. 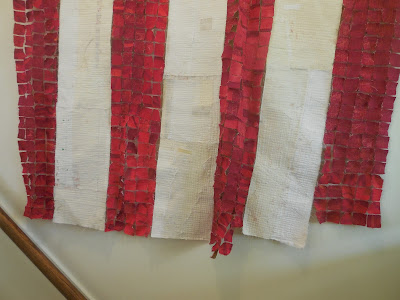 I am not opposed to this quilt hanging wonky; in fact, it fits with my conceptual theme of going wrong, but this just looks like accidental wonk, not deliberate wonk.  The latter I would embrace; the former I have to fix.  So when I get back from my road trip next week the quilt is coming off the wall and back to the sewing machine.

I'm going to cut a wedge out of that wonky white stripe and hike it up so it will hang closer to vertical.  Then I'll put it back on the wall and see how the right-hand red stripe feels about its relationship to the revised white stripe.  Maybe I'll have to either take up some of the extra height of the right-hand red stripe, or re-stitch it to the white.  I'll keep you posted.

Meanwhile, I already LOVE this piece and think I'm going to love it even more when it gets tweaked!