Today I get to share with you two quilts made by the younger generation -- one of the best things that can happen to our favorite skill and pastime is to pass it along to the kids.  Anna Shanahan writes from Australia that she and her two girls read my Rail Fence book over the holidays and chose some fabrics to turn into quilts.

Sophia, who is 11, wanted a star effect, and her mom suggested a pinwheel layout with rail fence blocks.  She liked blue and purple, and after a discussion on color theory they decided to use yellow and orange for the edge rails for a high-contrast palette.  Sophia developed an interesting technique for sewing the blocks: first she sewed a very long strip of blues and purples.  "She sewed the yellow rails onto the ends of the long strip, then cut or unpicked the blocks off the ends, and repeated the process. She seemed to enjoy it, and stuck to it pretty well. Once she had her blocks, she fiddled around with the layout, then sewed it up." 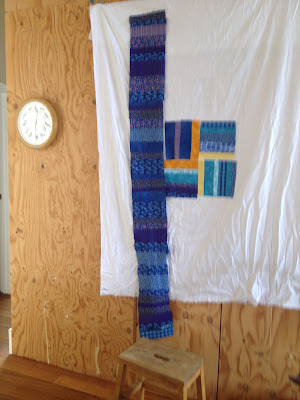 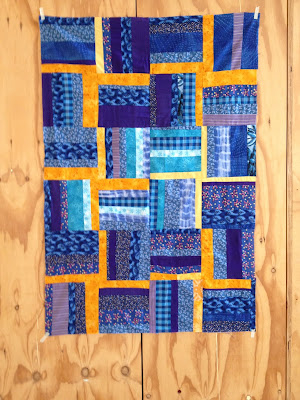 Imogen, who is 8, liked two quilts in the book that were made from very fat rails alternating with very thin.  Anna writes: "We discussed the beautiful fabrics used, and the thin rails. Then we had a look through the fabric here to see if there was a biggish piece of something she found exciting. She seized on the planet fabric, then went about choosing fabrics to insert. She'd been involved in the earlier colour theory conversation, and went about making her choices with great confidence and assurance. I was quite surprised, and frankly delighted to see the decisions and choices she made. It's been really interesting to let other people make use of the fabrics here. 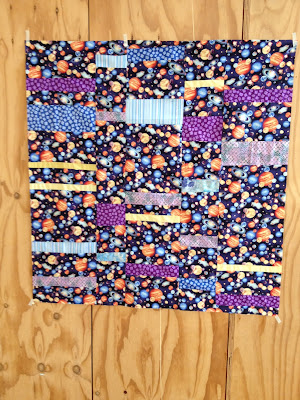 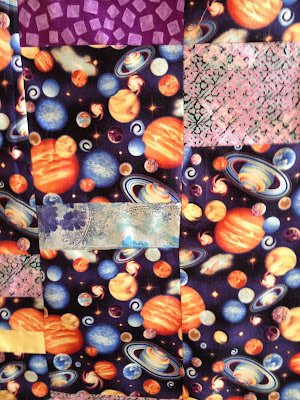 "I wasn't confident to let her use the cutter, so she marked the fabric where she wanted it cut, both for the main fabric and the contrast rails. Then she sewed the strips into blocks, put them up onto the wall, and decided what order to put them in. She was struggling with the long, pieced seams, so I put those ones together. However, she loves pressing, so did all the ironing work."

"It's been a fantastic and achievable process for everyone. The girls are really proud, and want to show their friends how to do it. I think we'll be having another workshop next holidays. I like that the quilts are so different to each other, and to what I make. It took very little input from me, despite their lack of previous experience.  And the girls are already planning their next pieces."

What a great story!  There's nothing quite so exciting as to help a child learn a new skill, and watch her use it with confidence and fun.  Good work, Sophia and Imogen!