No, you can't be art after all


Several years ago I got the idea to save the empty prescription bottles that had finished their careers of keeping us alive.  I had a vague idea that I would assemble them into a huge sculpture, with all their different sizes and shapes (because god knows we have gone through a huge variety of medications since starting to get old).  I even tried holding some together with wire, after putting holes in the bottles with an awl.  Which turned out to be a lot harder than I thought it was going to be, because prescription bottles are apparently designed to withstand earthquakes, tsunamis and chain saws.  The art project never has materialized, but the prescription bottles keep piling up.

Does this remind you of any art projects that may be resisting arrest in your own studio?  Have you ever put things away for a specific purpose -- or maybe just a vague idea -- that never happened?  I think we all have UFOs sitting there out of gas.  A lot of people feel compelled to finish them, even if they don't want to.  My friend Robin is in a group that has pledged to finish a UFO every month, on pain of financial penalty if they don't meet their deadlines!

I think this is kind of a dumb idea, with all due respect to Robin.  Yes, I have frequently put projects aside because they aren't coming along properly, or I get tired of them, and sometimes when I run into them months or years later they call out to me to be finished.  Sometimes the idea that eluded me so long ago springs to mind.  Sometimes the thought of mindless but useful sewing appeals, if my emotional state needs mindless but useful sewing.  But I firmly do NOT believe that there is a moral obligation to finish everything you start.

Especially as you get older.  Understanding that you have a limited number of days of art left in your life, do you want to spend them finishing up some ugly damn quilt or stupid knitting that arguably you should have known better than to start in the first place?  Or do you want to spend them making something that will stretch your abilities, challenge your creativity, and give you pleasure in the task?  I go for the second door.

I kept saving those prescription bottles, though, even while admitting intellectually that the huge sculpture project probably wasn't a good idea, and that I didn't even much want to do it any more even if I could figure out a plan.  The process of saving the bottles had taken on a life of its own.

Then yesterday my daughter-in-law sent me a text:  "Do you have any empty prescription bottles we can have?  A friend of ours is collecting them for part of a service project."  Well, did she come to the right place!

Seems the friend, a pharmacist, is assembling care packages for elderly people in food/pharmacy deserts.  They're putting OTC medications like aspirin, allergy and heartburn remedies, purchased in bulk, into the bottles to distribute.

Here's what I  have collected so far: 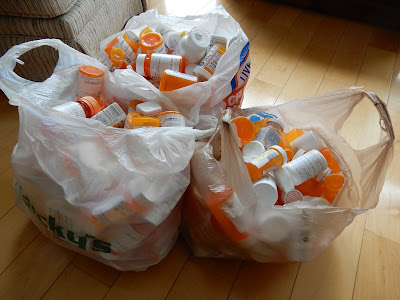 I suspect there are that many again more stashed in other places in the studio.  I will resume the search. 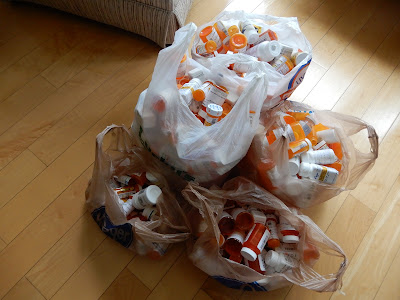