Plague diary May 26 -- leave me alone


Memorial Day weekend is traditionally the official kickoff to summer.  People have picnics and ballgames, and afterwards you can correctly wear white shoes, but only till Labor Day.  Across the country the pandemic has not put much of a crimp into these traditional activities, except maybe the shoes.  I think it's way too soon, but all weekend we've seen scary photos of mostly non-masked people, obviously starved for human society, crammed into restaurants and bars and beaches and all sorts of public places.  I suppose in two weeks we'll see the spike in coronavirus cases, because death rarely takes holidays the way we stupid people do.

But just as a lot of people are eager to take their pandemic response to a new level, I find myself moving in the other direction.  I'm kind of tired of reaching out to other people for social contact.  I've spent many an hour on the phone with friends and family and neighbors talking about what we're doing in seclusion; little of those conversations has been stimulating, affirmative, optimistic, amusing or even very interesting.

I hear the same words coming out of my mouth when talking to my sister-in-law that came out of my mouth days before talking to my art pal.  I search for something different to talk about, but don't have the energy to launch into a discussion of the book I just read or the art project I'm working on.  I just want to hang up the phone and go into the studio by myself.

I had two more zoom meetings last week, and though the technology is getting a little bit easier, I still don't like it, and certainly don't crave it.  I have found that alcohol helps.

I wrote last month about two different art exchanges that I signed up for in the early days of lockdown, when it seemed like a good idea to connect with others and swap work.  One was among four of us who regularly get together in person but haven't had a meeting since March.  The other was among strangers, a few of whom are several levels above me in the art world food chain, and I sent my work to them with some trepidation.

Just this week I sent off the last two projects in these exchanges, and while I've had a lot of fun making and receiving things, I am glad this is over.  It allowed me to work on some little sculptures 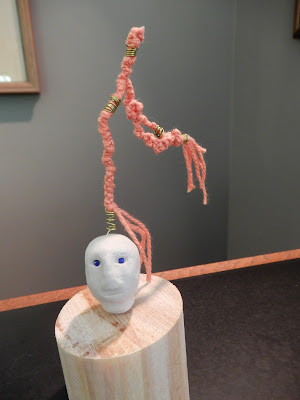 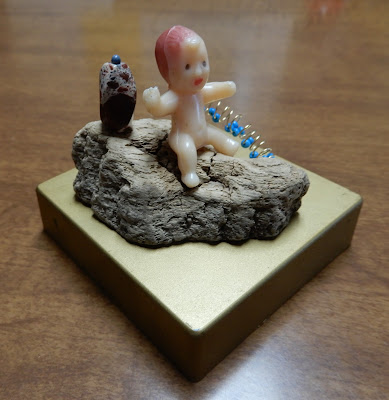 as studies in technique for ideas that have been brewing for a while.  In particular, I would like to make a bunch of the clay heads and display them in some kind of larger array.

Of all the pieces I sent and received in the stranger artist exchange, here's my favorite, a three-step exquisite corpse exercise.  I had step one, and sent this off, leaving plenty of room for additions: 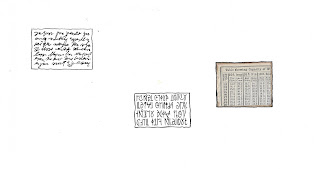 The next artist in the chain added the drawing of the woman, and finally the third added pale beige stitching to put more "pictures" on the wall.  (Hard to see in this screen grab, but you can find a better image on instagram.) 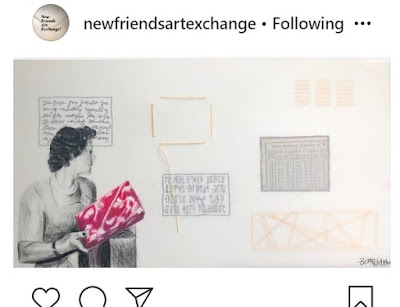 But now playtime is over, and I am relieved.  I responded to the invitations because early in the pandemic, connection seemed important; now less so, at least for me.

I hope this new phase of withdrawal isn't going to send me into a funk.  I need to get down in the studio and make art.

Posted by Kathleen Loomis at 10:25 PM