A message from Alison 1

Recently I struck up an email conversation with Alison Schwabe, an internet pal who lives in Uruguay, whose blog I read.  She announced that she got into Quilt National 21 and lamented the fact that this time around she probably won't be able to go to the opening festivities next spring, as she had for all the previous QNs she was in.  I sent her congratulations and mentioned that I couldn't remember which of those celebrations she and I both attended -- the only time we have met in person, to the best of my recollection.

Alison wrote back and said "I think we might have both been at QN09 where your wonderful piece Memorial Day was hung so impressively there in prime position near the entry! ...I imagine it is in a collection now?"

Funny she should mention it, because just this month Memorial Day went off to its permanent home, at the International Quilt Museum at the University of Nebraska in Lincoln.  IQM is attempting to acquire as many as possible of the big prizewinners from all previous Quilt National shows, thanks to a grant from the Robert and Ardis James Foundation, and my quilt qualified because it won the Quilts Japan Prize at QN09. 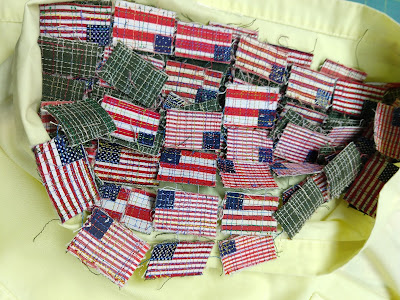 It was a bittersweet task to pack up Memorial Day and send it away forever.  Yes, it will be seen by many, many more people, and be taken care of in much more archival fashion than it has been for the last nine years, packed in a box under my guest room bed.  But mothers always worry a bit when their babies grow up and leave home.

Here's a peek of it, still beautifully wrapped in a sheet from when I last had it out in public, and as it went away to Nebraska.  (Because the quilt consists of 4,083 tiny bits, hanging by threads, it's extremely difficult to fold it properly.  When I sent it off to QN I had three friends and a very large table to help me.  When I took it off the wall almost four years ago, my son and I struggled for a long time on the floor to get it refolded.)

Alison said she looked up Memorial Day in her QN catalog, "and remember being amazed that each of those tiny patches is a suggestion of a US flag, of red/white striped fabric with a tiny little piece of navy fabric in the top LH corner of each.  You had several different red/white striped fabrics, and I think each piece was double sided?  I didn't remember that the final row was incomplete... and I can't even wrap my mind about how you made that!"

She's right, each of the thousands of flags is a little quilt, made with red/white stripes on the front, plain green denim on the back, and a lot of stitching.  I had found a bunch of different R/W striped fabrics, and a bunch of different navy fabrics with little white stars or dots or random speck patterns to simulate the union of the flag.  And I had also bought a yard of an old Nancy Crow fabric with actual tiny flags to accurate scale (and made my homemade flags in the same size).

The final column of the quilt was incomplete because the quilt marks the number of US troops who died in Iraq.  The count starts at our invasion in March 2003 and ends on Memorial Day 2008 -- 4,083.  All the columns had 70 flags except the last one, with only 23.

How I made that -- yes, it's hard to imagine the process.  It took me several "postage stamp" quilts to work out a process, and if you're interested, here's how I do it.  But after you've figured that out, it's just a case of sewing, sewing, sewing, sewing.  As I was trying to finish this quilt in the summer of 2008, I realized one day that my right knee was extremely unhappy.  Who knew that the sewing machine foot pedal was enough work to cause repetitive stress injury?  I finished the quilt with my left foot on the pedal (surprisingly difficult) and the knee rested up to normal, so a happy ending.

Thanks, Alison, for prompting my walk down memory lane -- and congratulations on your QN triumph!