The pandemic had its bright moments, and for me one of the highlights of the year was more reading time.  Thankfully our library, though all branches were shut for several months, kept its digital services going and seemed to be buying new e-books at a faster rate than it had Before.  As an avid reader of the New York Times Book Review, I would frequently read about a new book that looked interesting, pick up my phone and put in a request for the e-book.  Nowadays if a library hasn't purchased a book yet, it will still show you the blurb for the book and allow you to "recommend" it.  If it's purchased, you go to the head of the line to check it out.

I know exactly what books I read last year thanks to my new habit of writing an excerpt from each book as my daily calligraphy, on the day I finish it.  And I can go back and read those passages to revisit any book that I have forgotten the details of.

I read a lot of nonfiction last year, mostly about social justice, American history and politics.  I particularly recommend Evil Geniuses by Kurt Andersen, which outlines how our political system has become so polarized and hateful in the last decades.  (Hint: it wasn't accidental.) 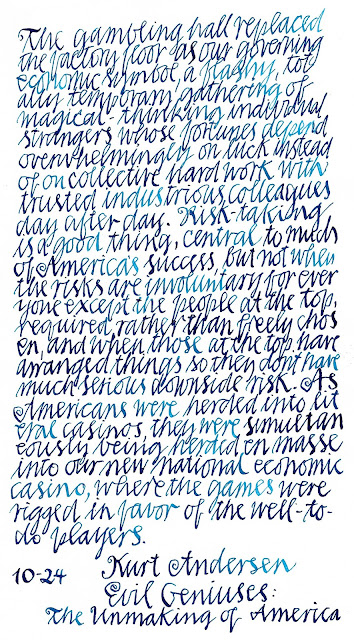 After reading several books by black authors, I was at times outraged, at times frustrated, at times both over the state of race relations in the US.  I had always known about slavery, of course, but even as an American history major I had never heard about many of the darker aspects of our sorry past.  My eyes were opened, but the negative emotions were overwhelming.

Somehow I got the idea to read Barack Obama's first book, Dreams From My Father, written in 1995 when he hadn't achieved any public prominence.  Of all the authors who grappled with the dilemma of being black in America, Obama seemed to me the most thoughtful and nuanced.  If you can only read one book about race and social justice, read this one. 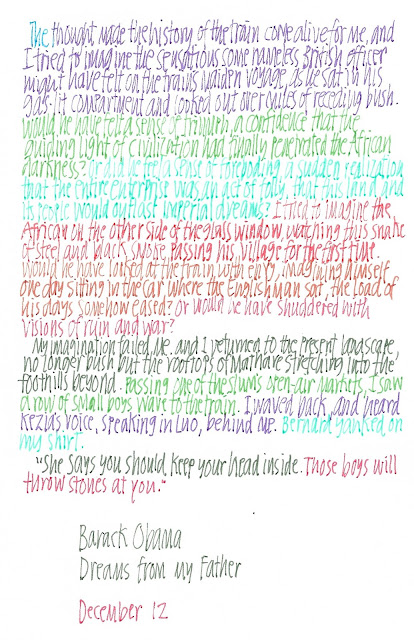 But my nonfiction reading wasn't all heavy and discouraging.  I loved The Wave, by Susan Casey, who finds existential meaning in rogue waves, tsunamis and giant wave surfing.  Unless you live in a low ranch house on a barrier island, this is wonderful escapism! 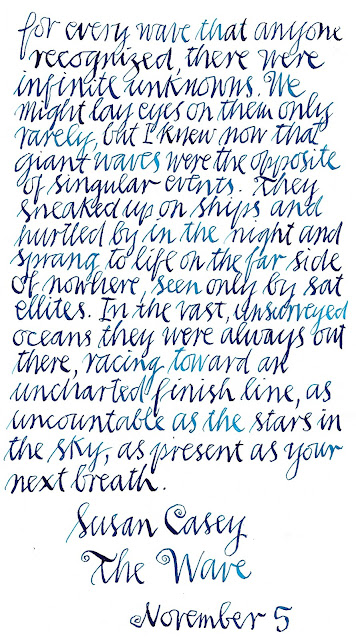 I won't recommend fiction, because tastes are so varied that the book I love is very likely to be one that you wouldn't read if they paid you.  And vice versa.  But I confess that having to write down every book I read has been a subtle nudge in the direction of less trashy trash, which makes me proud.
Despite doing a lot of reading in 2020, I chalked up a lot fewer books than the year before -- 59 books, compared to 79 in 2019.  That's because in 2019 we spent six weeks on cruise ships, mostly crossing the ocean rather than doing port calls every day.  That means a lot of time to sit on the balcony and read.  By contrast, during pandemic I spent many hours in the studio and in the kitchen instead of with a book.
I'll keep up the book diary this year, so if you every want to check up on what I've been reading and see if it's up to your standards, look on my daily art blog.  This link will show you just the weeks in which I had a book diary entry.
Meanwhile, what have been your favorite books from the last year or so?
Posted by Kathleen Loomis at 5:28 AM