The Huntington Library, also in Pasadena, surprised me. We had been told about its collection of old books (I like old books as much as the next person, but had flown across the country to see art, not books), its gorgeous gardens (ha ha, with the fourth and worst day of torrential rain well underway), and its trove of Gainsboroughs and other 18th century British portraits (what could be more boring than Blue Boy and Pinkie). By the way, everybody thinks of BB & P as being a pair, but they aren’t – only their showing up in the same museum in the 1920s made people think that.

I thought this might be the day when I should have slept in and skipped the festivities.


Was I wrong! Our first stop was a special exhibit of color lithographs, which doesn’t sound very exciting but occupied us for almost two hours. It was a survey of how the lithography process was used in American business for ads, packaging, posters and other ephemera. In effect, it was several shows in one: a history of the American economy, a process tutorial on lithography, a reflection of a century of popular culture, to name some aspects that I found fascinating. Granted, my professional interests in printing and history made me a sucker for this stuff, but I don’t think you need those inclinations to find something to learn and enjoy. Did you know, for instance, that Mr. and Mrs. Butterick invented paper dress patterns in 1863 and printed them with, yes, lithography? The exhibit is up through February 22 and it’s worth the shlep to the far end of the grounds, even in the rain.

Then we slogged across to the American art building, which had a lot of portraiture (not my cup of tea) and some nice stuff from early 20th century. My favorite piece was a huge, brilliant painting by Helen Frankenthaler; also was struck by a Diebenkorn and some Robert Motherwell drawings which he made by applying ink heavily with a brush to an absorbent Japanese rice paper, then going away and letting it wick and spread as it wanted. 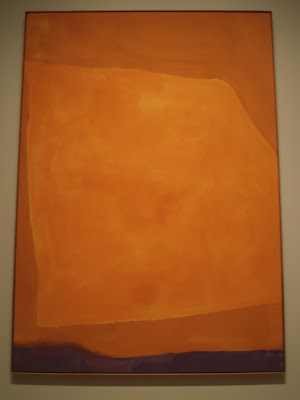 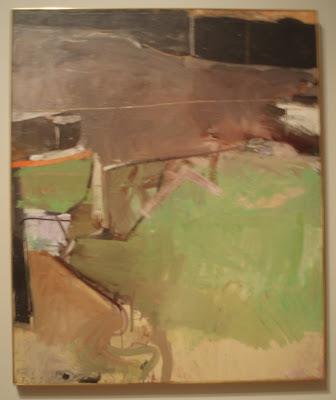 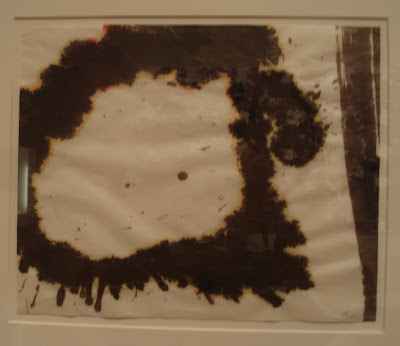 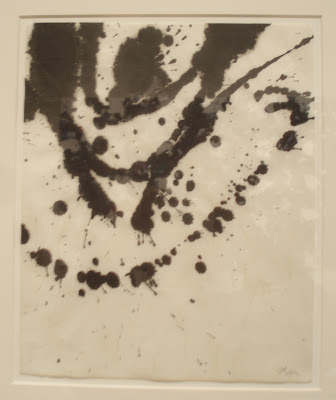 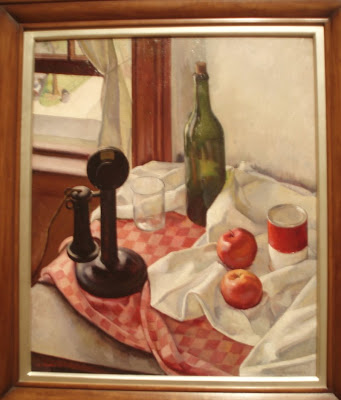 I'm always happy to find a Lucioni in a museum because I happen to have inherited an etching by him, probably the most prominent artist whose work I own (with the exception of a Picasso lithograph which was probably done in an edition of 732,000).


That was fine, but the best was last – a Gutenberg Bible! When Henry Huntington bought it in 1911 for $50,000 that was the most that had ever been spent for a book. The most recent sale of a complete Gutenberg was more than $5 million, in 1987, and single pages now sell for as much as $100K. It’s a beautiful piece of printing, perfectly preserved, bright white (it's on vellum, not paper) and I felt as though I was in the presence of ----- somebody/something transcendental. 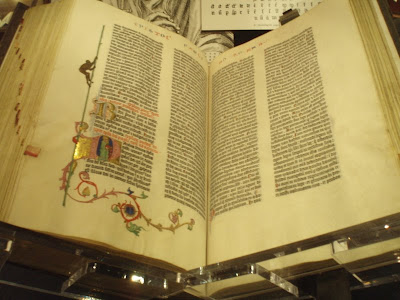 Also a huge collection of other important books, which I didn’t have time to look at carefully, including originals of Chaucer, Galileo, Shakespeare, Milton, Copernicus, etc. etc. Nicely displayed, given the fact that they have to keep the light very dim to preserve the books.

I must give a shout-out to the Huntington for its people. Unlike the gestapo at the Norton Simon, the attendants here were the nicest museum staff I’ve ever encountered. When we came in dripping, the attendant tipped us off to the lockers at the end of the hall. In another building, there were no lockers but the guard said he’d be happy to keep an eye on my wet poncho if I just stowed it in the corner on a rug alongside other people’s umbrellas. I knew there was no photography in the lithography exhibit, but asked whether it would be OK to shoot the large wall signs with lots of good explanatory info; the guard cheerfully went to track down the curator and ask (they said yes).

So this made five for five for the week. Not a bad batting average.
Posted by Kathleen Loomis at 11:17 PM