We hit five museums in five days on our recent trip to Los Angeles. I’ll tell you about them today and in subsequent posts.

Museum of Contemporary Art ( MoCA) has two branches in downtown LA, one kiddy-corner from the new Disney Concert Hall (designed by Frank Gehry) and one right across the street from the new Metro stop in Little Tokyo. It’s about a 20-minute walk between the two, but on weekends there’s a free shuttle if you show your ticket, which is good for both places.

Last week the special exhibit was a greatest-hits from the permanent collection, and what a wonderful collection it must be! A whole room full of Rothkos, almost a room of Franz Klines, a few lovely Johns and Rauschenbergs that left me wishing for more. 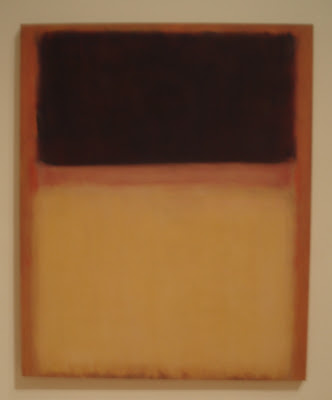 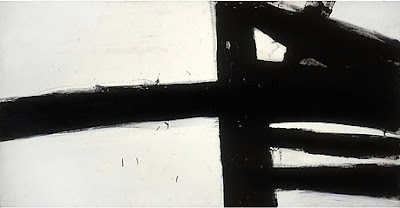 I was thrilled to see a conceptual art piece by On Kawara, “I Got Up,” which I had seen before, and which had a huge impact on my art. It consists of a series of postcards, one sent every day. The cards are standard tourist souvenirs from New York City, rubber-stamped with the words “today I got up at, ” the date, and the time. (It’s an interesting commentary on the artist’s life that he sometimes got up in the PM rather than the AM.) 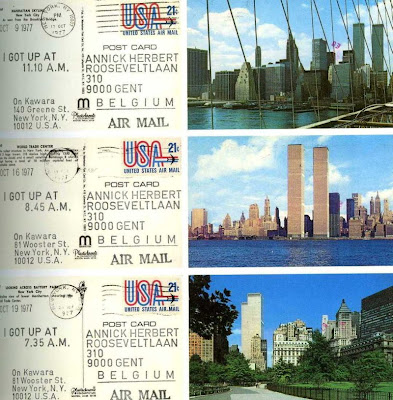 I saw this piece for the first time in 2002 at the Stedelijk Museum in Amsterdam, in a retrospective of conceptual art from the 60s. Before visiting this show I had no idea there even was such a thing as conceptual art, but by the time I walked out the door my mind had been exploded! This piece was the reason I embarked on my daily-postcard project the following year, and seeing it again was like visiting your great-grandmother whom you hadn’t seen in a decade.

Kawara's postcard project went on for many years and various museums have only small portions of it.  The bit at the Stedelijk had cards addressed to Kawara's dealer in Europe.  The bit in Los Angeles had cards addressed to artist John Baldessari.  Since they were behind glass, I was unable to get a decent photo, so found this one online.  Same wording and format. 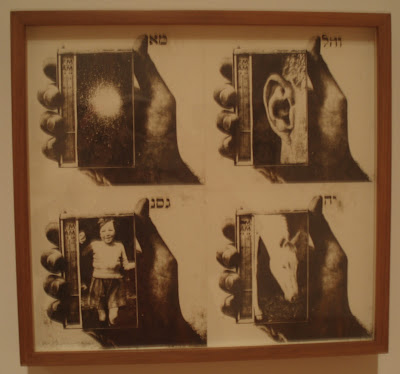 Here's one panel from a very extensive series of photos (or photomanipulations, not sure how they were executed) that all use the same format: a hand holding a device with a different photo each time it's presented.  The pictures were made in 1966 and the device was a small AM/FM radio.  Us geezers remember when transistor radios small enough to hold in your hand were something pretty cool.  The thought of replacing the speaker with a photo was probably pretty clever in the day.  Today, of course, it's just an iPod Touch with some funny numbers on the edge.


Finally, my nomination for the most startling art I've seen all year (I know, it's still January....). 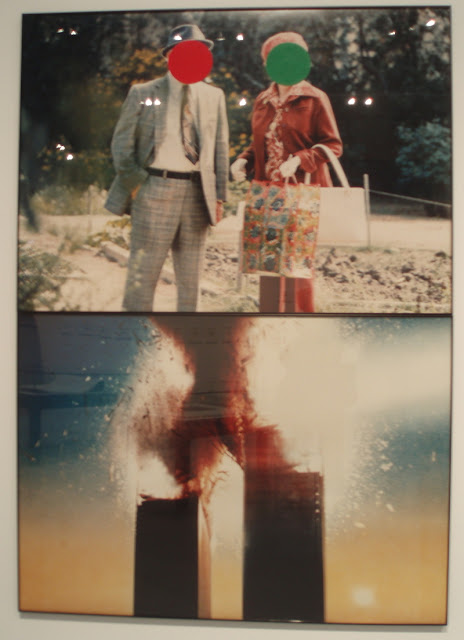 The docent thought the "twin towers" were a small model made for low-end movie special effects, but didn't sound 100% confident in her story.  Who knows!  Baldessari made the piece for an exhibit on relationships, and apparently the couple on the top were supposed to be the main subjects of the picture.  Today, of course, we are riveted by the burning towers.  MoCA has only recently put the piece on display for the first time since 9/11.


Posted by Kathleen Loomis at 9:16 PM