I've written in the past about internet friends and how pleasant it is to meet them in person if the fates smile on you.  Let me tell you about one of my earliest -- and most distant -- internet friends, Olof Davidsdottir, who lives in Iceland.

In 2003 we took a trip to Greenland which started off with a day of free time in Reykjavik.  I knew that Olof, one of the frequent participants on the Quiltart list, lived in Iceland so I emailed her and asked for suggestions about what to do while we were there.  To our absolute delight, she asked where we were staying and said she'd pick us up.  She gave us the city tour, including the only quilt shop in Iceland.  Then we picked up her husband Snorri from his work and drove to Thingvellir, a national park/magical place about 20 miles outside of Reykjavik.

You may know that Iceland has the world's oldest parliament, which first met in 930.  Until 1789 the parliament met at Thingvellir, an open-air venue that still has remains of rock slabs where prominent families would pitch their camps when parliament was in session.  Yes, they continued to meet outdoors all that time.  You had to be tough to live here!

Thingvellir sits on the rift between the North American and Eurasian geologic plates -- which means you can stand with one foot in North America and the other in Europe.  The land shows many signs of geological turmoil, such as lava rock, chasms and upthrust rock fissures. 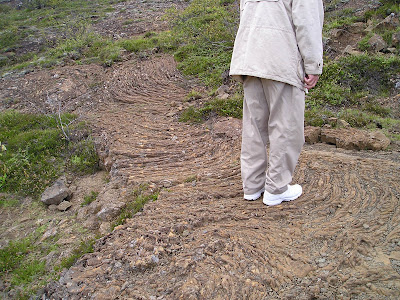 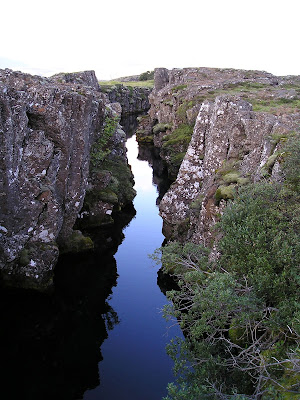 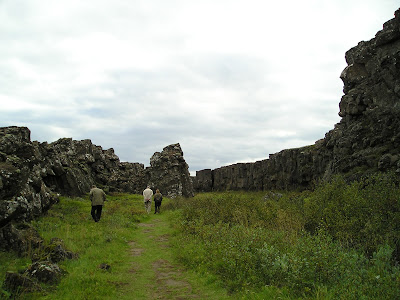 Olof's husband, my husband, and Olof walk ahead through the rift

As we explored the site, Olof took us to an area where her family would camp when she was a child.  How much more intimate and wonderful than the commercial guided tours!

I had asked Olof if I could bring her something that was hard to get in Iceland and she asked for Schmetz topstitch needles.  Even with several Schmetz packets and lunch, it was the cheapest and greatest five-star tour we've ever taken.

So fast forward to the present; Olof and I have stayed in touch by email and having perfect English, she reads my blog, although I can't read hers.  But she has started video blogging as well, and last week she responded to my recent post about striped fabrics.  She's speaking Icelandic, but has provided English subtitles, so all us underachieving monolingual dolts can get the message too.