Merry Christmas! or whatever...

We have two shoeboxes in the hall closet labeled "Christmas cards" -- the ends and dregs of decades worth of card purchases.  I've always thought it was classy to buy new cards each year, so that all of them would match.  Kind of a dumb idea, when you think of it -- I don't suppose our friends from San Francisco are likely to be examining the cards hung from my sister's mantel in Virginia and noticing that they didn't get the same model.  But we persist.

This year we found ourselves under unexpected stress, since my surgery.  I'm recovering very well but am exhausted much of the time, certainly not up to a trip to buy new Christmas cards.  So we hauled our shoeboxes down and inspected them to see if we could make do with our existing supplies.  Any Christmas card that could be associated with an envelope went on the pile.  Some were more than 40 years old, bought when we lived in Germany.  Some were singletons, others had several copies.  Some were big, some were little; some had Madonnas, others had Santas.  Some said Merry Christmas, others Happy Holidays.  We had fun matching cards to recipients, using big ones for those with letters, small ones for those needing no additional messages.

I recall a few years ago when some friends did a similar project, except theirs were the giveaway cards they had received from charities in fundraising efforts.  Our friends' message was apropos: they warned us that their greeting was not to be taken as an endorsement of any charity nor a suggestion to contract the disease in question.

To all my internet friends, please accept my very best greetings for your holidays, whatever kind you celebrate.  Want a manger scene?  Want a menorah?  Want a cute little dog on the snowy rooftop?  Want an original UNICEF art card?  Think of what would make you happiest, and let's imagine that I'm sending it to you right now. 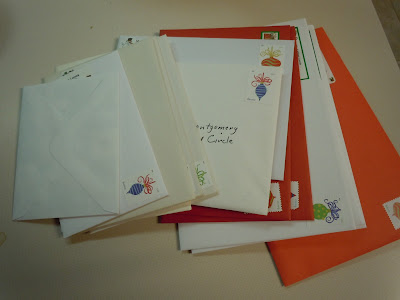