Interweave Press, which publishes Quilting Arts magazine, also puts out an e-magazine called Quilting Arts In Stitches, and I am one of the featured artists in the new issue.  I talked and wrote about my daily art project of hand stitching, and provided tutorials on some of my favorite embroidery stitches.  Here's an excerpt.

I admit to having felt technologically obsolete when the folks at Interweave sent out emails asking the artists to blog about the new issue.  The magazine is available only on iPad, and since I don't have one, I can't even read it.  They did send me a pdf of my own article, which I thought was pretty nicely done -- I don't mean to compliment myself, but to compliment the photography, layout and design by the Quilting Arts people, who always put out a high-class product. 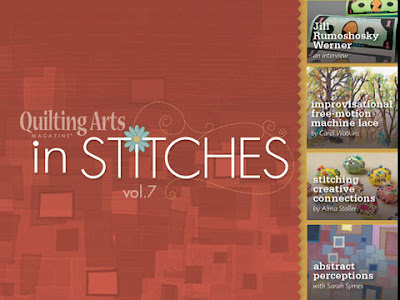 I was a bit surprised to find that the magazine was published exclusively for iPad, and apparently I wasn't the only one, because after the new issue was announced, there were questions and complaints.  Interweave explained that software companies are putting all their development money into tablet technology, not into stuff for desktop computers.

"As a result, it costs a tremendous amount of money per eMag to build it for an acceptable PC/MAC viewing and reading experience and the sales numbers couldn't continue to support this effort," they said in July.

But apparently the questions and complaints continued, and Interweave blinked!  "Due to overwhelming demand from desktop eMag readers, we have decided to release Quilting Arts In Stitches volume 7 for the desktop.  All of the eMags going forward will be offered for both desktop (Mac and PC) as well as for the iPad."  In addition, they're revisiting several publications that were issued earlier this year for iPad only, and making them available for desktop.

This strikes me as an excellent decision.  Considering the demographic of people interested in art quilts, I suspect a lot of them are like me, iPad-less.  It seems counterproductive to limit the distribution of a high-end product to a single platform, thus ruling out a significant portion of one's potential audience.

So those of you who do have iPads can get the magazine right now.  Those who want to read it on their old-fashioned computers will have to wait a bit till that version is available, but I'll let you know when that happens.

And by the way, doesn't it make you feel a bit decrepit to remember that not so many years ago, desktop computers were cutting edge, not old-fashioned?  Having been an early adopter of WYSIWIG in the previous century, I cling to my self-image as avant garde, not hopelessly behind the curve.