Last year I resolved to do a bunch of collaborations with other artists, and managed to complete ten projects in photography, embroidery, collage, quilting and calligraphy.  Several of those projects were what pre-school teachers call parallel play, in which the collaborators make their own work on a common theme.  But a few were shared efforts, in which both people actually worked on the same piece of art.  I found the latter kind more challenging and in some ways more rewarding.  So I was happy to accept when Rosemary Claus-Gray, a good friend and fellow fiber artist, invited me earlier this year to do a hand stitching project.

The rules of the game were that we would each start stitching on a 12-inch-square ground.  We were to make some kind of map, but it could be literal or metaphorical.  After a while we exchanged pieces, but without telling the other what the map was about.

Rosemary has been far more diligent than I in working on this project; she's done her bit on my piece and sent it back to me.  I put in some finishing touches and I think it's complete. 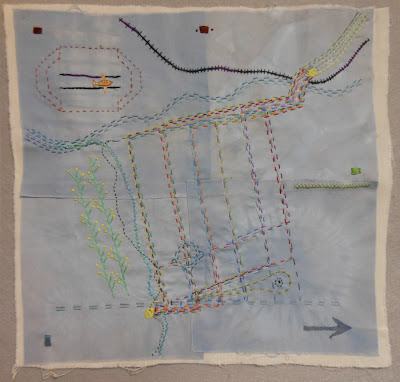 After she sent the piece back I told her that the map shows many of the different routes that I can take between my house (the yellow square at top right) and the post office (the yellow square at center bottom). There are lots of different ways to walk, and since I've lived here for 26 years and have walked to the post office a bazillion times, I'm always looking for a bit of variety in my route.

Rosemary added a bunch of different paths, all of them more curvy than my city street grid.  I was particularly happy that she added a wide street going past my house and out the top corner of the piece. 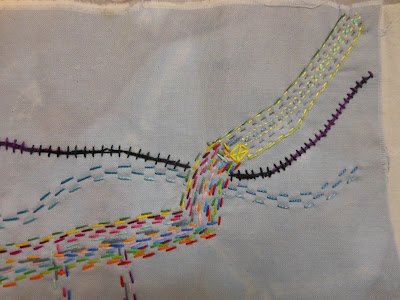 In reality our house is at the bottom of a cul-de-sac, blocked by a creek, and I can't tell you how many times I have wished we could simply teleport across the creek and be on our way instead of taking the long, three-right-turn way around.  So Rosemary fulfilled my wish without even knowing what it was!

I should have planned a bit more before I started mapping my grid onto the fabric, because I had a lot of empty space around the edges.  I filled in one of the big spaces with feather-stitched flowery vines before I sent it on to Rosemary.  She filled in another with a little airport. 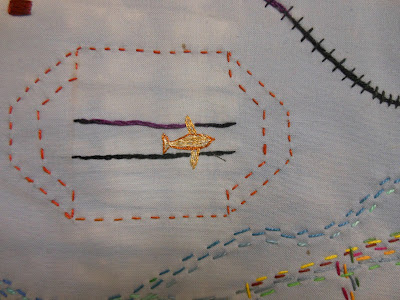 Aside from the flowery vines, I was pretty literal in my first pass at the map.  The only things I stitched were the streets and the routes.  But when the piece came back to me, full of fantasy, I found myself freed to use whatever shapes and lines popped into my head.  I suppose that, in a nutshell, is why people collaborate -- the other person's imagination lifts you out of your own mental habits and ruts, in ways that you might not achieve on your own.

Now I have to get to work on finishing Rosemary's piece and getting it back to her.  I made a good start on it when it first arrived, but have been submerged in quilting for the last couple of months and neglected my other projects.  I'll take photos, of course, and will share them with you when she declares her piece complete.


Update:  I linked this post to the new blog site that shows what a bunch of other fiber artists have been up to this week.  Please check out their work!