I wrote yesterday about a beautiful prayer shawl or tallit that fiber artist Felice Sachs made for Ellen Shaikun, using blouses that belonged to Ellen's late mother.  I was privileged to be present when Felice and Ellen brought the last and most important part of the tallit into being.

That's the tzitzit, the ceremonial fringes that are attached to each corner of the prayer shawl.  Deuteronomy instructs, "Make tassels for yourself on the four corners of your garment which you use for protection."  Obeying this command, Jews tie fringes to their shawls following strict procedures that Felice calls "ritual macrame." 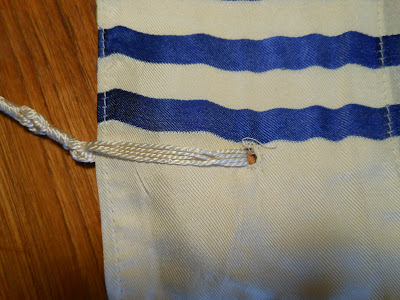 The first step is to put a hole in each of the four corners of the tallit to hold the fringes.  Most tallit simply have punched circles, as shown above.  But Felice put a buttonhole salvaged from the blouses in each corner. 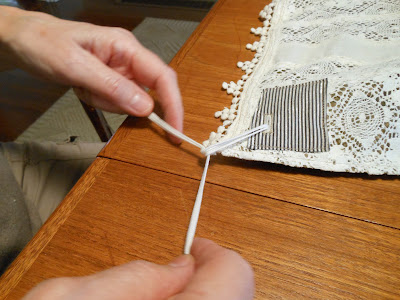 To make the fringes, you buy a kit with special wool yarn, usually made in Israel, cut to specific lengths.  For each corner you make a bundle of four strands, with one extra long strand called the shamash, the "leader" or "protector."  You thread the four strands of yarn through the punched hole, even it out (the shamash will hang much longer than the other seven strands), and tie a square knot with the two sets of yarn.

You repeat these steps -- winding, then a square knot -- four times.  The second winding has eight wraps, the third has 11 wraps, and the last one has 13 wraps.  Finish off with a square knot and you're done. 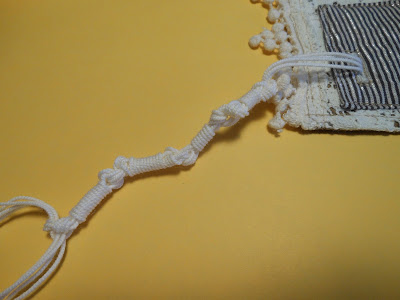 Ellen wanted to tie some of the fringes, of course, and found it easier when Felice held the bundles taut; four hands work better than two when doing complicated wrapping and tying.  Each time a set of wrapping was finished, they would carefully count the wraps to make sure the number was correct. 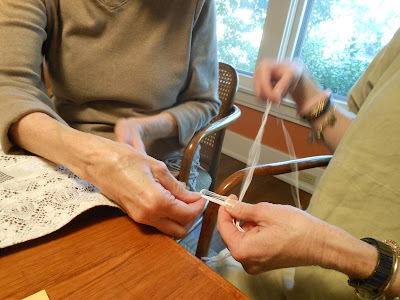 The numbers of cords, knots and wraps are symbolic of many things from Scripture and tradition.  For example, the four fringes symbolize the four corners of the earth; winding symbolizes the unity of God; the number of cords and wraps adds up to the 613 commandments in the Torah.

No sooner had Ellen finished the last knot than she was off to synagogue for evening services, almost at the end of her eleven-month ritual of mourning her mother with daily prayers.  It was exciting to see her with her new tallit, wrapped again in her mother's arms.