For the last couple of weeks I have been following along with one of my internet friends, Margaret Cooter, as she prepares for her thesis show at the end of an MA course in book arts.  I have been so impressed by the artistic quality of her work, and by the intellectual rigor with which she is articulating her vision and how the individual pieces fit in with her overall worldview.

I'm also cognizant of a potential obstacle in her very near future: what to do next.

I've been reading "Art and Fear," a classic book on the many, many ways that artists shoot themselves in the foot.  The authors talk at length about people who quit.

"But curiously," they write, "while artists always have a myriad of reasons to quit, they consistently wait for a handful of specific moments to quit.  Artists quit when they convince themselves that their next effort is already doomed to fail.  And artists quit when they lose the destination for their work -- for the place their work belongs."

I find the second of those descriptions most relevant to my current thoughts.  The authors note that artists often hit the wall right after a significant accomplishment: a big solo show, a major commission, writing a book, and more to the point, graduation.  For months if not years, they have been working toward this huge goal, and now that it has been reached -- nothing is left.  The goal has been so all-consuming that it has consumed not just the person's time and energy but her creativity.

I know several people who worked diligently toward a degree, put together an impressive thesis show, and since have done not much.  Instead of a gateway, the degree became a gate, which has apparently taken too much effort to open.  I'm thinking about the same potential situation in my own life, now that I'm on the absolutely last steps toward completing the Quilt National entries that have occupied me all spring and summer.  And I know from reading blogs and emails that a lot of other people, having worked very hard toward QN and Fiberart International, are at the same point.  A few have confessed that during the long mindless hours of quilting they've been having doubts as to whether their work has value and whether they should be doing something else. 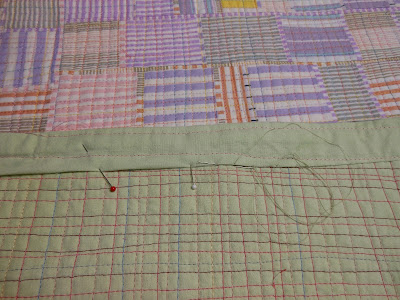 So what next?  Of course, once you finish a huge task you allow yourself some relief.  Yesterday, in between working on facings, I indulged in a couple of hours cutting up an old book for found haiku, and vacuumed the studio.  I went to bed early and read a trash novel.

But I'm already planning my next art project.  I'm very fortunate to have a bit of creative energy left over at the end of this long marathon.  I wish the same for all of you who are about to close the door on one chapter of life and open the door to another.