Last year I had a project with my friend and art pal Uta Lenk in which we sent each other pictures of "found art" every week.  Sometimes the found art was simply a reflection or a patch of picturesquely peeling paint, but sometimes it was actual "art" found in an unexpected place.  In Rome last summer I was walking along the Tiber and was surprised to look across the river and see these mysterious figures on the embankment on the far side. 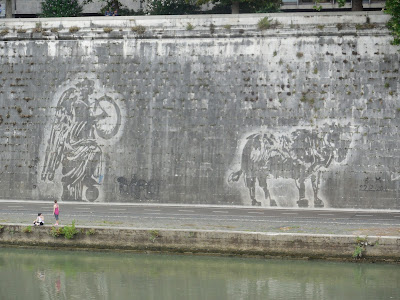 I sent the photo to Uta and promptly forgot about it, until yesterday I saw an announcement that artist William Kentridge is going to do a huge public art installation along the Tiber next year.  Apparently what I saw was a test for the real project.

Here's a rendering of what it's going to look like:

The images are in effect made from dirt: a stencil is placed over the embankment wall and a high-pressure hose is used to power-wash around the edges.  What's left is the natural patina (fancy artspeak for dirt) of the wall, and as time passes more dirt will accumulate, eventually obscuring the figures.

Meanwhile, the frieze will extend more than a third of a mile and be illuminated at night.  According to the release, it will include "scenes of war, kings, victory, mythology, and devastation."

And I saw it first!!


Posted by Kathleen Loomis at 5:33 AM