My parents each had one brother, but my dad's brother drowned at age 19 and my mom's brother for some reason became semi-estranged from the family and moved to California, which might as well have been on the other side of the earth.  The concept of "uncle" was exotic to me -- yes, there was Uncle Irv, whom I met in person once for an evening when I was 7 or 8, but he wasn't really a part of my life. 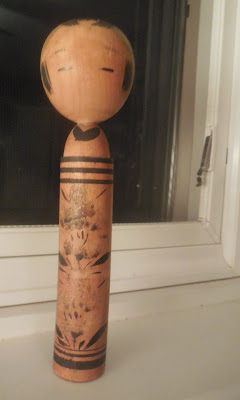 Uncle Irv did send presents once in a while, and one of them, a wooden Japanese doll, is still in my office, standing in the window to keep watch.  I suspect it was made in Japan after the war.  It's well made; the head turns a bit on the neck but in 60 years has never gotten wobbly or fallen off.  The brushwork of facial features and floral motifs is delicate and beautiful.  I don't know what it says on the bottom; perhaps the artist's signature? 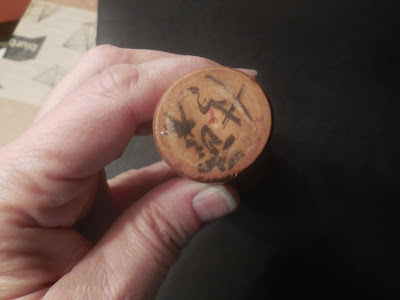 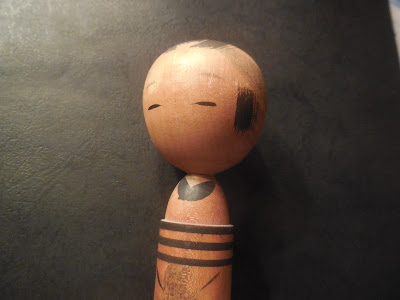 Why have I kept it so close all these years?  I think it has less to do with my desire for family connection (my sibs and I kind of liked being an isolated nuclear family: no tiresome big family gatherings, no cousins for rivals, much more adult attention for us) than with a taste for sophistication.  Living in small white-bread Michigan towns didn't offer much diversity or excitement, but Japan ---         Japan was even more cosmopolitan, foreign, faraway, thrilling than Berkeley!   What kind of a wide world was out there, anyway?

As time went by I got to see a whole lot of that wide world, including Japan, where I'd wanted to visit since childhood.  Did Uncle Irv's Christmas present kindle that desire?