My paternal grandmother played the harmonica, but she called it a "mouth organ."  As a kid I was terribly impressed that you could get tunes out of a tiny box (somehow I wasn't quite in awe of getting tunes out of the large box piano).  I'm sure she never had a music lesson in her life and I don't know where she learned to play the harmonica.  I don't think she had a very large repertoire; the only tune I recall her playing was "Home, Sweet Home." 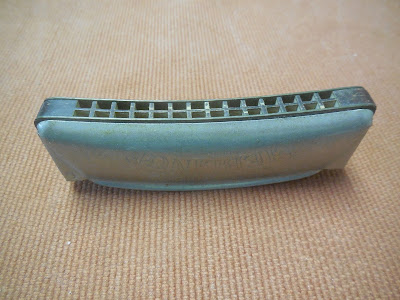 But the harmonica was a part of our bedtime ritual (we lived with her until I was five), along with several songs in German.  The one best remembered is "Müde bin ich, geh zur Ruh," a traditional child's bedtime prayer ("I'm tired and going to rest...).  The way we pronounced it, the name of the song was "meedee beenee."

Although everybody in my grandmother's generation (all born in the US) was bilingual, they spoke German in the home and in the church.  But they largely abandoned it during World War I.  It was my father's first language, but he switched to English at age five when we entered the war and never was very fluent despite a lot of time spent in Germany in later life, as a soldier, teacher and tourist.

By the time I came along, German was used for bedtime songs, for talking about things that children shouldn't hear, and for the occasional curse.  When I got to college and took German I once asked my grandmother why she hadn't taught me German in infancy; it would have been so simple.  She said it never dawned on her that an American child should speak anything but English. 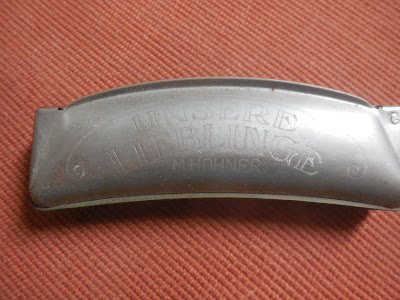 Her harmonica was made in Germany by the Hohner Company and was the "Unsere Lieblinge" model -- "Our Sweetheart."  The writing is faint, worn down by years of use.  I found several on eBay advertised as 80-90 years old but I'm sure this one is a lot older.  If you still have the original box you can get $75 or maybe even $95, but I'm not going to sell mine.