I've been cleaning my studio since Christmas, taking an occasional break to make some minimal art but nothing serious.  I'm now accumulating my fourth batch of fabrics to go to the guild for charity quilts (and when I say "batch" I mean at least five cubic feet, maybe nine or ten...).  A huge pile of non-quilt fabrics is waiting near the back door for my friend who teaches high school art -- boxes and boxes of drapery and upholstery samples, fabrics too heavy or flimsy for the quilt guild, miscellaneous stuff of many descriptions.

I keep encountering boxes of things that I have carefully bundled up, sorted and packed away over the decades, because that's the kind of person I am.  (I don't think it reaches the level of "hoarder" but maybe I'm wrong.)  Like everybody I know who sewed garments, I would fold up the leftovers, tie the bundle up with a bit of selvage, and put it into storage.  My mother did it this way, my grandmother did it this way. 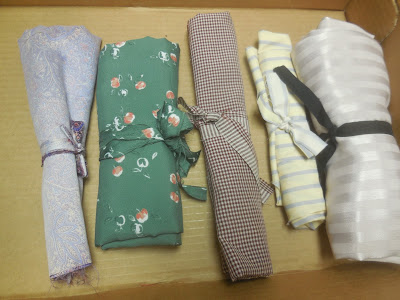 In retrospect, there doesn't seem to be much reason to do this.  What were we going to do with the bits?  I suppose you could theoretically make a patch if your blouse got a rip in it, but in all my 40 years of garment sewing I never knew that to happen.  But that's the way I did it.

It's been at least 20 years since I decided to give up garment sewing to concentrate on quilts, and 99 percent of the garments are long gone, but still all those little bundles were packed neatly away in boxes, neatly labeled as "silky remnants."  (Not silk, of course, but polyester...)

And last week, encountering them in my new spirit of divestiture, I realized that I should and could throw them away, as I arguably should have done in 1992 -- or maybe 1972.  I found the leftover bits from my wedding dress, and from multiple maternity dresses, and from the curtains and crib bumper pads from our first baby's bedroom.  I found many larger packages of garments that I had cut out and partially sewed together (or not) decades ago.  They all got tossed (well, not the wedding dress...)

And then in another box, just days later, I found the pattern for the wedding dress! 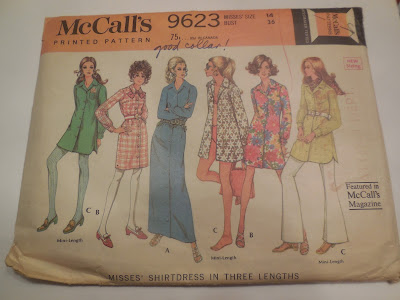 I kept that, too.  One of these days I expect I'll find the wedding dress itself, which I KNOW I never would have thrown out, but has been MIA for decades.