Where are these people coming from?


My art book club that never reads books had the assignment to do daily art for 30 days.  I didn't want to choose a project that was too similar to the cutting-and-pasting that I'm doing for all of 2017, and I flashed on this little papier mache person that I made on a play day last summer.  She never got put away and has been hanging around my sewing machine table for months. 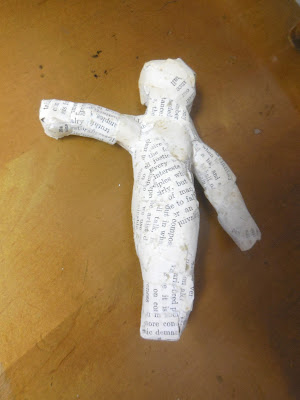 I liked the way I had constructed her by making an armature of rolled-up stuff, then wrapping the pasted paper around the armature.  And thought I could do the same thing minus the pasted paper.  Voila, a bunch of little people made (mostly) from rolled fabric and wrapped up with yarn, thread or cord. 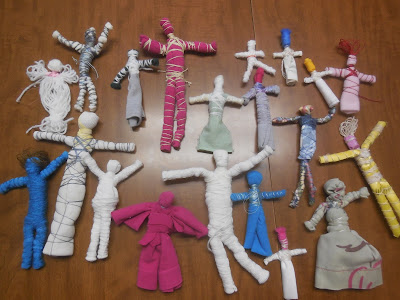 The rule was to use material that was lying around, a task that has gotten much easier since I've been cleaning my studio and divesting a lot of my fabrics.  Bits that were too small to give away often became daily people; they got wrapped and tied in whatever cording or thread happened to be out on the table from other projects.

After I made the 30 people for my book club meeting, I was surprised to find myself making another one the next day, and several more have followed.  Apparently they want to keep coming. 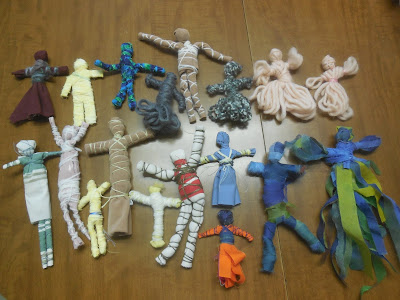 I'm delighted and astonished at how these people have sprung from my unconscious.  I've never worked much in 3-D, and certainly not to make figures.  Some of my artist pals have noted a similarity to the Adam and Eve figures that I drew for several weeks last year.  I don't know why I didn't stop after book club show-and-tell, or what this project is telling me about myself.

I guess I'm going to be making lots more of these guys and have started to think about how I'm going to display them.  I want them to all be standing around in a crowd, maybe watching something happen or posing for a huge group photo.  I'll need some kind of support for each one, because most are not rigid enough to stand up by themselves.  Not sure how this is going to work out but clearly I'm being compelled to keep making.