On Thursday I exchanged emails with an internet friend who said she was going to the big Dallas Quilt Show the next day.  I replied that I thought she was brave to go.  On Friday she wrote to say they had canceled the show!  A few people had gotten to attend the preview reception on Thursday night, and one of them got this photo of the best in show winner, by Karen Stone. 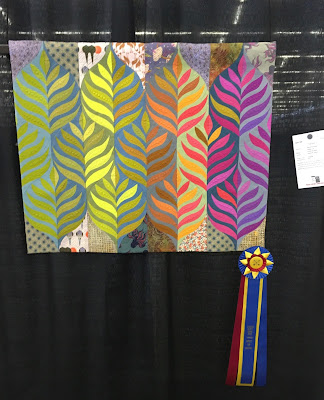 So my question is: why did they wait till the city government banned all large gatherings?  Why not realize this was a bad idea four days earlier, before the show was hung, before the vendors set up, before the food service was stocked, before people got on airplanes to come?

In fairness, things are moving quickly, and the decision that seems no-brainer obvious today might have seemed wildly pessimistic the day before yesterday.  But I think pessimism needs to be our new default, at least until we learn more about how the disease operates and how well we can mobilize against it.  Last week I was the one to suggest, in three separate groups and organizations, that it's time to cancel our meetings, close our gallery, stop getting together.

If I were 40 years younger and needed that paycheck, I would be thinking in a different vein, focusing on how to protect myself when I went out in public.  But since I and so many of my friends have the luxury of staying home, it seems that staying home is not only self-protection but public service.  And I'm telling everybody I know that they should be staying home too.  They say citizens have to step up and help during emergencies, and my role, apparently, is to be a canary in the coalmine.

Listen up, people!  If you don't have to go out in public, don't!  Researchers have been modeling the potential progression of the disease in hard-hit Seattle.  They said with its current rate of spread, we can expect 400 deaths in the next four weeks.  But if the transmission rate could be reduced by 75 percent, mainly through social distancing, we would expect only 30 deaths.

I don't usually watch TV news or C-Span but my husband does, and I have been listening in more frequently than usual when the talking heads are talking about the coronavirus.  It's clear that uncertainty is high in every aspect of this crisis.  How does the disease work?  When are people contagious?  How long does the virus stay active on a surface?  And of course, the big one, can I get tested?

In the absence of reliable information, you get complacency on the one hand, and panic on the other hand.  Neither one is helpful.  So I was happy to see that the New York Times, which has done excellent reporting on the crisis so far, has removed the paywall from its coronavirus coverage.  You can access it here, and the site is updated around the clock for the most recent news.

I have been worrying about my sister, currently enjoying a vacation at a nice resort in Mexico.  That is, when she isn't worrying.  We've exchanged several emails in which I urged her to come home early, and a few minutes ago I was greatly relieved to hear that she has rebooked and will be coming back tomorrow instead of on  April 1.   I will feel even better if I have made you and my other internet pals think twice about that book club meeting, that concert, that trip to the fabric store.  Work from your stash.  Stay home!!!

Posted by Kathleen Loomis at 2:10 PM