I feel like I'm in a disaster movie.  Last week it was like the first 15 minutes, when all the characters are going about their business, acquainting us with their lives and families and problems (and the audience is wondering which one is going to die first, which one is going to survive till the end).  This week we're in the next 15 minutes, when the volcano is starting to emit puffs of steam, a red light blinks on the nuclear reactor control panel, somebody leaves a wrench inside the airplane fuel tank, the serial killer grabs a woman and stuffs her into the back of his van.

Next week will probably be when all hell breaks loose, the volcano erupts, the crew can't control the airplane, the first body is found dumped in an alley.  And things go downhill from there.

Not even two weeks ago tomorrow I was cheerfully looking forward to a week in California, thinking about what handwork I wanted to take along.  Two days later I was no longer cheerful, and told my husband that I thought we were taking a big risk with the trip; the next morning we canceled.  We would have been coming home through the San Jose airport on Tuesday -- the day before two TSA screeners were hospitalized with covid.  I also canceled my April trip to Texas to teach at a guild -- a trip that we started talking about almost a year ago.

This week I had a full schedule of monthly meetings and gatherings come due.  I went happily to the ones on Tuesday and Wednesday, and to a long-scheduled meeting with our financial advisor this morning.  I had been planning on one shift at the gallery and two more meetings, this coming Sunday and Monday, and then into social seclusion.  But this afternoon my son convinced me that the time to pull the plug is NOW, not Monday at midnight.

I went to the grocery a few days ago and bought a huge load of pasta, rice, tuna, canned foods, dried fruit, nuts, toilet paper, dishwasher detergent and a couple of pairs of rubber gloves.  Last week we bought a new freezer, which was delivered yesterday evening, and today I hit the grocery again for a cart full of meat and frozen vegetables.  Thankfully I don't have to go full survivalist, because my sons are eager to do shopping for us, but we can get along for a while on what's on hand. 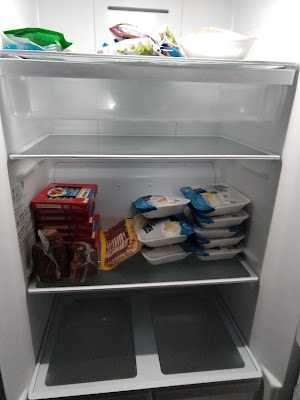 I wore a pair of gloves to the grocery and felt quite proud of myself, able to touch the cart, the refrigerator cases, the produce without fear of acquiring virus.  I loaded my groceries in the car, got into the driver's seat, took off my gloves -- and thought, oh crap!  Suppose I got virus on my gloves -- with my gloves on I just touched the door handle and the steering wheel, which I am now touching again with my bare hands...  this could drive a person crazy.

I came home, unloaded the groceries and washed my hands really well.  Do I have to use hot water to be really safe?  How hot?   I also washed the red peppers.  Does virus live on red peppers?  What about when I take the frozen corn out to eat in the future?  Does virus live in the freezer?  This could definitely drive a person crazy.

Two weeks ago I wasn't much worried -- or at least I thought we had a while of normal life ahead, to get ready and even to enjoy a last little vacation before hunkering down.  Today I'm in lockdown.  The stage has been set, we've met the characters, we've seen how the disaster got started (was it negligence?  should they have listened to the wacky seismologist who said the mountain was behaving strangely?  what if the cop had come around the corner a minute earlier and seen the killer grab the woman?) and now this movie is getting to the nitty-gritty.

Posted by Kathleen Loomis at 10:12 PM