Sanford Biggers at the Speed, part 1

The current blockbuster show at the Speed Museum is by Sanford Biggers, an African American artist whose shtick is to paint on top of antique quilts.  I have been somewhat familiar with his work for several years; in 2017 one of his quilts was in another show at the Speed, and I wrote about it in a blog post.

I found some things to like in that piece, but I had two big reservations.  First, Biggers made a big deal out of the false story that quilts were used as secret signposts along the Underground Railroad.  Second, it hurt to see a beautiful antique quilt in fine condition used as a canvas.  Surely he could have found a beat-up quilt to paint on!

So I approached the new show with some preconceptions, but resolved to keep an open mind.  I lingered over the artist statement at the entrance to the exhibit, interested to note that he has backed off from his fake-history Underground Railroad statements.  In 2017 the wall tag read "Some quilts were used as signposts for safe houses..."  Five years later, we read "he was intrigued by the heavily debated narrative that quilts in some way doubled as signposts..."  That's progress, I guess, and maybe in five more years he will acknowledge that this narrative is not heavily debated at all, just carelessly repeated by ignorant people.

But enough nitpicking, let's look at the quilts.  I didn't keep a tally, but it seemed that most of them were in pretty good condition and were simply painted upon and hung on the wall without additional support.  Some were in poor condition, and augmented by patching in pieces from other quilts, or collaging swatches of unquilted fabric, including several kimono pieces, on top. 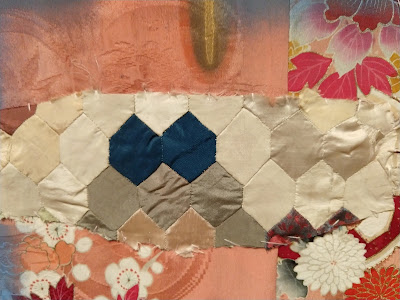 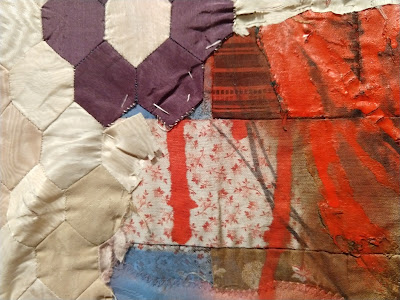 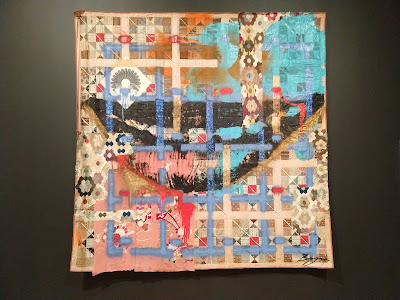 Sanford Biggers, Hat & Beard
Most of the quilts followed the same recipe: start with a quilt or quilt collage, paint loosely over the top, let the paint (or sometimes, tar) drip and blob.  Some of them had intricate and meticulous stenciled designs, but almost always some area of deliberate mess. 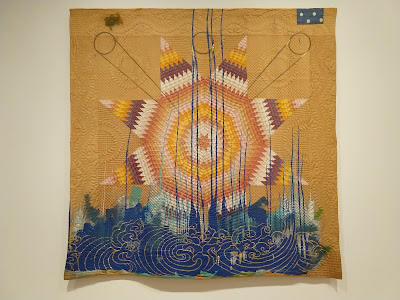 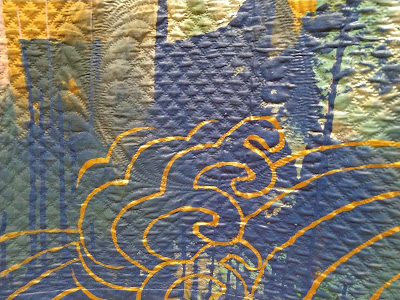 I can't describe the whole show in just one blog post, and probably not even in just two.  So stay tuned and I'll have more pictures and thoughts soon.
Posted by Kathleen Loomis at 11:35 AM