Another look at the "Southern Accent" show that just closed at the Speed Museum in Louisville.

Forgive me for sounding jaded, but one of the cliches of our stereotyped vision of the South is the quilt (you know, everybody's grandma made them...) and one of the cliches of the quilt is that old Underground Railroad myth.  How romantic to think that people would hang quilts on the line to point the direction to freedom or to mark the place for a free supper or a bed in the corncrib.  How romantic, but how silly, upon further examination: how many poor people just happened to have a quilt in the appropriate secret-code pattern on hand, and how would they hang it on the line when it was raining, and wouldn't vigilant sheriffs and slavers notice that the same people had a quilt hanging out every day? 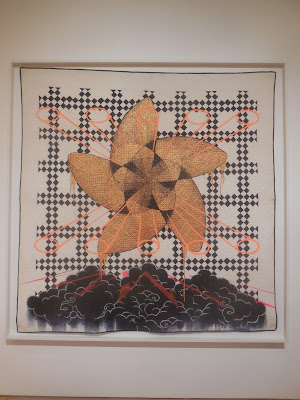 Sure enough, the signage on one big work in the show tells us -- falsely -- "Some quilts were used as signposts for safe houses along the secret network of routes from southern slave states to northern free states and Canada." 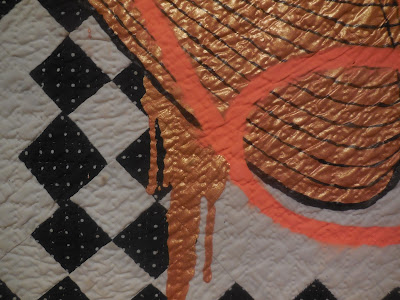 I am so sick and tired of hearing this fake news.  Only a few weeks ago I griped about it in my blog, in response to a review of work by -- well, well -- the very same Sanford Biggers!  So I wonder -- does the fake news come from the ignorance of the reviewer, as I had thought while writing that post, or does the artist plant it in his statements, as you would infer from reading the sign?

Oh well, let's talk about the art, not the propaganda.  He's painted with metallic and day-glo colors onto a beautifully made Irish Chain quilt, which incidentally is in pretty fine condition.  The quilt wasn't stiffened or stretched, just hung against the wall.

It was a striking image, especially the central curvy five-pointed star rising above the mountain horizon like a beacon in the sky, except that I didn't understand what all the protruding orange tubes were supposed to be.  To me they looked like gun barrels rather than rays of light.  I was also confused about those areas of gold paint that were dripping out of the star (as in the detail shot).  The rest of the image was controlled, even meticulous, and then here's this accidental blob....

More art from the Southern Accent show next week.


Posted by Kathleen Loomis at 5:19 AM