My great-grandmother, Wilhelmina, was born in Germany in 1841. Her fiance died before they could be married and she had a child when she was 20, but she was fortunate to meet another man who was happy to marry her and they had four other children.

Wilhelmina’s brother August emigrated to the US and settled in northern Michigan, and Wilhelmina and her family decided to follow them. They went to Bremen and booked passage but her husband died while they waited for the ship. Wilhelmina buried him, decided to proceed with the journey, arrived in New York on October 20, 1881 on the SS Ohio and made her way with the children to Tawas City, Michigan.

At about the same time her other brother, Ferdinand, and his best friend Wilhelm decided to come to the US as well, and they too went to Tawas City. Guess what! Wilhelmina and Wilhelm met and married and had two sons, one of whom was my grandfather.

I know the details of Wilhelmina’s journey because several years ago my husband found her in the great reference source  “Germans to America,” which gives the passenger lists and arrival dates of every ship that left Germany for several decades in the 19th century. Couldn’t find August, Wilhelm or Ferdinand, or many of my other ancestors in those books, but perhaps their names were misspelled or we had fallen asleep in the library and overlooked them.

A couple of weeks ago we were in Germany and found the little village, Lanze, where Wilhelmina was born. It’s outside the town of Lauenberg on the Elbe River in what appears to be a rich agricultural area. Even today there are barns inside the village, and cows grazing a few feet from the road. I was happy that they were Holsteins, my favorite cow, but not surprised, since after all we were in the state of Schleswig-Holstein. 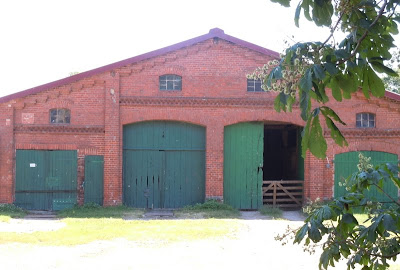 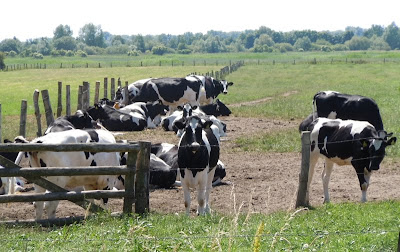 We had hoped to find a church and cemetery but a woman told us there was neither one. This confuses me – most of the tiny villages in Germany have their own churches, dating back to times when a two- or three-mile trek to church would have been very difficult. Perhaps it burned down? If Wilhelmina's people did indeed make the trip into Lauenberg, here’s the church they would have attended. 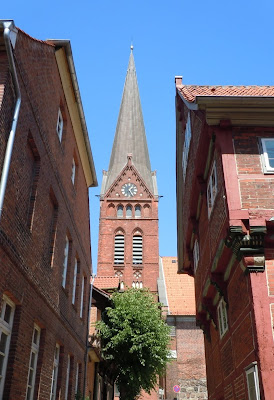 Just to make this art-related, here’s a little quilt about my great-grandmother called “Wilhelmina’s Memories” that I made several years ago using a bunch of miscellaneous stuff from grab bags, plus a piece of hand-dyed fabric. 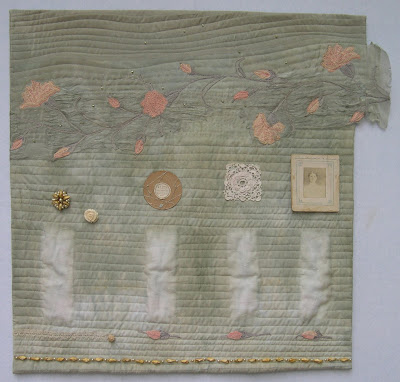 The photo is a flea market find; I don’t have any real photos of her. But to me the quilt suggests the courage with which she made the decision to leave everything behind and sail off into the unknown. Did she bring a few beautiful things, a spool of thread, some ivory buttons, a photo of her own mother? Did she ever wish she could visit the tombstones of the two men she loved and left dead in Germany?

Posted by Kathleen Loomis at 5:00 PM