Public transportation!!! Trains and buses go everywhere, all day and all night, pretty much on time. It’s easy to bring your suitcases, your baby stroller, your bicycle with you. The bus stop signs tell you exactly where the bus is going; usually an automated sign on board tells you which stop is next. The intercity trains let you off at the Hauptbahnhof, which is right in the middle of town. What could be easier? 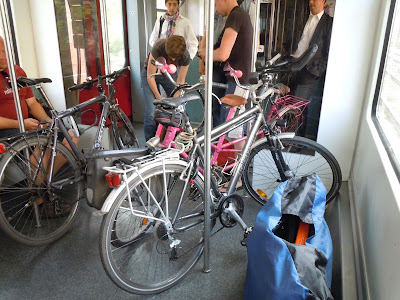 Breakfast at a German hotel looks like lunch, with meat and cheese, tomatoes and cucumbers, sometimes smoked salmon or trout, sliced paper-thin and arranged with artistic perfection on the platter. Great bread and rolls, and I don’t mean Wonder Bread or doughnuts. If your hotel doesn’t include breakfast, you can go to the supermarket and choose from the twenty or thirty kinds of sausage and cold cuts in the deli case.

Six-dollar gasoline – combined with public transportation, it makes people far more responsible about energy use. Yes, you still see BMWs going 110 mph on the autobahn, but you also see small cars, small trucks, and people making their way on foot, bike or bus. 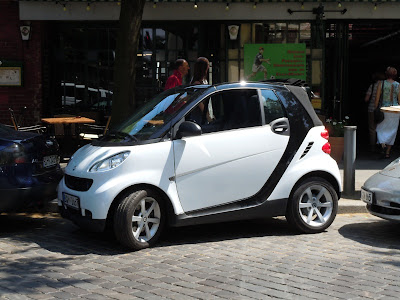 The car for those who don't like to parallel park (note absence of driver; it's already parked, not backing in)


A Tourist Information office in practically every town, to give you maps and brochures, of course, but also to book you a hotel room. 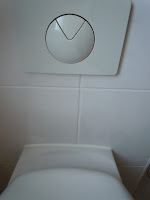 Dual flush toilets – the big button gives you a big flush, the little button gives you a little one.  And telephone showers, now that the technology has improved.  On previous visits to Europe I remember these less than fondly; there was never enough water pressure to rinse your hair, but enough to make the shower head twist in its holder and spray against the wall, not against your body.  But something has changed and now they're pretty fine; also great for washing your shirts in the bathtub. 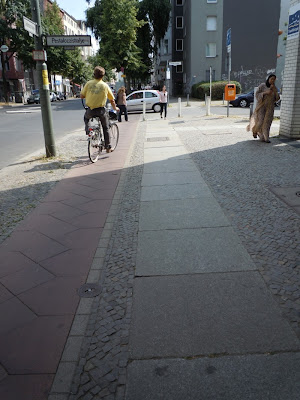 Bikes in the red lane; pedestrians avoid it lest they get run over. 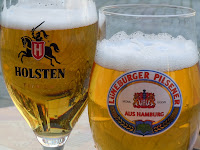 German beer – there are over 1200 breweries in the country, and the Purity Law of 1641 strictly regulates the quality. Usually tap beer comes in a labeled glass, thus enabling scholarly documentation of one’s drinking adventures. 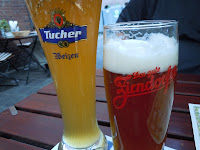 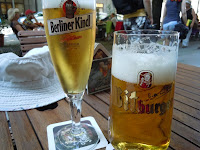 Really old buildings everywhere, and not just those protected by a historic preservation law. People continue to use old structures, modernizing them as needed, rather than tearing down perfectly sound buildings to build newer, bigger, more ostentatious ones.

Language capability – many Europeans start their second language in grade school and it’s not uncommon for people to speak three or more languages at least at survival level. Since English is usually the first one added, life is easier for American tourists. But more important, having more languages makes people far more empowered, more cosmopolitan, more knowledgeable about other countries and cultures, more suited to live in a global society.

Posted by Kathleen Loomis at 5:15 PM