Daily art -- sewing the embroidery together


I wrote earlier about how a couple of past daily art projects are languishing in bags, never having been put on display (and probably never going to be).  Here's one that got a bit farther.

In 2012 I did hand-stitching every day (you can see all the squares here).  I decided to sew them together seven squares across to resemble a calendar. I made four panels, three months each.  It's a good thing I got started on that task early in February, because sewing the squares together turned out to be nearly as time-consuming as making them in the first place, and it was nice to stay up to date.

One thing that was satisfying about 2012 was the way the calendar fell -- about as perfect as you can get if you want to assemble neat three-month panels.  To begin with, the year started on a Sunday, so panel 1 would have a full row of seven squares across the top. 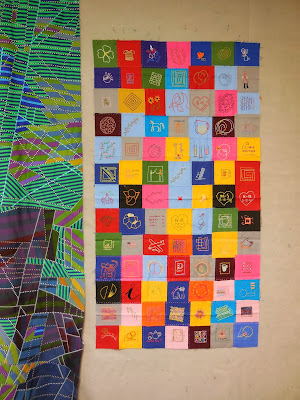 Then, because it was Leap Year, both the the first and second quarters had 91 days, exactly thirteen weeks.  That meant both panel 1 and panel 2 were perfect rectangles, with the beginning Sunday at the top left corner and the final Saturday at the bottom right.  And panel 3 also started on Sunday with a full row across the top.

By the end of September, however, the pattern broke just a bit -- the third quarter had 92 days, lapping over into Sunday.  So panel 3 had one orphan square in the bottom row, and panel 4 had to start on Monday, with a gap on Sunday (I used a square of tulle to hold the place).  I was pleased that the irregularity didn't show up until the third and fourth panels, so viewers would be surprised.

I still haven't decided how to display the panels, if I ever have a chance to do so.  It might be nice to hang them out from the wall so the back side is visible too.  I like the back side of hand stitching because it proves that the work was done by a human, not a machine.  I like the knots and the occasional tangle.  I like to see which stitches take up a lot of thread on the back, and which ones barely any.

Should that opportunity ever arise, I might sew a tiny tube of tulle across the top of each panel, just wide enough to put a very thin dowel or rod through, and suspend it from the ceiling on fishing line.  Or if the venue insists on hanging it on the wall, I might just ask for it to be casually pinned up without a hanging rod.  But I'm getting way ahead of myself!  For now, I'll probably hang a panel or two in my studio every now and then if a design wall happens to be empty.