The old-but-new quilt -- finished at last!


Many, many, many years ago I made 35 log cabin blocks for a quilt that never got put together.  I'm not sure when this happened but I think it was after the Bicentennial, because there are some red-white-and-blue fabrics in there that look suspiciously commemorative.  The blocks have sat in boxes for decades waiting for something to happen, and finally they called my bluff.

I started my first quilt when I was still in high school, a long time ago.  It was before anybody else did that sort of thing, and there were no books or workshops to teach the basics.  That didn't stop me, since I knew how to sew (garments) and figured how hard could it be to sew a quilt.  In fact, much easier than sewing a blouse, because the quilt just had to lie flat rather than fit a body.

The combination of supreme confidence and technical ignorance can turn out good in some ways and bad in others.  But if you ever do achieve technical proficiency, it can be really embarrassing to look back at your early efforts and realize how pathetic they were.  If a quilt has been sewed together and quilted you at least are spared the knowledge of how the blocks were cut and the seam allowances pressed, but if you return to a work in progress every dumb thing you did is still there on display.

In fact, this quilt could be a how-not-to-do-it tutorial all by itself.  I foundation-pieced the blocks instead of just sewing the logs together, and was sloppy about it, so some of the seam allowances were dangerously narrow.  But not the ones between blocks, some of which were an inch wide.  And not the ones that left visible dark lines because the bottom darker fabric was wider than the light fabric that was supposed to cover it (as in the pink checked log). 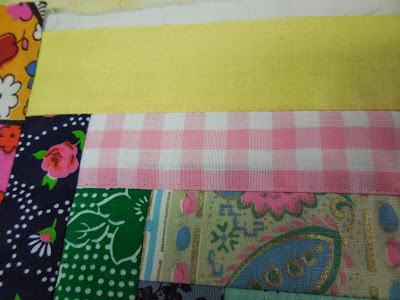 Then there was the color choice.  This was the most embarrassing part of all, because I've always prided myself on color sense.  Apparently that pride was misplaced.  The quilt was supposed to be a Straight Furrows design with dark and light rows, but my "lights" included a lot of mediums, and since I used a lot of big prints there were "holes" of light color in the dark pieces, and vice versa.  I had violated my (now) rule of not mixing solids and prints, except in very deliberate special cases.

If you stand on the other side of the room you can see the dark/light pattern, and it's pleasant, but from up close it becomes a jumble of colors, scales and patterns. 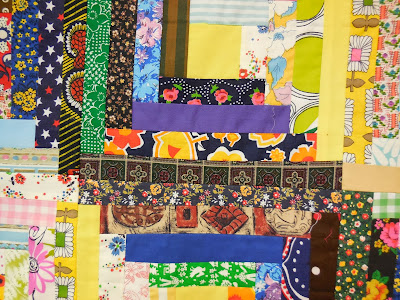 And -- what was I thinking? -- I had decided to quilt-as-you-go, and had actually made three quilt sandwiches of partial rows.  With very puffy polyester batting.  So when I decided to finish the damn thing once and for all, my first task was to take out a lot of quilting (fortunately it wasn't very good, so no aesthetic pain).  Ripping out quilting is a lot harder with puffy batting than with flat, because it's hard to get your seam ripper in there without stabbing holes in your backing. 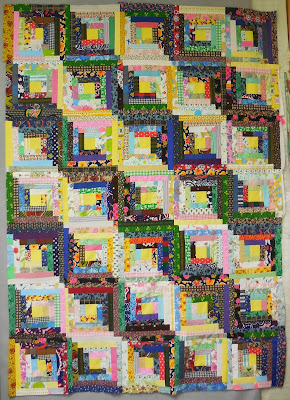 But wonder of wonders, there were exactly enough blocks to make a rectangle, and I have sewed them all together.  They are finally a quilt top, even if not the prettiest quilt top in history.  What a pleasant way to close out the old year, with a project that long in progress finally complete.

(I have to say that from across the room, the dark/light Straight Furrows design looks pretty good. If I made another one, except this time with better color choices and more contrast, I bet it would be fabulous....)

(Somebody bop me on the head when you hear me talking this way.)

Update:  linking to Nina-Marie's blog, where you can check out what other fiber artists have been up to this week.   And for those who visit from Nina-Marie, this is only chapter 1 in the story of old-but-new quilts -- keep reading upwards for more!