I've been writing about the mending project at Kentucky Museum of Art + Craft, and promised to keep you posted about my ambivalent feelings.  On the one hand, I am delighted with the concept that mending can be art, and intrigued by being able to participate in a Work Of Art by an honest-to-pete Famous Artist.  On the other, I am disappointed that the project has never really gotten off the ground, and have my own suspicions about why it hasn't (in a nutshell, poor planning plus poor execution).

I've worked two shifts since almost a month off for various travels, and when I returned there weren't all that many more garments on the pile than when I left.  Remember, the project has been going since the last week in April! 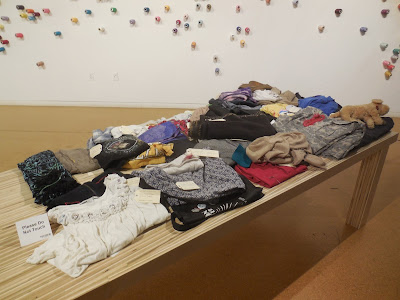 One day I kept busy by sewing flowers onto the hems of girls' dresses, which is always fun because they are so easily impressed.  With one little girl we talked about how old you have to be to learn to sew (I told her I learned hand-stitching when I was about five, and sewing machine when I was seven) and she allowed that maybe she would try to do it when she got old enough.

The second day I was working during a poetry slam held in the downstairs gallery.  The museum representative spoke briefly to invite people to check out the art show while they were there, and specifically mentioned the mending.  At intermission, one young woman bounded up the stairs and plonked down in the chair, taking off her much-worn flannel shirt as she approached.  She explained that she had lost both wrist buttons some time ago and had sewed the cuffs shut, but hadn't done a very good job of it and could I re-fix them.

So during the second half of the event, I mended her cuffs while listening to poetry from below. 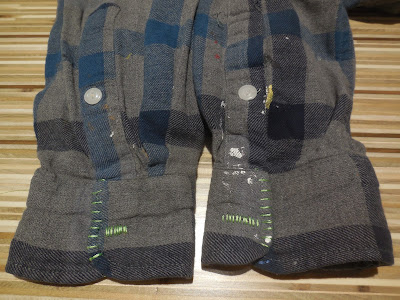