Because it feels so good when I stop...


It's Quilt National entry time again.  Already I've had four friends call or email for advice and/or commiseration -- not about their quilts but about the entry.  So I planned my afternoon around the process.  I am no newcomer to online entries so I do the regular preparation.  I get all the images properly sized and named and in a separate folder on my computer.  I find the list of things the system is going to ask for and type them out in a Word document so I can copy instead of type into the actual form.  I get my credit card.  This should not be such a big deal.

Well, I'll spare you most of the gory details and just give the highlights.  I realize that I've written pretty much the same damn rant twice before, after entering QN '13 and QN '15.  The same dumb features of the entry form, the same dumb password woes (yes, Virginia, you should start entering before lunch, because you know for sure that you have forgotten the password you gave two years ago and will have to wait for them to send you a new one which takes about a meal's worth of time to show up).  The same dumb system where you do entry #1, proceed through credit card checkout, and then return to do entries #2 and #3.

They have fixed a couple of things.  Now you don't have to type in the info like "Have you exhibited in any previous Quilt National?" three times; you can click here and everything you typed in for the first entry will be copied into the new form.  You still do have to type in the materials and techniques twice for each quilt, once on the full view page and once on the detail page.  And they still ask you for the month of completion, which I suspect 75% of people will make up rather than try to reconstruct from their work logs.

Something new: "Brief History of Exhibition and Publication.  Please indicate any public exposure for your work as an artist.  This includes shows and exhibitions as well as publications."  I think they allowed 500 characters in the little box, so yes, they do mean brief.  What are you supposed to put there?  I was passive/aggressively brief, told them a couple of big shows and then said "numerous shows and publications."  I wonder what they are going to do with this info. 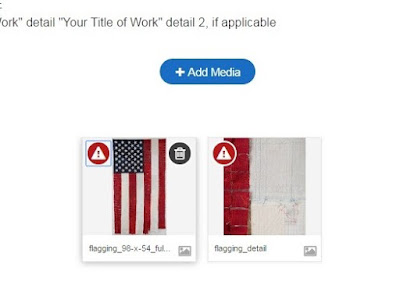 don't you love it when the death icon shows up with no clue as to why the system is unhappy?  it only took me three or four minutes to figure out what it wanted

I had two klong moments, one where things came out right by accident, one where they didn't but I hope it won't be fatal.  First the good news: I didn't realize until after I had hit the submit button for entry #1 that they had never asked for my name on the entry form!  Of course they did on the credit card page, but there they wanted the name on the credit card.  As it turns out, the name on my credit card is the name I want my work exhibited under, but I bet that isn't the case for many people.  I'm sure you could get this kind of thing straightened out eventually before the catalog gets published, but why don't they ask for your name to begin with?

Now the (maybe) bad news: You upload your image, which is pre-named something like "fading_59-x-99_full" and when you come to the page where you're supposed to fill in info about the quilt, the name of the image pops up automatically in the "Title" box.  I stupidly went on to the second box and proceeded down the page, without erasing "fading_59-x-99_full" and typing in "Fading".  I realized my error only after I had submitted entry #1 and proceeded to #2, at which point it was too late to go back and fix #1.

Yes, I was stupid.  But yes, the entry system was stupid too -- why did it choose to autofill that box, knowing it was going to come up wrong, instead of just leaving it blank for me to fill in correctly?  I hope that if this quilt gets into the show somebody will notice that "fading_59-x-99_full" isn't your typical quilt title, and call me up for clarification, but again, why not set up a process that avoids such problems?

I'm not the dullest needle in the pincushion, and if I have so many frustrations I bet a lot of other people do too.  I say it every time, and I'll say it again -- why don't show organizers have somebody sit down and pretend to fill out the entry form before they open for business?  And then why don't they fix some of these glitches and stupidities?  Wouldn't it be nice if your customers would be able to write blog posts about how easily they did their online entry?