Readers of a certain age may recall Abbie Hoffman, the 1960s counterculture and antiwar provocateur who wrote a book titled "Steal This Book."  I am going to steal his title and encourage all of you to steal this book idea.

Last week I wrote about a little book that I made from selectively reading the newspaper for two weeks, clipping all the words "early," "late," "earlier," "later," "earliest" and "latest."  Then I arranged them into lists and theme groupings, some of which started to feel like poems.  Several people left comments that they were intrigued by this approach, and one even said "I am fighting hard against the idea of stealing this idea."

Well, I'm here to tell you STEAL IT!!  I think this concept, which I'm going to call "newspaper poetry," is a neat idea and I would love it if other people would take it up too.  This is not the first newspaper poetry project I've done.  In past years I did several collections of haiku clipped from the newspaper (read about all my found poetry projects here). 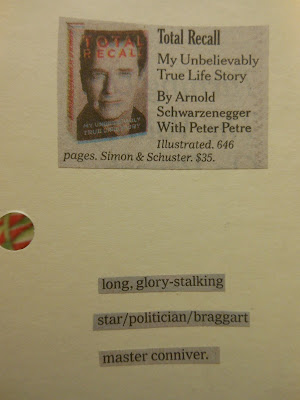 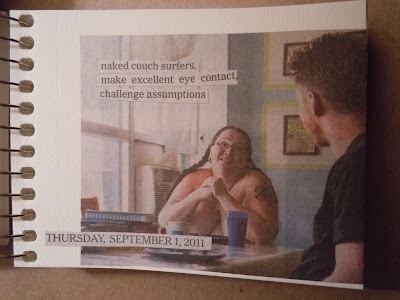 I'm no stranger to reading the paper with a scissors at hand.  I've learned several practical things, such as keep a scissors right there, put your clippings immediately into a little envelope, and wait till after your husband has read it before you start cutting.  I've also learned that your subconscious mind starts arranging the bits into coherent piles long before you actually get around to pasting up the book. 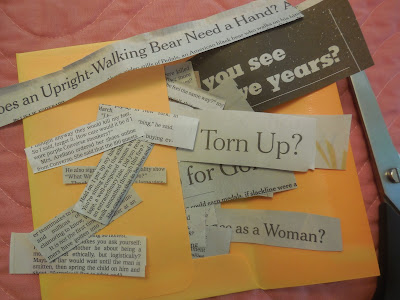 I love this artistic approach so much that I've already started clipping for two more books.  One is about questions (and after a couple of days I'm already amazed at how many times questions appear in the headline, not just in the story) and the other is about explanations of how to pronounce something.

I'd like to put out a challenge to any readers who like text, and like making little books, or even to those who like only one of the two.  Find a theme, and make a little book!  Then send me a picture and I'll show it to everybody.

If you can't think of a theme, here are some that might strike your fancy or lead you to your own idea:

- the words "cat" and "dog" (or any animal at all)
- the words "better" and "worse" (or any other set of opposites)
- the words "bride" and "groom"
- the names of colors
- spelled-out numbers (this will  be easy up to "ten" but more challenging beyond that)
- pictures of animals, if the captions mention them (cut out the captions too)
- pictures and/or references to babies
- really stupid remarks (that wouldn't be hard in my local newspaper...)
- people with your own name or the names of your family members
- words that rhyme

Just cut out clippings for a week or so and see how it's going.  Worry about making the little book later.  Have fun!