You probably have had one of these yourself -- an item that has been on your to-do list for so long that it's easy to forget, but when you do remember you are awash in shame for having let it slip so badly.  My hall of shame includes a bunch of baby quilts, the oldest one owed since February of 2013.

There's a back story: 55 years ago I met my dear friend Zuki in graduate school -- but actually it all started decades before that when her grandmother was in a sewing circle in Hawaii.  Somebody in the sewing circle had access to scraps from a factory that made aloha shirts and muu-muus, a bright and beautiful array of tropical prints.  Zuki's grandmother sewed the scraps into hundreds of quilt blocks, some 8 inches across and some 10 inches but all the same pattern, and eventually those blocks, never assembled into quilts, fell into Zuki's possession.  She, an accomplished sewist herself but not that interested in quilting, gave them to me on condition that I make a twin bed quilt to give to her nephew, and I could do what I wanted with the rest. 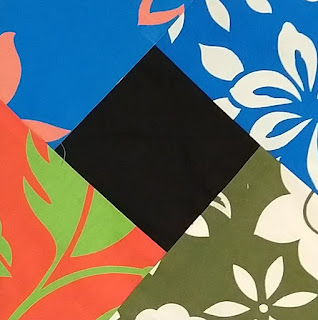 I did that, maybe 25 years ago, and stashed the rest of the blocks away.  Then 13 years ago Zuki's first grandchild was on the way and I was invited to the baby shower.  I pulled out the stash and made a baby quilt, which was such a hit that I did the same thing for the next five grandchildren.  I did the last four in a marathon in 2013, discovering that it's easier and faster to make four quilts at once than to do them separately.

But since 2013 there have been five more grandchildren, and I haven't done a single quilt.  Finally two weeks ago I decided the time had come.

To my surprise, there were still an awful lot of quilt blocks left in the stash, although I had cherry-picked the best ones long ago.  I managed to put together one set of blocks straight from the box. 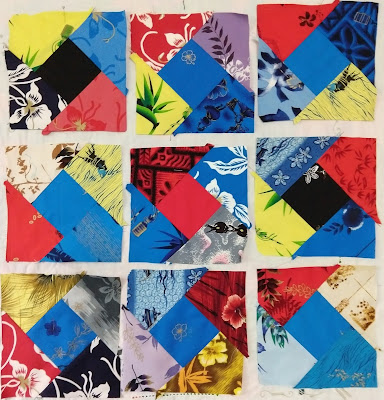 But the rest of the leftovers had some problems.  All the center squares are solid colors, which apparently were not in vogue at the shirt factory; some of centers were of different fabrics, too flimsy or too ravelly.  One of the patterns that was used over and over came in several different colorways, including brown, which I didn't think was appropriate for baby quilts.  So I ended up taking about 30 blocks apart, keeping most of the edge pieces, putting the brown pieces and the centers into the scrap pile.

Mostly this was easy, if tedious, although I did mutter and cuss when I got to the occasional block that had been sewed at 100 stitches to the inch and was really hard to rip out. 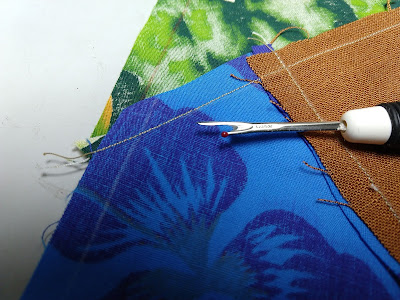 I had enough edge pieces to make 24 new blocks, and grouped them into two sets: one with all the pinks for a girl, one predominantly in blue for her brother.  Although I have made it a point of pride to make all these baby quilts from the original collection, I have allowed myself to add the occasional solid color or stripe of new fabric as needed.  Here I used new fabric for the solid centers -- yellow for the girl, blue for the boy -- and remade all the blocks. 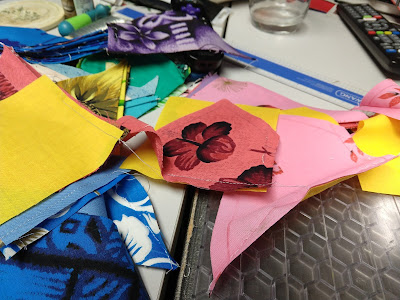