I know many of you, like I, have been bereft since the New York Times pulled the plug on its weekly Designer D.I.Y. feature.  Without it, how could we get ideas for how to produce sloppy, ramshackle low-tech craft items to adorn our bodies and homes?  If so, you will be happy to learn that D.I.Y is back in this week's issue, and it's every bit up to its previous standards.

This week's designer is Batsheva Hay, known for her "post-male-gaze prairie dress, an aesthetic that could perhaps be best described as ironic Amish."  I'm not sure what that means, but here's an example: 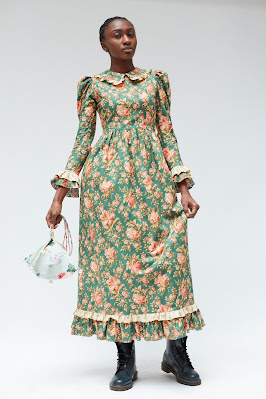 You will note that this dress is not one you would whip out on the sewing machine in a half hour.  It appears to be carefully made with standard garment-sewing techniques, which you would probably expect from a $400 outfit.  Hold that thought while we go to this week's project.

You're going to make yourself a dress out of your stash of "vintage Laura Ashley and Ralph Lauren pillowcases."  Batsheva explains that as a kid, she was showed by mom how to cut up old pillowcases that got holes in them.

(I will pause for a minute to ask you how many pillowcases you have ever owned that got holes in them.  Sheets, yes, at the pressure points of toes and hands-grasping-below-the-chin, but pillowcases?  Perhaps her household was different.)

So assuming you have an old pillowcase lying around, you can turn it into a top.  It's easy -- and needle and thread are optional! 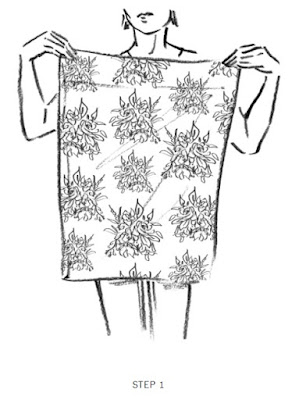 First make sure your pillowcase is wide enough to go around your torso.  I would recommend a tape measure, not a mirror.  I say this after more than one garment that looked like it fit in the store but didn't.  If it isn't big enough, get a second pillowcase, slice them both open on a side seam and sew them together "to your desired fit." 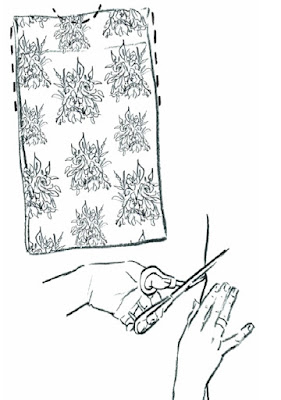 Now spread the case out on the table and "with the scissors, cut a neckline at the center of the closed end that's large enough to fit your head through.  Cut lines at the top of the left and right sides of the pillowcase large enough for your arms."

The second drawing shows how to hold a scissors, which may be helpful for some readers.

If you didn't do any of the above, good news, "The top is basically finished."  But wait, if you want you can "sew the neck and arm holes neatly with a needle and thread or leave them raw, because that looks good, too."  Not sure exactly what you're doing when sewing the holes neatly -- overcasting? hemming? embroidering? but I'm sure people will figure out something.  (At least one person will probably sew the holes shut and then wonder why she can't put the top on.)

Hey, you can also add embellishments like buttons or trim!

If that hasn't fulfilled your fashion wishes, Batsheva has another good idea -- add a skirt.  You can take another pillowcase, slit open the entire top end, step into it and pull it "up to where you would like it to rest, near your waist."  The designer, we're told parenthetically, "likes the skirt positioned a bit askew."  I think her wish will be amply fulfilled by the readers who get this far.

"Using several safety pins, attach the two pillowcases together at the waist, adding a safety pin every inch or so, pinning all the way around."

Do you worry that perhaps this "dress" will develop a few more holes the first time you try to sit down?  Especially since the safety pins aren't even positioned horizontally to get two pierces of the fabric instead of one?

Or perhaps you worry that if you wear this dress in public you will look like a 1930s urchin straight out of a cabin up the holler?

The gauzy watercolor illustration of the dress looks pretty classy.  I suspect the actual dress, not so much.
Personally, I'd rather keep those vintage pillowcases as pillowcases, especially since you'll never be able to buy such good quality linens again at ten times what you paid for them back in the day.
Posted by Kathleen Loomis at 5:27 AM