The dark side of juried shows

Policing up my office today I came across a box of CDs on which people had submitted entries last year for a juried show that I was organizing. I reflected again on the collateral damage involved in digital jurying – namely the quantity of CDs and packing materials that are used once and discarded. 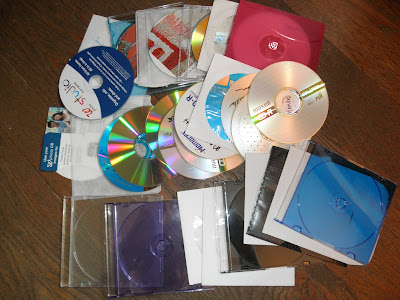 Theoretically digital images are so much simpler and efficient than slides. Any of us who have been entering shows for a decade still have drawers or boxes full of slides that will never be touched again, unless to make some found-object artwork that will reflect the distant past with pathos. Digital, by contrast, is stored once on your computer, instantly available to crop, label and send off to Ulan Bator for jurying.

Except that’s not how it works. You have to burn a CD, using way less than 1% of the capacity of the disk, package it in some kind of plastic or cardboard protector and go to the post office to send it off by snail mail. Many shows still tell you to enclose a self-addressed stamped envelope to get your CD back, except who in their right mind wants their CD back, since it’s useless for any other purpose? Even if you buy re-recordable CDs, is it worth the buck and a half or so in postage to get it back and reuse it?

The art show jurying world is going through radical change in this new age of digital media; giving up slides was a painful process and it’s clear that we’re still in transition. I give points to shows like Art Quilt Elements  and Form, Not Function that allow entrants to submit their images online rather than on CDs. Even though these submissions can require many minutes of uploading, they’re far less hassle than the CD/mail approach. And of course they don’t eat up any tangible resources unless you want to send a check rather than paying electronically.

So I sorted through my pile of old entries and salvaged the plastic protectors; at least those are easily reusable. I hate the idea of simply trashing the CDs. I see so many of them discarded on the road when I walk and wonder what future archaeologists are going to think about finding zillions of still-shiny rings in the middens of 21st century civilization.

In Greece I saw CDs hanging from posts in fields, turning in the breeze, as shiny scarecrows. What a good idea! And yet I don’t think there are enough fields on the planet to use up all the CDs we burn, read once and discard. My artistic focus these days does not include creative re-use of old CDs, but if it did I would not suffer for raw materials.

Posted by Kathleen Loomis at 5:02 PM