My new camera, an Olympus Stylus 7030, lasted five days out of the box before it developed a fatal flaw. Seems that the little door that opens up to let you plug in the USB cable fell off and disappeared. Unfortunately, only half the door disappeared – the half that lets you get your fingernail under to pop it open. The half of the door that remains tightly shut protecting the cable interface is still there. 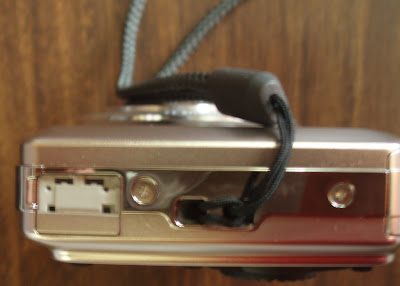 Note lack of little door over the off-white plastic area on the left.  I suppose you could try opening the inner plastic door with needlenose tweezers, but that would be no fun.

If you can't get to the cable interface, you can’t access your pictures, nor can you recharge your battery. (Minor obstacles.)

I took it back to the camera store (again, it pays to buy locally) and the clerk said she had another one of that same model lose its little door while she was standing at the counter selling it. We agreed this was a serious design flaw. My first thought was to upgrade to another Olympus with a better little door, bigger display screen, twice as much internal memory and 7X zoom instead of 5X.

I had to come back the next day with the box, all the cables, the battery charger, etc. By then I had talked with a friend and contemplated whether I really wanted to stick with Olympus. I have owned four Olympi (one film, three digital) and I do feel a certain fondness for the brand. I am comfortable with the way it organizes its options and controls and I want to spend as little time as possible learning new systems.

HOWEVER, I have sort of learned how to use the computer program that comes with the camera, and while I can see how some features might come in useful, I hate most of how it operates. It won’t let me resize my pictures to 800 pixels wide for easy loading to the blog. It makes me click through an elaborate menu of stuff I don’t want to do every time I transfer images from the camera to the computer – for example, the first thing that comes up is a map of the world so you can tag your pictures geographically.  And its cool white-type-on-black layout is unreadable for me.

So yesterday I had a heart-to-heart with Kim, the best photo store clerk I’ve ever met, and we decided that I should abandon Olympus and get a Nikon. She told me to take all the photos off my new memory card, then pop it into the Nikon and reformat just to make sure no repressed Olympus memories came back to haunt me.

But wait! How could I take the photos off the memory card? My old Olympus uses a different kind of card, and the new Olympus wouldn’t let me download my photos before I brought it back, because of its broken door. Not to worry -- Kim gave me a card reader device for free! Another reason to patronize your local camera store instead of buying online.

So now I am the snakebit and wary owner of a Nikon Coolpix S6000, 14.2 megapixels, 7X zoom. The card reader worked – thanks, Kim! – but I still have a bunch of computer issues to work through, since my old Windows XP is too geriatric to support the Nikon software and I haven’t yet figured out how to edit the images.

In the olden days you bought a camera and went out and took pictures. Now you have to access a whole support system to make the camera work. Yes, I know I could give my soul to Google (or at least the part they don’t already have) and manage my pictures online, but I have a perhaps irrational desire to keep my images on my computer, not throw them into cyberspace and hope they don’t get into trouble. I’ll figure out something. Meanwhile I hope my new new camera behaves better and lasts longer than my old new camera. Keep your fingers crossed for me!
Posted by Kathleen Loomis at 8:00 AM