Martha Sielman's new book, "The Natural World," is getting lots of buzz among art quilt bloggers, since Lark Press has sent copies to many, many of us for review.  I opened the book without high expectations, as I think flowers, animals, landscapes, etc. have been overworked by quilt artists and are too often predictable and sappy.  But I was pleasantly impressed by the range and quality of work that Martha has found for this book.

Martha has chosen 19 artists for close focus, and included one or two quilts from 70 more.  In the longer sections she has allowed each person to discuss their background, inspiration and techniques in detail, which I loved.  Many people look at books, magazines and blogs just for the pictures, but I look for the words as well, and I thought the words in this book were especially well done.  Either the 19 featured artists are an exceptionally thoughtful and articulate bunch, or there has been some really skillful editing, probably both.

I was happy to find Ruth McDowell as one of the featured artists.  Because she avoids the art quilt show circuit I haven't seen her work in person or in catalogs, and because I haven't bought one of her books recently, I've missed out on what she's done in the last several years.  The answer: what she's always done, making striking quilts with a masterly use of commercial fabrics.  (And I suspect few of them come from current designer lines.)

Looking carefully at the range of techniques and treatments, I realize that no matter what the subject, I much prefer treatments in which the artist departs from photorealism.  (Other than the gee-whiz factor of how much the quilt resembles the photograph, I'm never sure what is accomplished artistically.)  Some of the quilts in the book go a long way toward abstraction; others are representational but in a painterly way.   In many cases relatively realistic subjects are seen over totally nonrealistic backgrounds, many of them referencing more traditional fabrics and quilt patterns.  I like this effect; it makes me feel confident that there was a reason to execute the picture in the quilt medium rather than as a painting or photo.

It's a hard call, but if pressed I would say my favorite pieces in the book are Ginny Smith's birds.  I first saw and loved these creatures at Quilt National in 2009, but hadn't realized how many other pieces she has made with the same cast of characters.  These are birds with personality. 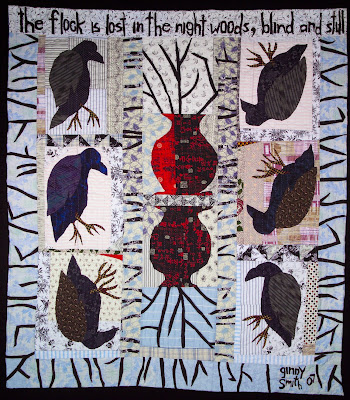 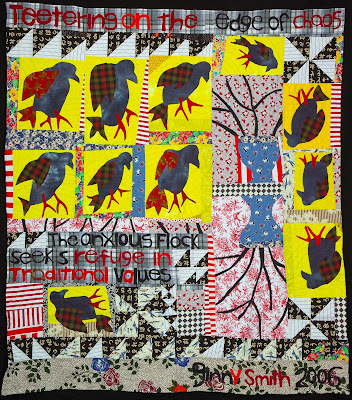 Posted by Kathleen Loomis at 6:43 AM