Isaac was visiting on Friday and wanted to sew.  When I said yes he dove underneath the sewing table and found the box to lift up the pedal, and got himself all ready to go.  After he had worked on a new collage for a while I realized -- the day after tomorrow was Valentine's Day!

So I found a piece of beautiful hand dyed red fabric sitting on the work table, and cut out two hearts.  Found a piece of hand dyed hemp that had never been put away since I worked on a project, and cut it down to work with the hearts.  Told Isaac that he could make something beautiful for his Mommy for Valentine's Day.  Then he found some sparkly gold sequin fabric on the sewing table (do you begin to see a theme here?  when you never clean your studio you don't have to look very hard for your raw materials).

I changed to red thread, which occasioned an explanation of how the sewing machine uses two threads and the second thread comes from the bobbin.  He was particularly excited at the intermediate step when we had red thread below and green thread on top. 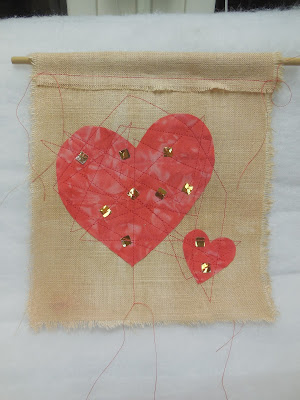 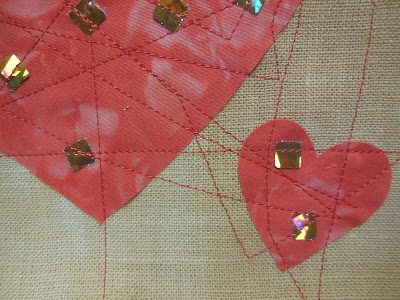 Last time we sewed, before Christmas, I sat next to him and supervised closely.  This time I worked around the studio unless he needed a gold square placed.  He's getting more independent, and as long as he stays scared of the needle and keeps his hands away, I don't think he can get into too much trouble left to his own devices.