Zipping through the aisles at Hobby Lobby the other day I was astonished to find this product on the shelf: 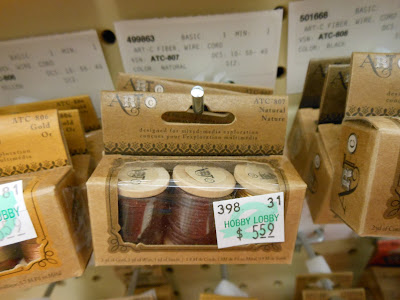 That's right, it's three tiny wood spools.  You can't see from the photo, but each one is wound with some kind of threadlike material, not actually thread but larger strands, some metallic, some that looked like plastic coated wire.

I didn't examine them closely enough to swear in court, but I'm sure the spools are new, made in China to resemble real spools.  This stuff is sold as "mixed media artist materials."

I am a wood spool aficionada and when I see my favorite things on display I perk up.  Back in the day when all thread came on wood spools, I was careless.  I threw them away when the thread ran out.  Or I would use them as craft bases, sometimes painting them, sometimes gluing yarn or paper to them.

Oh, I shudder to think of the spools that I disposed of or ruined.  I don't remember exactly when it dawned on me that wood spools were things of the past.  At some point thread started to come on plastic, and to my credit, fairly soon I realized I should be saving the wood spools.  I still owned many from my own stash, and I commandeered all I could from my mother, my sister and unsuspecting friends and relatives.

I'd grab them at grab bag.  I also started buying them at flea markets.  A decade ago, on a good day, you could get a bag of spools for a dime apiece, some empty, some with thread still on them.  Then the price crept up and up, out of my range.  Occasionally I'd score a batch from some back alley source.

For instance, once I was visiting a sewing circle at a church and the ladies showed me a big pile of stuff that they were going to sell at a bazaar the next week.  Including four shoeboxes of thread, some on wood spools -- you could tell it was very old because spools and thread alike were stained.  I tactfully pointed out that thread that old wasn't good to sew with, volunteered to separate the wood spools from the plastic, and had to force them to accept my money so I could take the wood spools home.

I bought two old thread display cases, which hold many but not all of my spools, and I enjoy arranging the spools by color and size.  You can almost imagine how the case looked in its first life. 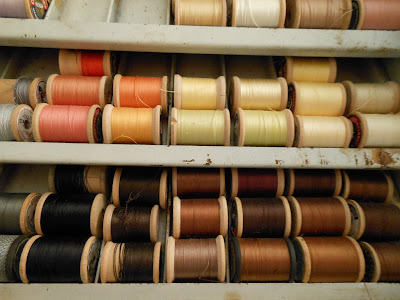 Bet you didn't know that the standard Lily spools are a hair shorter than Clark's; I didn't know either until I realized that I had to sort by brand to pack my cases. 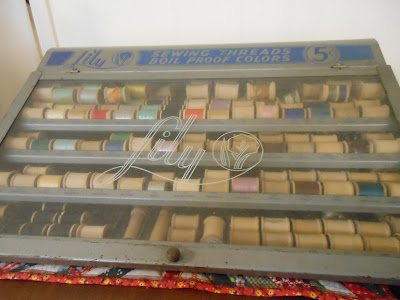 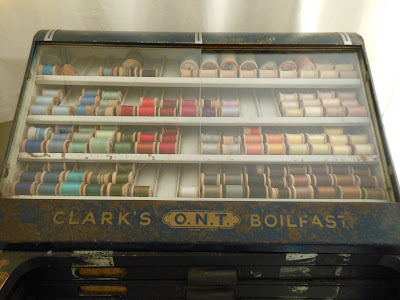 Many others go in old type cases; large spools are arrayed on top or on cords. 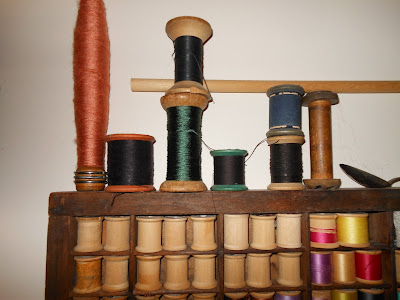 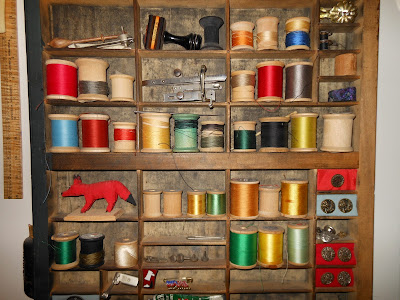 Considering that my price point for antique spools has been ten cents, I had sticker shock looking at the faux spools at Hobby Lobby, $1.86 apiece.  Of course that included a little bit of faux thread that had to be wound onto the spool by a slave laborer in China.

Of course the "artists" who buy this stuff probably wouldn't know the difference between a faux spool and a real one, but wouldn't it be nice to think that I could disassemble my collection, package the spools in little bags of three, and get two bucks apiece?