As I contemplated my 2011 package project, I started to think about what went into the packages.

Many of my packages were bundles of like objects -- a lot of broken pencils, a lot of strange metal objects, a lot of styrofoam packing forms, a lot of selvages.  These were the easiest bundles to make, because you wander about and notice a bunch of the same thing lying around, and what comes to mind but to put them together. 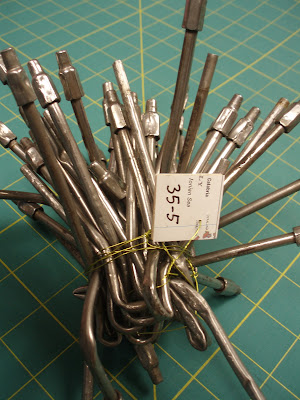 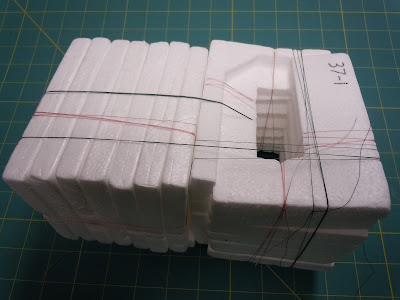 And to take a lofty critical look, repetition is one of the hallmarks of modern art.  It resonates with our modern mindset of mass production and abundance, and with the modernist sensibility that rejects hierarchy in favor of equality, or perhaps we should say interchangeability.

Often I made rather than found my identical things, cutting up a big piece of plastic or cardboard to make a set of bits that could be bundled together.  This was fun; I like to sit and make fussy little constructions out of a bazillion little pieces, as witness most of my quilts.  I enjoyed the decisions of how to cut and arrange the pieces as well as the actual binding or tying. 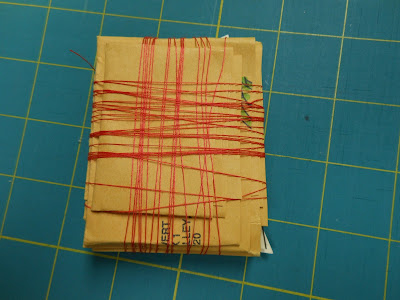 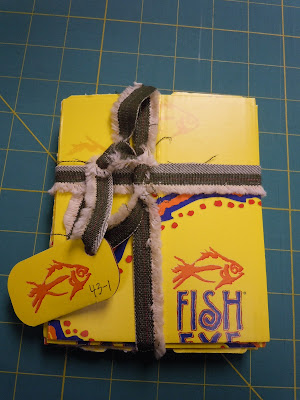 But I didn't always limit my packages to identicals.  Often there would be two sets of objects put together: some metal surrounding some cardboard, or some plastic surrounded by cocktail picks.  The two sets would usually seem to go together because of size: just enough cardboard to fill up the space between the metal brackets, the plastic folded to be the same length as the picks.  I found that matchmaking was a lot of the fun of making these bundles. 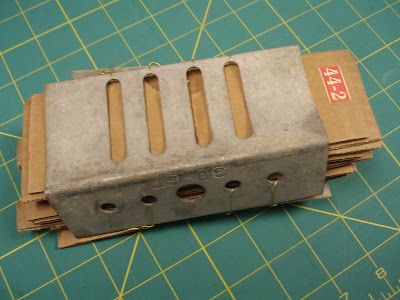 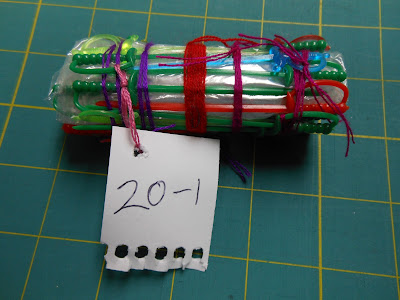 Toward the end of the year I put a shoebox on my worktable called "bits for bundles."  When I came upon a little something I would toss it into the box, and eventually the box started to yield collections.  It was like a freshman mixer: guys who arrived forlorn and alone would find friends as time went by.  As a result, I occasionally made a bundle of totally disparate objects that seemed to want to be together.

Maybe this was my favorite bundle of the year:  the beautiful green top of a silicon spatula that divorced from its handle, a piece of a venetian blind slat, some strange screws and bolts, including one in blue.  It's tiny but everything seems to work together.  Hey, just like art! 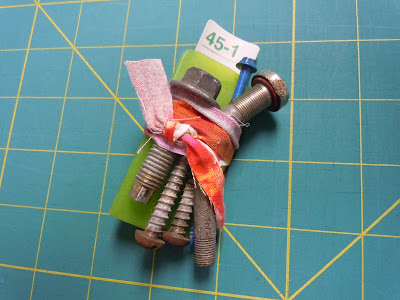