It's always great when somebody out there not only reads your blog, but grabs an idea and does something lovely with it.  This time it was Jennifer Allen, who wrote me:

"I fell onto your blog while searching for ideas about working in series and I'm glad I fell.  I've been looking for a way to find some focus, to narrow parameters, to slow down and explore... just be more thoughtful in what I'm doing.  Here's a pic. 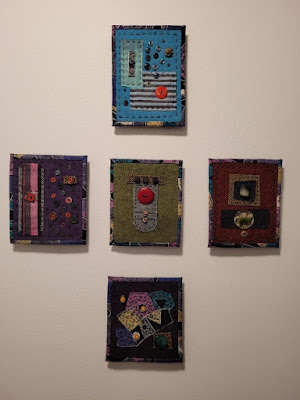 "Parameters: limited to the 5 wool swatches I had on hand for size (about 8 x 6) with no trimming allowed, each to use buttons already on hand (and long forgotten), some hand stitching (however primitive) on each one and other sources of fabric being one old hat, one old dress, and two remnants all on hand.
"I'm so pleased with the Button Box series that I've hung them.  Very satisfying.  I'm looking for my next 'series' and thinking in place of buttons, button holes might be interesting.
"Narrower parameters and small size seem to be key for me to gain some focus; a step in a good direction.  Buttonholes are now lodged in my imagination and I'm enjoying just thinking about the idea.  Enjoying is pretty good too."
Jennifer, you're welcome!  I'm so glad you stumbled on advice that obviously you were ready for, and able to make good use of.  The old saying: when the student is ready, the teacher will appear.
Note to all:  Good for Jennifer to set rules that worked, and double good for her to plan her next series on the shoulders of the first one. 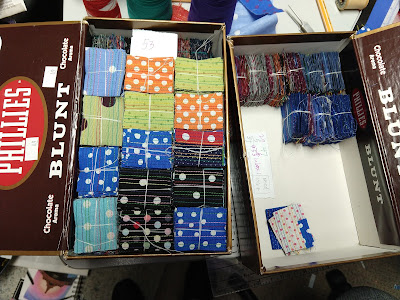 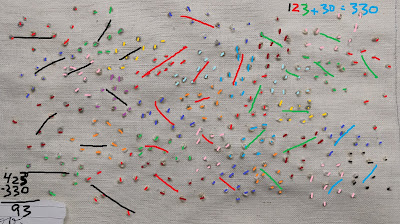 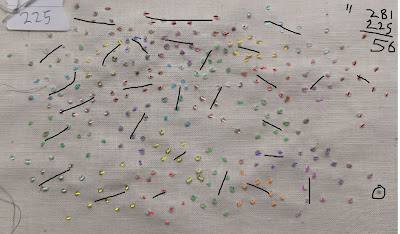 The impeachment trial has already proven to be a most conducive environment for hand stitching.  While watching yesterday I made a whole lot of french knots on my memorial bandage, so many that when I went to count them this morning I realize I'm almost done with the largest month in the project: 668 out of 754 needed for December.  The last 86 will require me to count as I stitch -- which will be fine until I get distracted and have to yell out at something outrageous said in the Senate.  I'll have to be careful! 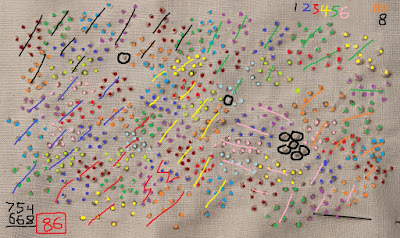 And now it's time to decide how I will separate the months on this "calendar" scroll.  Probably with a line of machine stitching?

Meanwhile, on to November, with "only" 423 deaths to mark.

Back to the pandemic memorial sewing

The last time I wrote about my coronavirus memorial quilt at the end of January, I had 23 bundles of 25 postage stamp-size little quilts, on the way to 2,662 pieces -- the number of deaths in Kentucky in 2020.  With a few days off to sew Valentine hearts, I've been making good progress and now have 53 bundles -- halfway there!!  (I decided it was less daunting, and simpler, to count bundles rather than pieces.  It seems way less difficult to make 106 bundles than to make 2,662 bits.) 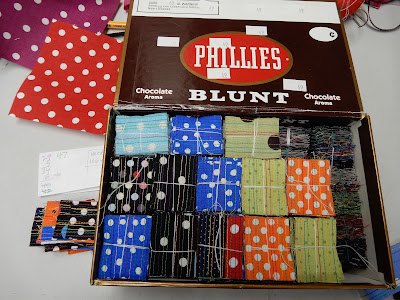 Meanwhile I decided that I needed a new hand stitching project, so I'm doing a second 2,662 memorial, this one in french knots sewed onto a vintage roll of six-inch wide bandage muslin. 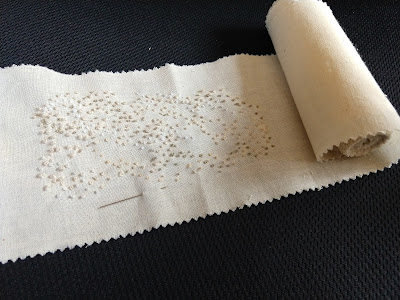 This piece is going to be organized by month, showing how the pandemic started slow, plateaued for most of the year, and then hit the fan in the post-Thanksgiving surge. 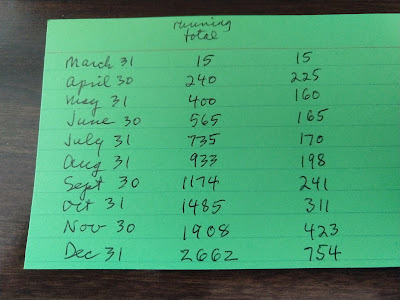 You know how I feel about planning -- the less the better.  I like to work out problems while stitching, not before.  I really have no idea how much space it's going to take to make 754 french knots, so I'm just sewing away.  Pretty soon I'm going to have to start counting, at least to estimate how many inches of bandage to give to December.  Then I'll work backward and allocate the same space to each of the other months.

I think what I'll do is take a photo and pop it into my Paint program, then mark off each knot that has been counted with a click of my paintbrush, ten knots per color.  Like this: 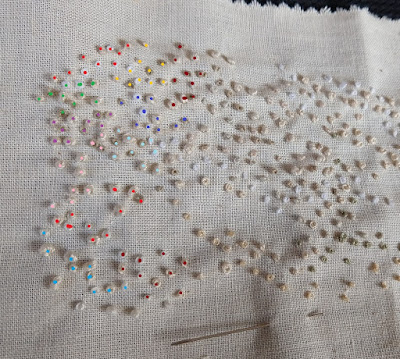 That's 110 knots counted, so I think I have about 500 made so far.  Looks like I can do 8 inches pehad enough for 12 inches per month, so I don't have to worry about running out of space!
Posted by Kathleen Loomis at 6:18 PM 1 comment:

I was looking through old blog posts last week and happened upon one published in a long-ago early February, suggesting that maybe we all needed to do something fun, frivolous and friendly.  I think this February we need that kind of activity maybe more than ever before.

My post, from 2010, showed how to make little Valentine hearts from tulle and whatever tiny scraps might be lurking about your sewing table.  I layered Solvy between two thicknesses of tulle, stuck scraps in the sandwich and machine stitched a whole lot to hold everything together.  After cutting hearts, I soaked the Solvy out. 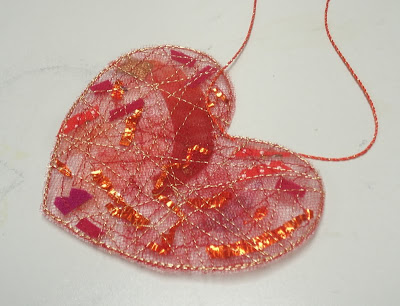 When I re-read the post, I wondered why I had bothered with the Solvy.  Surely I could make a tulle sandwich without that layer of cheese in the middle!  So this week I went back to the sewing machine to make a new batch of hearts.  Since I suspect those I sent out to my friends and family eleven years ago are missing in action.
I found several kinds of tulle in my stash, but chose a sparkly red one.  Inside the sandwich, several kinds of shiny threads and some snips of pink, red and gold sheers and silk.  In the sewing machine, red thread, some plain cotton/poly and some metallic. 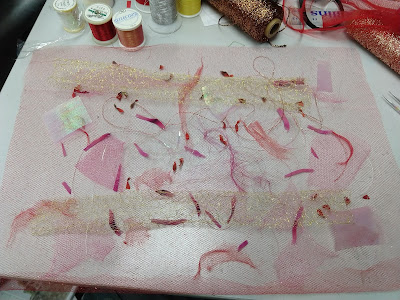 Then I stitched a lot.  When everything was sewed in place, I put on a darning foot and made free-hand hearts, going around each outline three or four times. 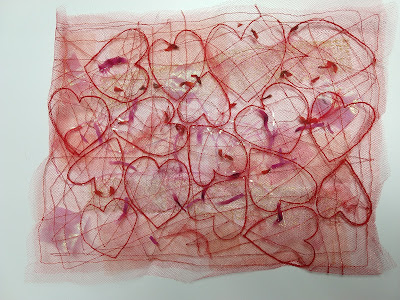 Cut them out, saving the extra bits for future use (hold that thought). 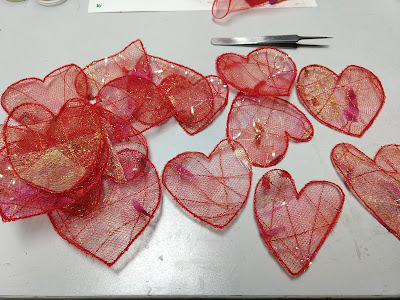 I can't exactly remember what that first batch of hearts felt like, but these seemed to be looser, lacking that stiff Solvy cheese in the middle.  So the stitching tended to pull tight against the tulle, and left bulges in the unstitched areas.
I wasn't sure I liked that effect, so I painted the hearts with matte medium, diluted a bit with water, and let them dry between two layers of plastic under a weight.  That flattened out the bulges, and gave the finished hearts a bit of stiffness, just like the old hearts, who got that way because you can never wash away all of the Solvy.

As I wrote in 2010, Valentine's Day is coming up, and for once I had the brilliant idea in time to actually make a little present and get it to my loved ones on schedule!  (That is, if the post office cooperates -- too bad I didn't come upon that old post six weeks ago.)
If you're intrigued by this little project, I urge you to read the old post first.  See which approach appeals to you -- the firmer Solvy sandwich, or the looser tulle-only approach.  Also note that the old plan calls for three layers of tulle, and the hearts I just made were only two layers.  As a result, they're airier and less substantial.  You might want to add a third layer, or even a fourth.  (And when I compare the new ones to the old photo, I realize that I did a lot less stitching this time, which helped the hearts be airy, insubstantial and bulgy.)
In the 2010 version, I drew the hearts with a marker before sewing the outlines, but this time I just eyeballed it.  I can't see much qualitative difference in the artistic effect, but I do remember that last time, the marker was coming off on my fingers and I wasn't happy.  So if you want to draw first, make sure to use a waterproof ink.
Play with it!  And then check out the 2010 post for a helpful hint on making the hanging cords.
PS -- as you sew, you may have the same experience that I did -- you think of more people who you could send little Valentines to.  So you may make a second sandwich (which I assure you will go faster than the first one).  When you do, use those leftover bits from cutting out the hearts as filling for your sandwich. 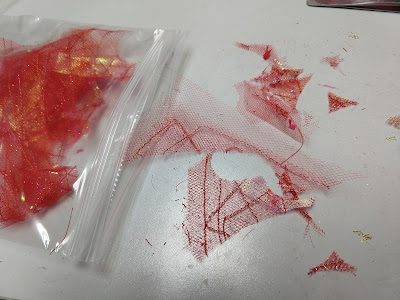 After I posted yesterday about the coronavirus memorial quilt, Cozygirl left a comment and asked: "Will you handstitch the piecing together or use a machine?"

Answer: machine all the way! 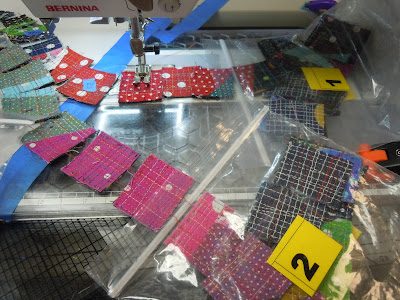 Several years ago I wrote a blog post about how I sew big postage stamp quilts together.  I still use the same method, and indeed the same little ziplock bags with numbers on them.  (On both sides, because you never know which side will be up at any given moment.) 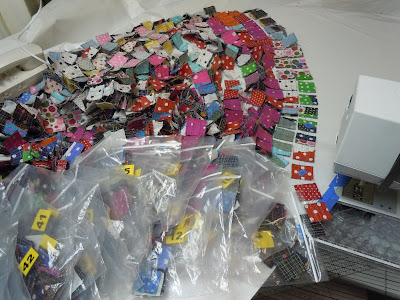 The quilt you see in these old photos is called "Epidemic" -- you can see the polka dots in it too, just like the new one.  I think some of the fabrics left over from that quilt will also show up in the one I'm making now.
Posted by Kathleen Loomis at 5:44 PM 2 comments: