Is this mending? I guess so...

If you define mending as fixing a dysfunctional garment with a needle and thread, then yes, this is mending.  The cardboard mask was the perfect complement to a superhero cape, except it was so poorly engineered that the only point of contact between mask and nose came way too far down, and the forehead didn't support the weight of the mask, and it HURT!!

So I found a piece of an old T shirt, and stuffed it with poly batting, and affixed it to the inside of the mask with stitching and a bit of glue, and all is well in the superworld. 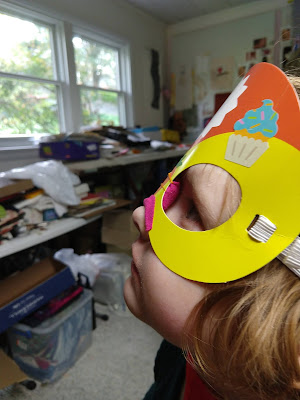 Afterwards, ice cream was served, which made the day perfect. 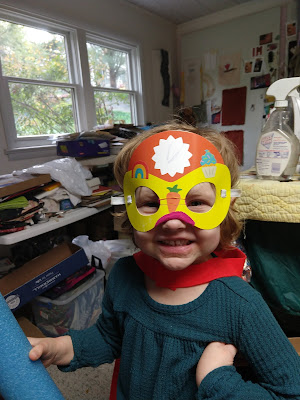 Imagine my surprise when I saw a recent article in Hyperallergic in my email, with this feature image: 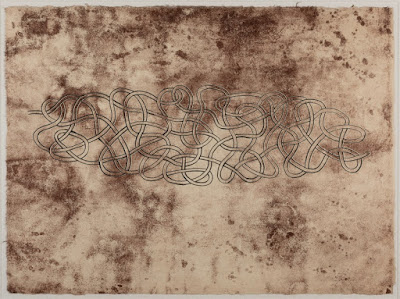 It's a lithograph by Anni Albers, whom I have always known as primarily a fiber artist.  And indeed, doesn't that mottled background remind you of any number of dye jobs you yourself have done in your fiber art career?  It looked  like some of my experiments with walnut ink. 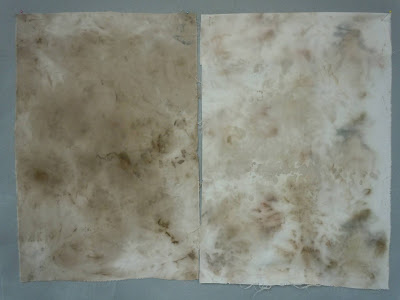 But what really struck me was the tangled-cord motif.  Which looked exactly like one of my favorite subjects from my year of daily drawing. 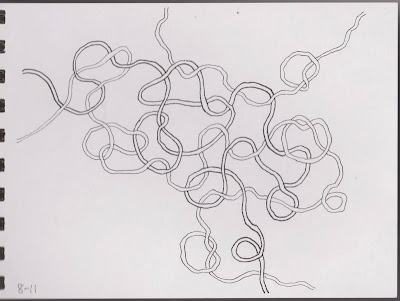 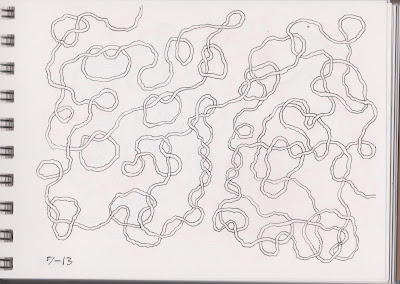 So I guess the only artistic difference between Anni Albers and me is that she had the good sense to combine her tangles with her mottles, and make lithographs.  And probably a couple of other things.

And that got me to thinking of another déjà vu moment when I saw my own reflection in a famous artist's work.  Coincidentally, that famous artist was none other than Anni's husband Josef Albers!

(If you're interested in Albers' printmaking, check out the online exhibit of the current show that Hyperallergic was talking about.  It also features prints by another artist who is primarily known for her fiber work, Ruth Asawa.)

Forced to Flee -- zooming this evening!

I wrote yesterday about how my 3-D "art quilt" is now traveling with the SAQA show about refugees, "Forced to Flee."  I will be one of five artists participating in a zoom webinar roundtable this evening at 7 pm eastern, discussing our work in the show.

The webinar is free and open to the public, but you do have to register first, at tinyurl.com/MUQuilts

Because of the time difference, it will be difficult for non-North American viewers to tune in, and only US artists were invited to participate in the roundtable discussion.  I thought this was too bad, especially since SAQA bills this as a "global exhibition" and many of the artists live outside the US.  So I asked my dear friend Uta Lenk, who lives in Germany and has a piece in the exhibit, if I could feature her in my own little non-zoom roundtable. 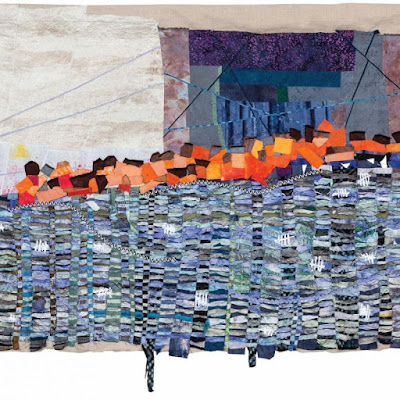 Uta Lenk, Everyone has the right (detail below)

Here's what she has to say about her quilt:

Over the years I have met and become friends with a number of refugees, many of them from Africa, who had come to Germany via different routes, but for many of them a rubber boat trip across the Mediterranean Sea had been part of their journey. Germany’s reaction towards the ‘refugee crisis’ has taken a decisive turn, the brief period of ‘welcome refugees’ in 2015 has turned into a Fortress European Union, trying to keep refugees out, violently (and illegally) pushing them back from Greek shores to Turkish shores.

I have always deeply felt the gap between the words of the Universal Declaration of Human Rights – to which the European Union likes to refer when it is reproaching other countries for not abiding by these rights – and the way the EU is treating people seeking a better life by leaving a home whose difficulties were often caused by interferences of European countries, be it long ago or today. I get the impression that European countries do not grant the same degree of Human Rights to people from any country. I used a newspaper photo of a refugee rubber boat on the Mediterranean as inspiration for this quilt. An abstracted boat with its passengers is enclosed by excerpts from the Declaration of Human Rights written in the background, on the sky. 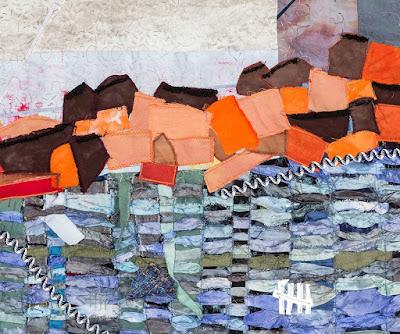 Thanks, Uta, for your guest appearance today.  Sorry you will probably be asleep during the zoom tonight!

Posted by Kathleen Loomis at 5:19 AM 6 comments:

Longtime readers may recall how four years ago I started making little figures from fabric that I called "daily people," and then when I saw a call for entries from Studio Art Quilt Associates I thought I needed to make some more.  The call was for a SAQA show called "Forced to Flee," about refugees -- at any time, from any place.

So I made a bunch of quilt refugee people, using scraps of old beat-up quilts as my raw material to make sure I would meet the SAQA definition of a quilt.  And the piece, "Tired and Poor," was accepted. 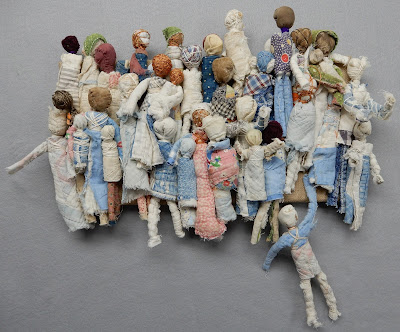 The show has been traveling since 2019, with a couple of dates last year canceled for pandemic. It's now on display at Misericordia University in Dallas PA and tomorrow I will be one of five artists participating in a zoom roundtable to discuss our work.  The webinar will be held at 7 pm eastern time on Tuesday.  If you'd like to tune in, you need to register in advance at tinyurl.com/MUQuilts.  I'd love to have some company! 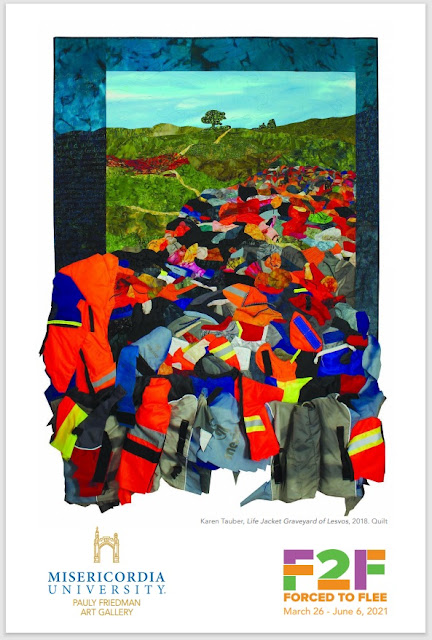 Posted by Kathleen Loomis at 4:57 AM No comments: 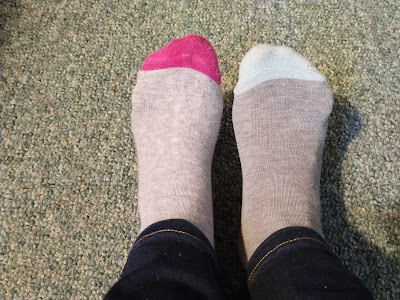 I've been dyeing Easter eggs with the now-ten-year-old for several years.  We missed last year, at the height of the first surge of coronavirus, and that also meant that the now-three-year-old missed her first chance to participate.  So it was especially good to be all together again, vaccinated and ventilated, this year. 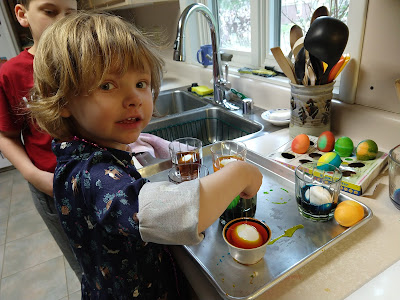 The plan this year was to immerse the eggs only partway in the dye, then in a subsequent bath, spin the egg so the colors overlap and blend in pretty ovals. 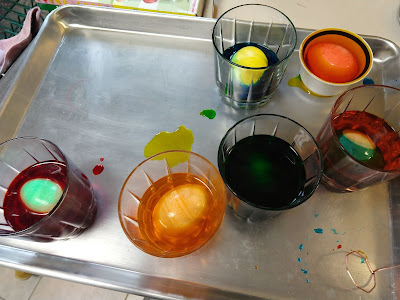 It worked out very well. 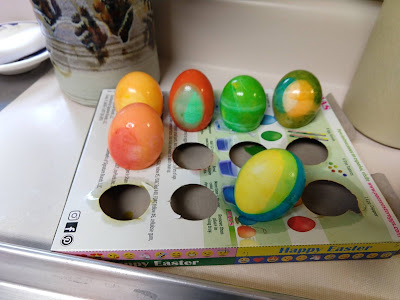 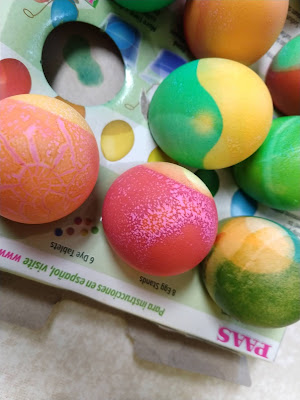 A few of the eggs even had special effects, for reasons that we couldn't figure out.  Maybe because the tablets were still fizzing when the egg went in?  And how about that yin/yang curve on the green-and-yellow egg?

A few years I bought two wood painting panels, 8 x 8 x 1.5 inches, and wanted to experiment with adding more paint to my collages.  I had always had a mental block about considering myself to be a "painter," but something changed.  So long ago that I forget what it was.

I started by pasting down some card-weight scraps of paper to make a textured surface.  Then I slathered blue, black and rust-red paint over the top of everything, making a point of not mixing the different colors too uniformly.  I had some scraps of map left over from cutting shapes for previous collages, so I pasted them on top.  I took the panels to my drawing/critique group and they were not amused.

The map scrap, which I adored, was too prominent, people said.  The other panel was a good background but nothing much was happening on top of it.  I took the panels home and reworked them.  I cut just the roads out of some maps and pasted them on top.  I grayed out the too-prominent map shape (which I still adored) with diluted black paint.  I did some other things that I have forgotten.  Now it was me who was not amused.

The panels sat around my studio reproaching me.  Shortly before pandemic lockdown I was asked to be part of a project in my textile and fiber arts group in which we each took some paper from a haul of antique piano rolls and were supposed to do something with it.  I left this task till the last minute and the night before the meeting I did some lame experimentation, cutting the paper, weaving it back together, writing on it with a calligraphic pen (the ink bled into the paper).  Realized this was lame, and that very afternoon, before the meeting, I grabbed one of the wood panels and collaged some piano roll paper over the top.

After I showed what I had done with the paper, the audience was not amused, especially since the other presenters had done far more imaginative things with their samples.  I took the panels home and put them back in their corner.

Then a month ago I decided it was time to stop playing around with these panels and actually finish them.  I had unearthed a bag of tiny collages that I had made a long time ago, and decided that one of them would go beautifully on the panel with the piano roll paper.  Then I made a little weaving from two vintage books, mounted it on some handmade paper that an art pal had given me, and put it on the panel with the map shape -- now further grayed down with a layer of cheesecloth over the top.

Both pieces were clearly not made in an afternoon -- they show the traces of several different iterations underneath what became the final versions.  I wish I had been documenting all the steps along the way, none of them particularly successful, but I was clearly modeling "If at first you don't succeed...."

Finally I was amused!  The two pieces will be in a show at PYRO Gallery, of work that all the member artists made during the coronavirus lockdown.

The show opens tomorrow and will be up throughout April.  The gallery will be open for visitors every weekend, and we'd love to have you drop in if you're anywhere near Louisville.  I'll meet you there by appointment if you can't make it during regular hours, or if you're still cautious about being out in public spaces.

Posted by Kathleen Loomis at 9:50 PM No comments: