The pandemic quilt is finished!

A year ago I started working on a new project: memorializing the 2,662 coronavirus deaths in Kentucky in 2020.  I went to my stash of polka dot fabrics, the floating circles calling to mind the mysterious virus particles floating around in our air.  I made 2,660 tiny postage stamp quilts, each measuring approximately 1 3/4" by 1 1/4".  I counted them over and over as I bundled and packed them into cigar boxes, putting them away until I got around to stitching the whole thing into a huge grid. 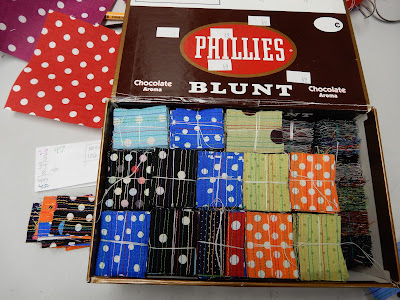 I worked on other projects for the rest of the year, but brought the postage stamps back to be stitched together in November.  That turned out to be bad timing, because I had barely begun the process of sorting, counting and stitching than I realized I had to put them away and work on my annual Christmas ornaments.

After the New Year I hauled the project out again, determined to finish.  To my dismay I realized that somewhere along the way, 70 bits had gone AWOL.  I know I counted them at least ten times along the way, but they were not there when it was time to get serious.  I looked on the floor.  I looked under things on my work table.  I looked on the shelves where the project had been stowed during the holidays.  No bits.  I cussed, I fretted.  Finally I sewed 70 new bits (thus ensuring that someday in the near future I will find the missing ones...) and finished the quilt. 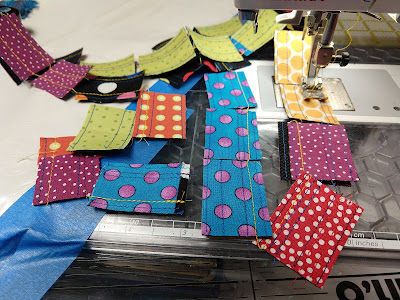 Last night I triumphantly hauled the quilt up from the studio and spread it out on the living room floor to show my husband.  And could hardly  believe how huge the damn thing is!!! 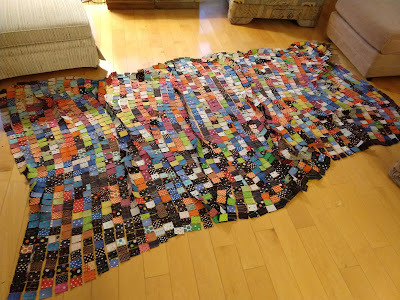 What you see in the picture is not the full expanse -- many of the columns are folded back on top of others.  I realize that the full width, if the columns are pulled flat, will be something like ten feet.  That's a lot of quilt; I may have to buy a new hanging rod, because the brass rods I usually use for postage stamp quilts aren't that wide.

Now the only step remaining is to sew loops across the top of the quilt, so it can be hung from the rod.  And to disassemble the work surface that I constructed for this project, an old vinyl tablecloth spread across my entire sewing machine surround so the bits didn't get caught in any tiny gaps between surfaces.

Then I think I'm done with the sewing machine for a while.  Back to hand stitching.  I have lots of ideas that I need to get going on!

Daily paint -- how it's coming along

In my last post I told you about my new daily art project and why I am feeling quite scared and hesitant.  With ten more days under my belt, I've overcome a bit of the initial paralysis through that time-honored artistic method of stealing from somebody else.

I decided to copy from my four-year-old granddaughter, who brought her paint set along on our Christmas vacation and made two beautiful paintings in her sketchbook.  Since the sketchbook lives at my house, I have it on hand for inspiration.  I was taken by the total fearlessness and joy with which she goes at her art, and thought that if I copied her paintings I might be able to capture some of her mojo.


By this time I felt confident enough to strike out on my own, at least a little bit.  No more copying from the child.  In future if I want to steal another artist's ideas, I think I'll choose a grownup.

Faithful readers know that I have been doing daily art for 20 years, revising my rules every January 1.  After three years of doing calligraphy, I feel overdue for something new, so I decided to leap into the deep end of the pool with something I'm terrified of -- paint.  I'm even having a hard time describing it as "painting" rather than just "paint," much as a long time ago I had to ease into calling myself an "artist," instead first saying "I make art."

This is not a new situation for me.  In 2013 I forced myself to learn to make collage by way of daily art (and did it for three years).  I came to love it, incorporate many aspects and techniques into my "serious art," and would happily do it again as a daily practice.  In 2016 I forced myself to overcome my dread of drawing, even joining a life-drawing group and enrolling in a beginning college art class, where I got an A+.  I learned to make better realistic renditions than I did at the start of the year, but I couldn't force myself to stick with realism.  I quit the drawing group and by the end of the year was filling my sketchbooks with maps, repetitive patterns, doodles and increasingly abstract line work.

So with one success and one failure in my past, I'm trying again.  I've always avoided anything that you could describe as "painting," although I have used plenty of paint in the last decade.  Why the terror, considering that I love to have paintings by other people all around me?  I can think of several possible reasons.

For one, I've always rankled at the concept that painting is "real art," whereas fiber is some kind of second-tier impostor medium that is only grudgingly allowed into museums and galleries.  So if that's the way they feel about it, to hell with painting, I'll do anything but.  A childish opinion, which doesn't even hold up very well under cross-examination, but there it is.

For another, I have never felt comfortable using a brush to lay down color.  In three years of calligraphy I've tried many different writing implements, falling in love with many of them.  But brushes are not in that group.  Every time I try to write with a brush I think the result looks awkward and weak.  So unless I conduct my paint career exclusively with palette knives (not that there's anything wrong with that) I have a big hurdle to overcome.

Most important, I've always relished the freedom that fiber art, especially quilting, offers in terms of  design.  You make a little motif or sewed-together area and put it up on the design wall, and then add some more areas.  And eventually you can rearrange them till you get a pleasing composition.  If you think this red part should be closer to the bottom edge, cut off the extra stuff.  If you think it should be closer to the center, make some more piecing and add it onto the side.  If you think the two red bits should be farther apart, add something else in between.  By contrast, when you paint, you need a sound preliminary idea of where your elements are going to fall on the canvas before you start putting red things down.

I have developed a pretty good sense of composition over the years but I almost always do it on the design wall, moving things around and auditioning and trying this and trying that before deciding on the final result.  I'm afraid that if I can't rearrange I will either end up with crappy compositions or be forced to (gasp! horrors!) make advance sketches.  And advance planning is NOT the way I like to work!  I like to think by doing.  But I have no idea how that's going to work with painting.

I've done one painting so far.  I am using an interesting technique to make myself overcome terror and paralysis, which I'll tell you about soon.