This post has nothing to do with fiber art but I'm feeling seriously crabby. 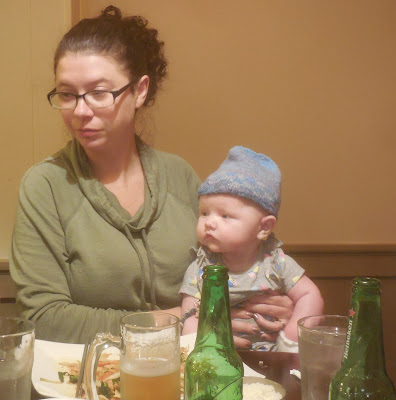 I'm crabby about the crisis in baby formula.  As a mother who failed at breastfeeding my first time around (as did my mother and my sister) and went straight to the bottle the second time around, I can't imagine what mothers are doing today when they can't find formula in the stores.  And it seems that the only response from the public health establishment is to harangue them: DON'T, DON'T, DON'T make homemade formula.

I was particularly annoyed this afternoon to read my regular email newsletter from Dr. Leana Wen, who writes for the Washington Post.  A reader complained to her: "Why aren't pediatricians sharing these recipes?  Public health authorities keep treating mothers like they are too incompetent to follow simple directions to feed their babies."

Dr. Wen sanctimoniously explained the two reasons why mothers shouldn't make their own formula.  "First, commercial formula is carefully researched through clinical trials to provide the specific nutrients babies need.  Homemade recipes will likely lack these nutrients or contain them in improper amounts."

So how about sharing recipes that contain the right nutrients in the right amounts?  Wouldn't that be better than leaving desperate parents to their own devices?

Dr. Wen continues:  "Second, homemade recipes are rife with bacterial contamination.  There are Internet recipes that call for using unpasteurized raw milk, which is really dangerous for babies."

Again, how about sharing a recipe that doesn't call for unpasteurized raw milk?  Or sharing tips for making sure that homemade formula is protected as much as possible from bacteria?  People are capable of canning tomatoes in sterile jars, and in an emergency -- which we have right now -- they should be able to carefully do the best possible job with baby formula.

Dr. Wen and WaPo are not alone in telling people what not to do but offering no help on what they should do instead.  Here's the New York Times' list of don'ts:

"If you're running low on formula, don't dilute it or try to stretch it by adding water."

"Don't buy formula from an online marketplace like Facebook or Craigslist... Always go to a trusted store, pharmacy or directly to the manufacturer."  (in other words, all those places that don't have any formula on the shelves...)

"Don't feed toddler formula to your infant.  (Toddler formula may be OK for an older baby for a few days; check with your doctor.)"

"Buying imported European formulas, which aren't FDA-approved, has potential risks.  For example, in Europe, a hypoallergenic formula may contain intact proteins, which can cause reactions in babies with allergies."  (apparently the White House missed this memo, because they're already starting to airlift formula from Europe...)

For many reasons, this isn't turning out to be a great year for parents and children.  Perhaps the FDA will eventually get around to approving a covid vaccine for little ones, or perhaps they'll just hope the little ones can survive to age 5.  Perhaps the airlifted formula will be sufficient that the babies can survive long enough to be able to finally drink toddler formula.

And with any luck, the little ones will survive to adulthood without being shot up in their classrooms.  Our grandson graduated from elementary school today, uneventfully.  Other grandparents sadly are not as fortunate as we in that respect.

I've been painting fish for several weeks in my daily art project.  Since fish live in water, and since I am intrigued by the washy effects of wet-into-wet painting, I've been doing a lot of experimenting with making the fish blurry, as though seen through the water. 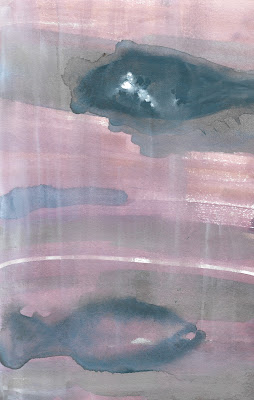 I've enjoyed this series, although I think it's about to end, because I have other ideas to explore.  But a strange thing happened with the fish this week. 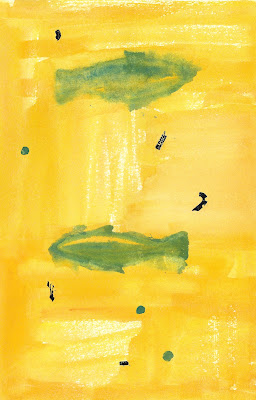 We have been tied up in organizing a family transition, as my sister-in-law is going to move across the country from a single-family home on a multi-acre lot in the exurbs to a senior living center here in Kentucky.  We are her closest family, and it's time for her to come to where we can support and help her.

We visited four, count 'em, four places yesterday, which is at least one too many, if you're planning a similar emdeavor.  But fortunately, we found one that looked pretty good, and this morning we went back for a second look and more gory details.  I think this is going to happen -- as soon as the minor tasks of selling a house and moving across the US can be worked out.  Things will be better for everybody once it's done; just the doing will be hell on wheels.

So back to my fish. 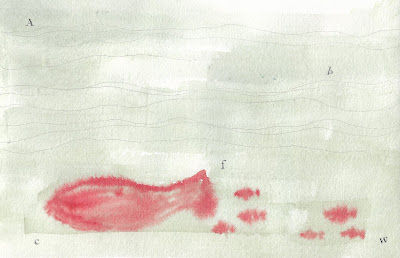 I was going to be the get-it-done, voice of reason on yesterday's expedition.  I was familiar with three of the places we visited, because two dear friends, now dead, had lived there.  I had set foot in these three establishments dozens or scores of times.  I knew that my husband and his sister were emotionally fraught by this task, so I was going to be the one who would guide and evaluate with a slightly more objective and detached view.

But as the day wore on, I found myself un-detached, and unexpectedly feeling trapped and claustrophobic.

The fish told the story -- when I did my painting last night the fish ended up in a box. 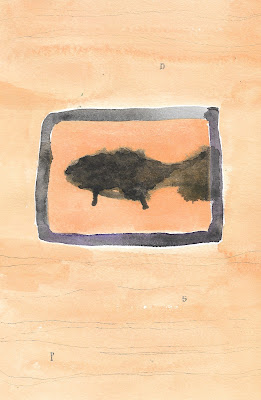 And this morning, before we headed out for the second visit to the best place, the fish ended up in a trap. 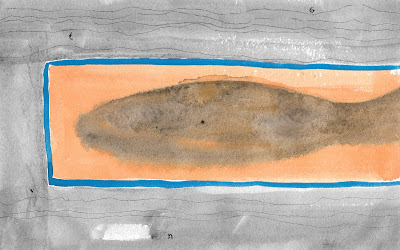 I'm a decade younger than my husband and his sister, so I have known forever that it's likely I'll be the last one standing, the one who does the caregiving and the support at the end of life.  But something about visiting these places made me painfully aware that we're all getting older.

I have sworn that I will never enter an institution when I get old; instead I will die in my own home if it kills me (thus cleverly avoiding the issue of what to do with my studio and my stash and my collections of stuff that I intend to turn into art.  Let my kids deal with that after I'm gone.  And sure enough, just walking into these places -- even the best, most pleasant of them -- reminded me of why I have sworn this oath.

I think the place we have found will be the best solution for my SIL.  It will allow her to easily make friends in a city where she has never lived, thousands of miles away from her present home.  It will give her support and infrastructure so she won't have to lean on us for everything.  It will provide access to dozens of activities and lots of companionship that she could never get in a regular old apartment.  I'm not sure why I'm feeling trapped instead of happy.  (Actually, I guess I'm happy too, but the fish certainly aren't...)