A tale of two cities in three acts

We lived in Germany, where my husband worked as a civilian reporter for Stars & Stripes, the US military newspaper. In the Soviet system, the job description “reporter for military newspaper” was a euphemism for “spy,” so they thought the same applied on the other side. Although ordinary Americans, including GIs, could enter the East at will, we were not allowed to travel anywhere behind the Iron Curtain. No visits to Hungary or Poland, no stroll into East Berlin. Through severe machinations involving the issuance of new passports, we managed to sign up for a half-day guided bus tour to East Berlin.

On the bus we headed for Museum Island, the site of the famous Pergamon Museum, built to house the magnificent relics taken from the ancient Greek city of Pergamon after it was excavated by German archaologists in the 1870s. Ken, who had loved archaeology since boyhood, could hardly wait to get inside and see the goodies. But wait – we couldn’t actually get off the bus. In fact, the only place we were allowed to set foot on the ground was at a cheesy tourist site where we had to spend the money we had had to change into East German marks.

We signed up for a tour to Greece and Turkey, mainly so Ken could visit more archaeology sites, including Ephesus, Troy and – yes – Pergamon! Pergamon, in western Turkey, was a pretty impressive sight, but of course all the good stuff was in Berlin, leaving a lot of ruins for the tourists. 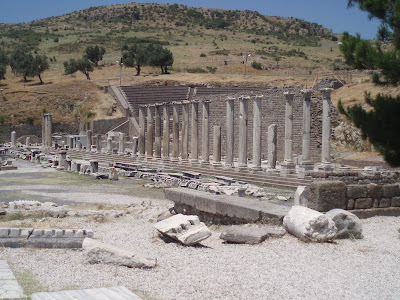 In the day, Pergamon had the second best library in the Greek world, with 200,000 volumes, at least until Mark Antony gave it to Cleo for a wedding present.

In addition to the archaeology, the overwhelming memory of that tour was the temperature – the Mediterranean was in the midst of a two-week heat wave, and it was over 100 degrees as we strolled up the acropolises with only the shade of an occasional column to relieve us. White marble, the construction material of choice for Greek cities, reflects a lot of heat, so you got toasted from the sides and below as well as above. The high point of many an afternoon was getting on the air-conditioned bus, and of course a cold beer at the earliest opportunity.


The first stop on our marathon culture week in Berlin was – what else – the Pergamon Museum! We flashed our three-day museum pass and walked into the huge room built to replicate the Great Altar of Pergamon (2nd century BC). And almost passed out from the heat and humidity. Although in our observation German museums generally provide some minimal climate control, aka air-conditioning, where paintings are involved, there is apparently no such requirement for archaeological finds (and certainly no sensibility for visitor comfort). 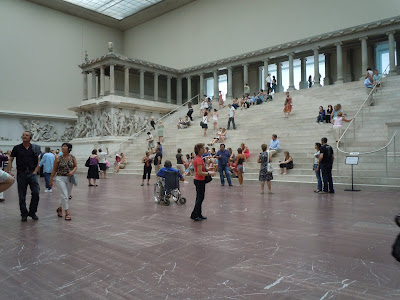 The Great Altar of Pergamon

Europe was again in the midst of a heat wave, and it was nearing 90 that day. Inside the museum it seemed even hotter. It was just like being back in the real Pergamon – hot and full of tourists – except there was a roof and no ocean breezes and you did get to see the Great Altar. And just like in the real Pergamon, the high point of the afternoon was a cold beer at the earliest opportunity (sorry, no air-conditioned bus).

PS – Ken decided maybe those 39 years of pining over the Pergamon Museum had been in vain. We thought the Great Altar was a little underwhelming. What we really liked in the museum was the Ishtar Gate, formerly resident in Babylon. Enough of this archaeology stuff – on to the art museums. 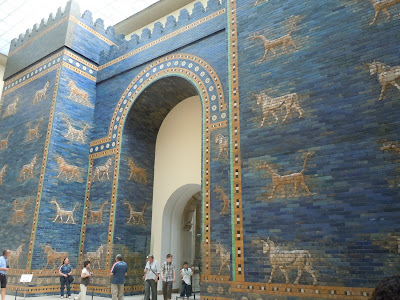 Posted by Kathleen Loomis at 11:50 AM