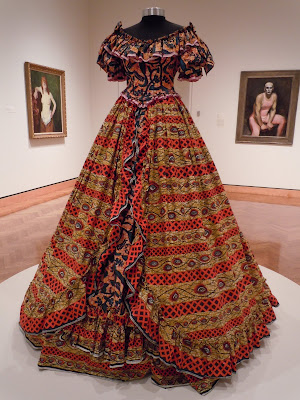 Considering the subtext of the artist's identification with the exploited rather than the exploiters, I have always wondered whether Shonibare does his own sewing or sends it out to some nameless operative. An hour searching on the Internet failed to answer the question.

But it did find a couple of interesting scholarly papers pointing out that the batik fabrics used in Shonibare's work have a complicated history.

Originally, prints like these were made in Indonesia.  In the 1800s Dutch traders attempted to make similar fabric in Europe and sell to the Indonesians (didn't work; the Dutch cloth wasn't as high quality as the originals).  The European fabrics were then sold to Africans, still bearing the Indonesian-inspired designs, where today they are regarded as the next best thing to indigenous.  And Shonibare purchases the fabric for his works at markets in London.

Which reminds me of a beautiful length of batik that I bought in Antwerp several years ago.  In that Belgian city, like many other places in Europe, we saw many people wearing African dress, and happened upon some fabric shops that specialized in batiks.  Unfortunately, all the fabric came in five-meter pieces, apparently the length needed for a standard outfit (flowing dress plus headwrap).  I really wanted ten half- or quarter-meter cuts of different patterns, but had to settle for one big piece, as we were doing the Low Countries by train (and foot) with limited luggage space.  It took me a long time to decide on this one from the dozens and dozens of spectacular patterns. 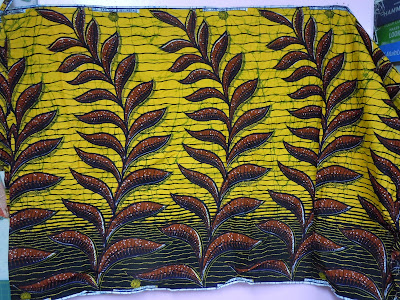 Note how the selvage on the yellow edge of the fabric is in French; on the blue side it's in English.  I think UNTL is the logo of the fabric company. 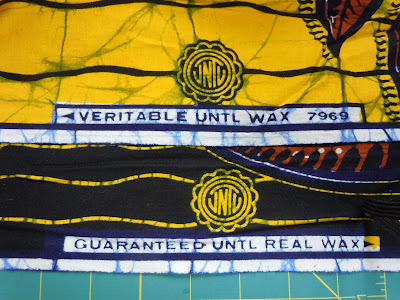 I've used a few small bits of this fabric in quilts but a big hunk remains.  Probably not enough to make a victorian dress with a bustle and ruffles.

Posted by Kathleen Loomis at 6:28 AM