There's only one thing that I obsess over when it comes to the technical construction aspects of quiltmaking, and that's pressing.

If you're going to have a devil-may-care approach to so many other aspects of quilting, it helps to have the quilt lie perfectly flat and smooth.  Otherwise you end up with something that may look glorious from across the room, but from up close looks like you sewed it in a closet on a toy machine with the lights out and work gloves on.  That's a look I want none of.

Here's a before-and-after example from a workshop I taught. 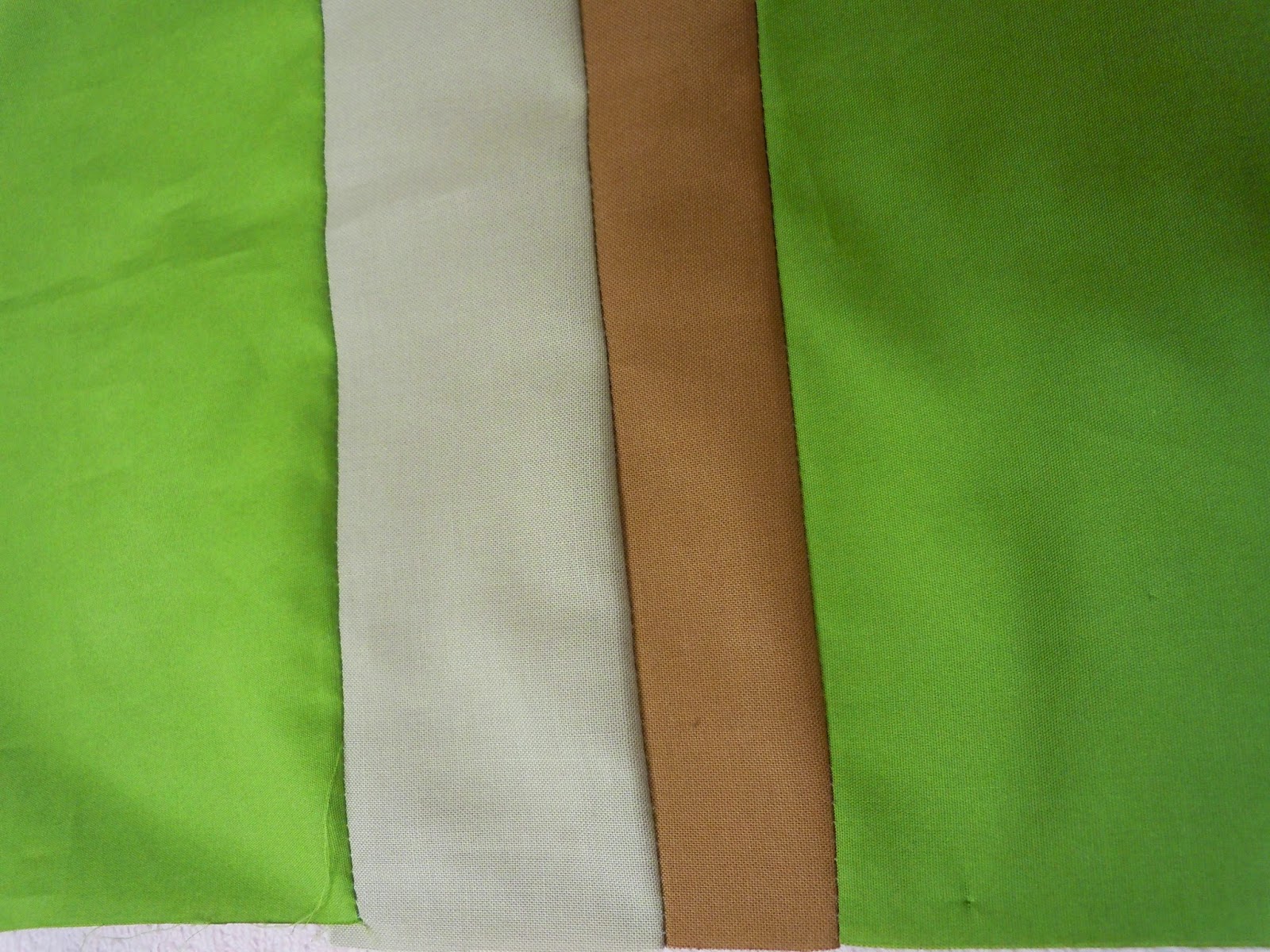 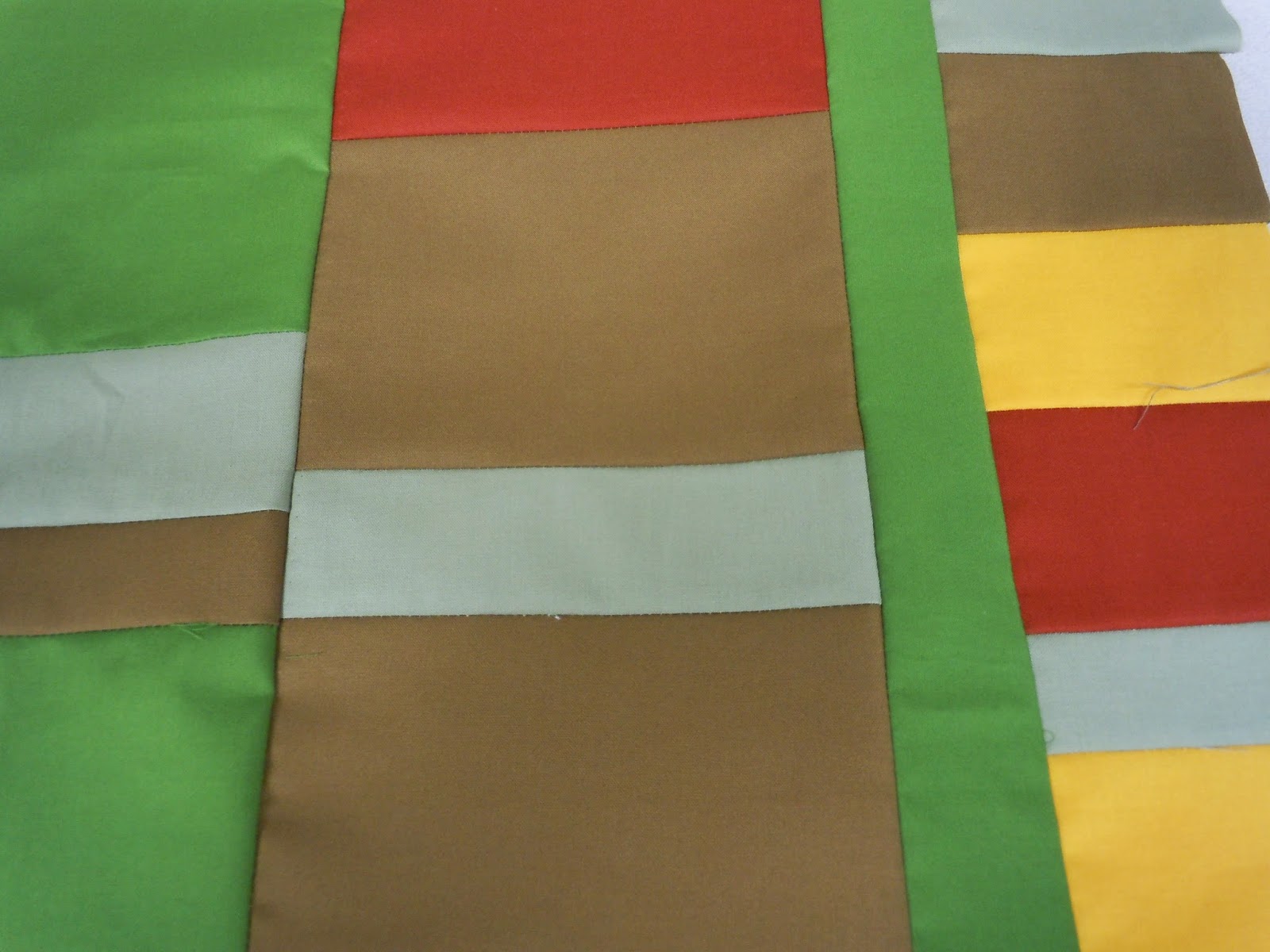 Before: the student pressed her strips the way she usually did. 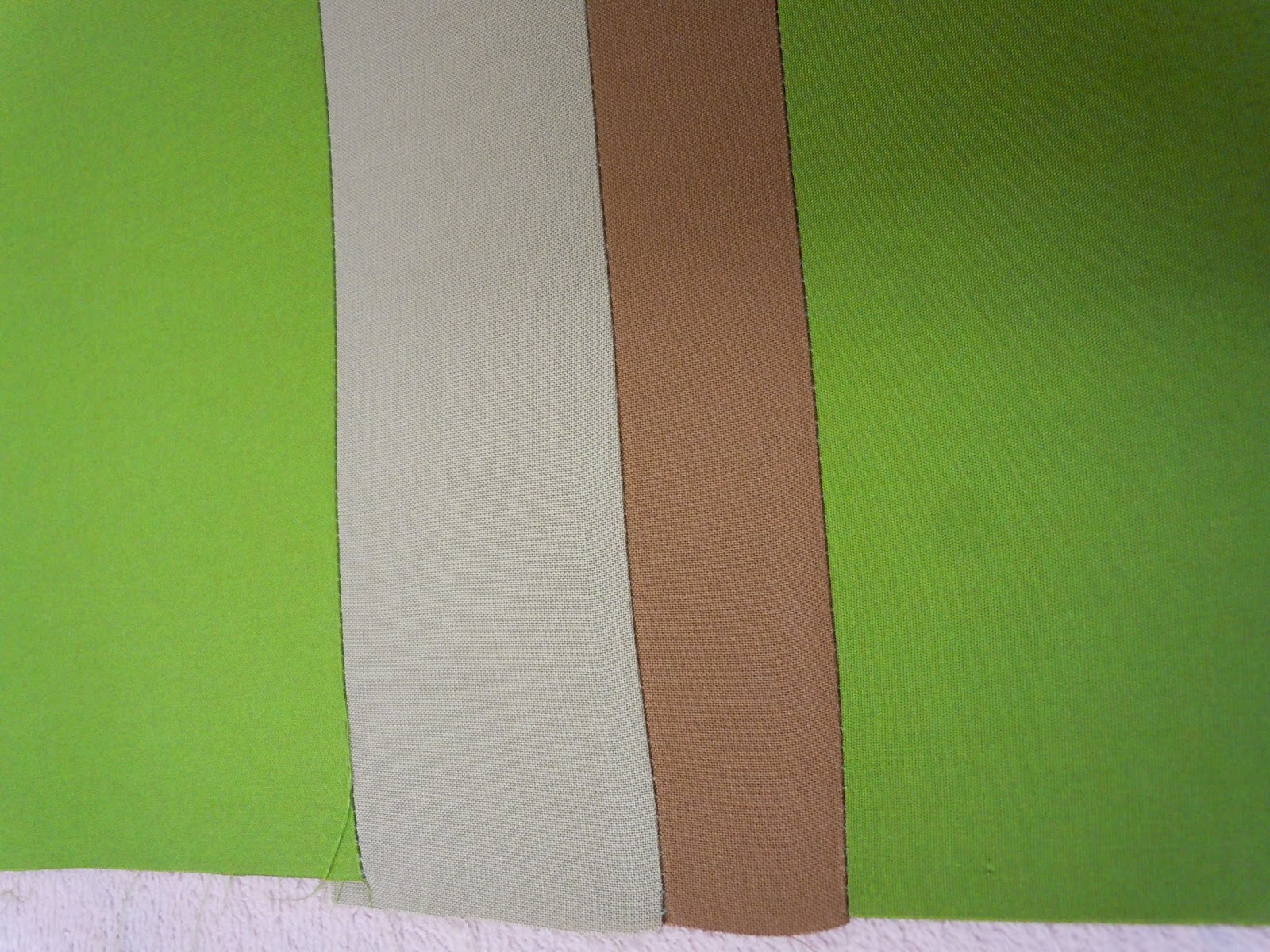 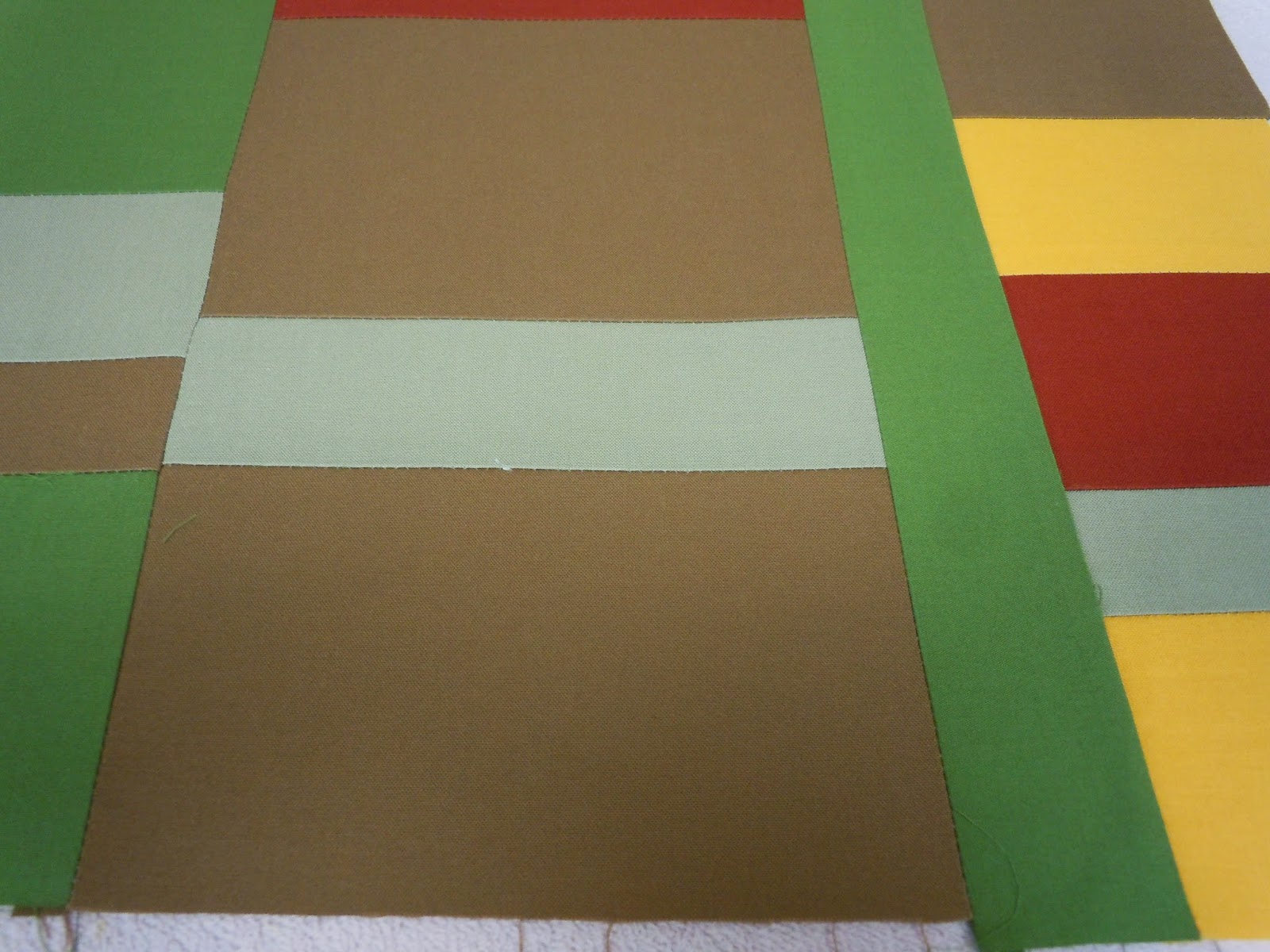 After:  the strips have been pressed obsessively.  Which one looks better?  And a well-pressed seam makes it much easier to sew all the subsequent seams that will cross it.

Here's you can become a master of the iron.

First, make a pressing surface on a table or counter rather than using an ironing board.  A large ironing surface means the entire expanse of the piecing can be pressed flat, not just a segment of it.  Ideally your ironing surface would be as big as the finished quilt, but in interim stages of construction that's not necessary.

I set up a small ironing station next to my sewing machine so I can press blocks in process without getting up.  Two or four thicknesses of a towel make a fine surface.

Ironing boards are made long and skinny precisely because you can get small areas of a three-dimensional garment to lie flat long enough to be pressed.  But when the garment leaves the ironing board, it reverts to its original rounded shape, suitable to fit your bust or your butt.  Similarly, a quilt can lie perfectly flat on the narrow board -- or at least a small portion of it lies flat -- but actually be wavy and bulgy when you try to smooth the whole thing out on a wide surface.

Before we get to specifics, a general rule: quilt seams should be pressed toward one side or the other, not pressed open as in garment construction.  The problem with open seams is that if they're subjected to any pulling, they will separate, leaving ugly gaps between the threads and allowing the batting to show and perhaps escape.  By contrast, if the seam is pressed to one side and pulls open, you'll just see the bottom seam allowance, not the batting.

A second reason to avoid pressing seams open is to make your quilting easier.  Many times you want to stitch in the ditch -- that is, put your sewing line as close as possible to the seam, on the downhill side.  But if the seam is pressed open, there's no downhill side; both sides are at the same height.  It's harder to place your stitches, and if you accidentally sew into the center of the seam, you aren't really holding the fabric to the bottom layers, you're just catching the threads.  That makes your quilt much less sturdy and secure.  So unless you have a really good reason not to, press both allowances to one side.

The rule of thumb is to press every seam before you cross it with another.  Depending on your design, you may have to do that immediately, but in some quilt blocks, such as Rail Fence, with several parallel seams, you can sew the entire block together before you need to press.

Unless I have really light-colored fabric sewed to really dark, where show-through on the front side of the quilt would be a problem, I prefer to press all parallel seams in the same direction rather than point them individually toward the darker side.  It makes pressing easier, and can also make sewing easier as you start joining blocks into larger expanses.

If you have some places where a very light rail is next to a very dark one, and you must press toward the light, check to  make sure there is no see-through on the front.  You can trim off a millimeter of the dark fabric if necessary so it doesn't peek out from behind the light seam allowance. 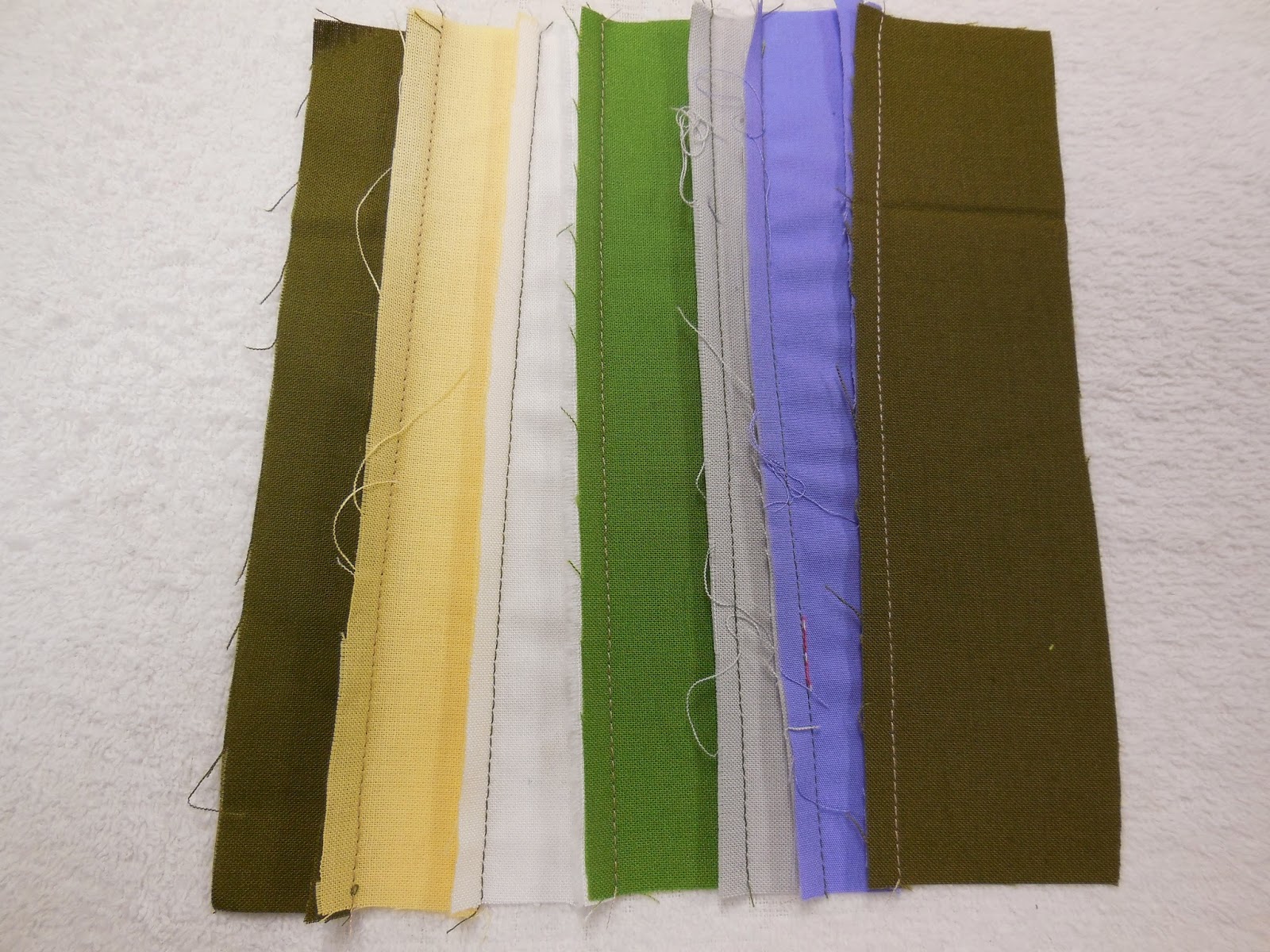 Place your block face down so the seam allowances are visible.  Swipe your iron gently over the seams, just enough to make them all point in the same direction.  At least half of the iron's weight is still supported by your hand, not weighing down on the fabric.  You don't want to put an actual press into the fabric yet; wait till you get it right side up and can see what you're doing.

Flip the block so the right side is up and the seams (or seam) are vertical.  If you're righthanded, point the seam allowances toward the left.  Feel the seams to be sure the allowances are still pointing as they should.  You will  note that at each seam, there's a "downhill side" close to the iron, with only one thickness of fabric, and an "uphill" on the far side with three thicknesses.  The panel steps up a bit at each seam, kind of like a staircase. 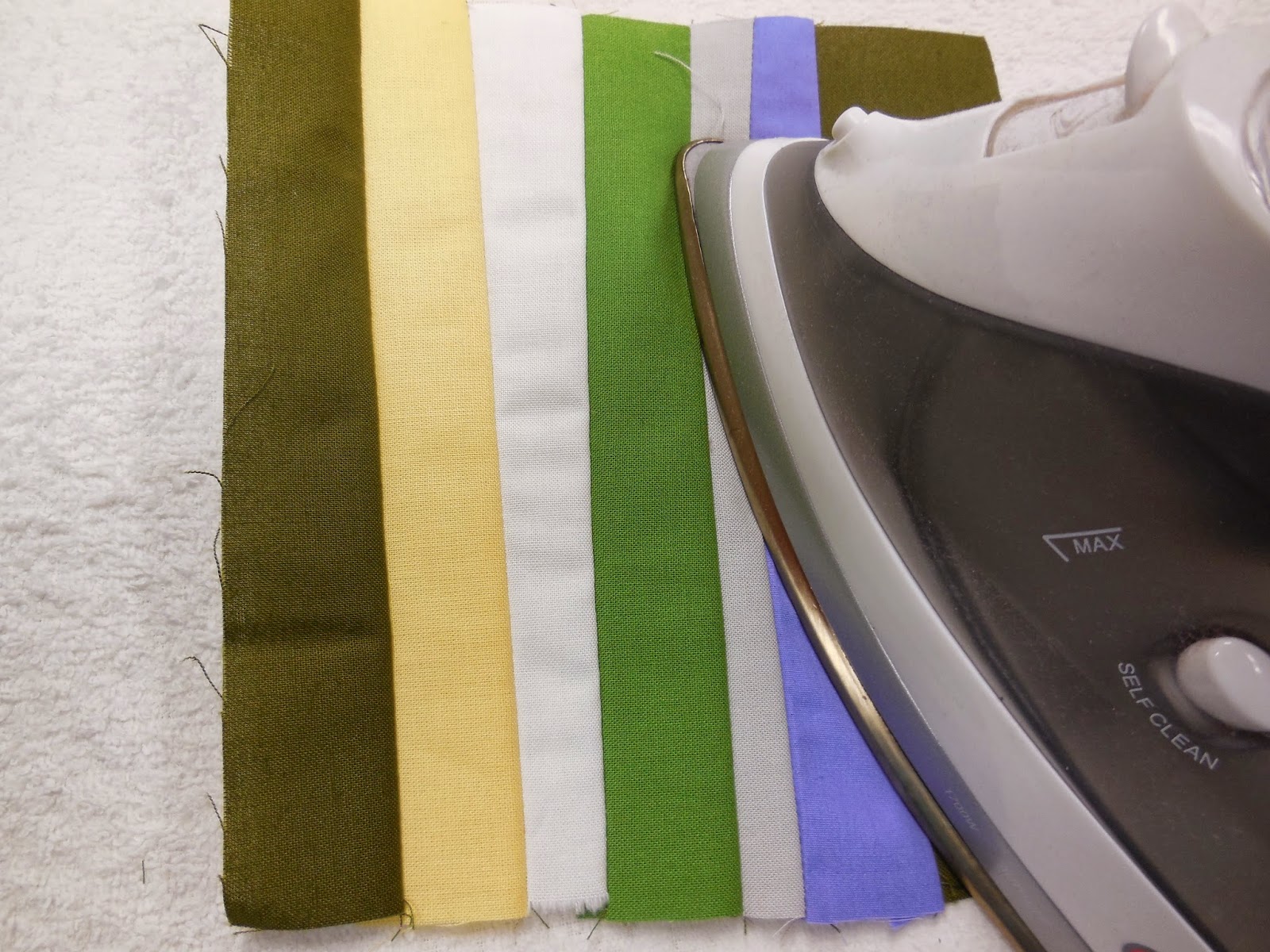 Place your iron on the right-hand strip, NOT touching the seam yet.  Move the iron to the left across the seam, using the side of the iron as a bulldozer to push the fabric away from the iron as you move onto the second strip.  You will notice a bubble of fabric moving ahead of the iron -- that's the extra fabric released as the iron opens the seam farther.

After you've nudged the bubble out the far side and everything seems flat, go back and press the entire panel leisurely.  Let the full weight of the iron rest on the seams as you move it slowly across the fabric.  Inspect each seam: if it isn't entirely open, give it a spritz of water from a spray bottle to relax it and press again. 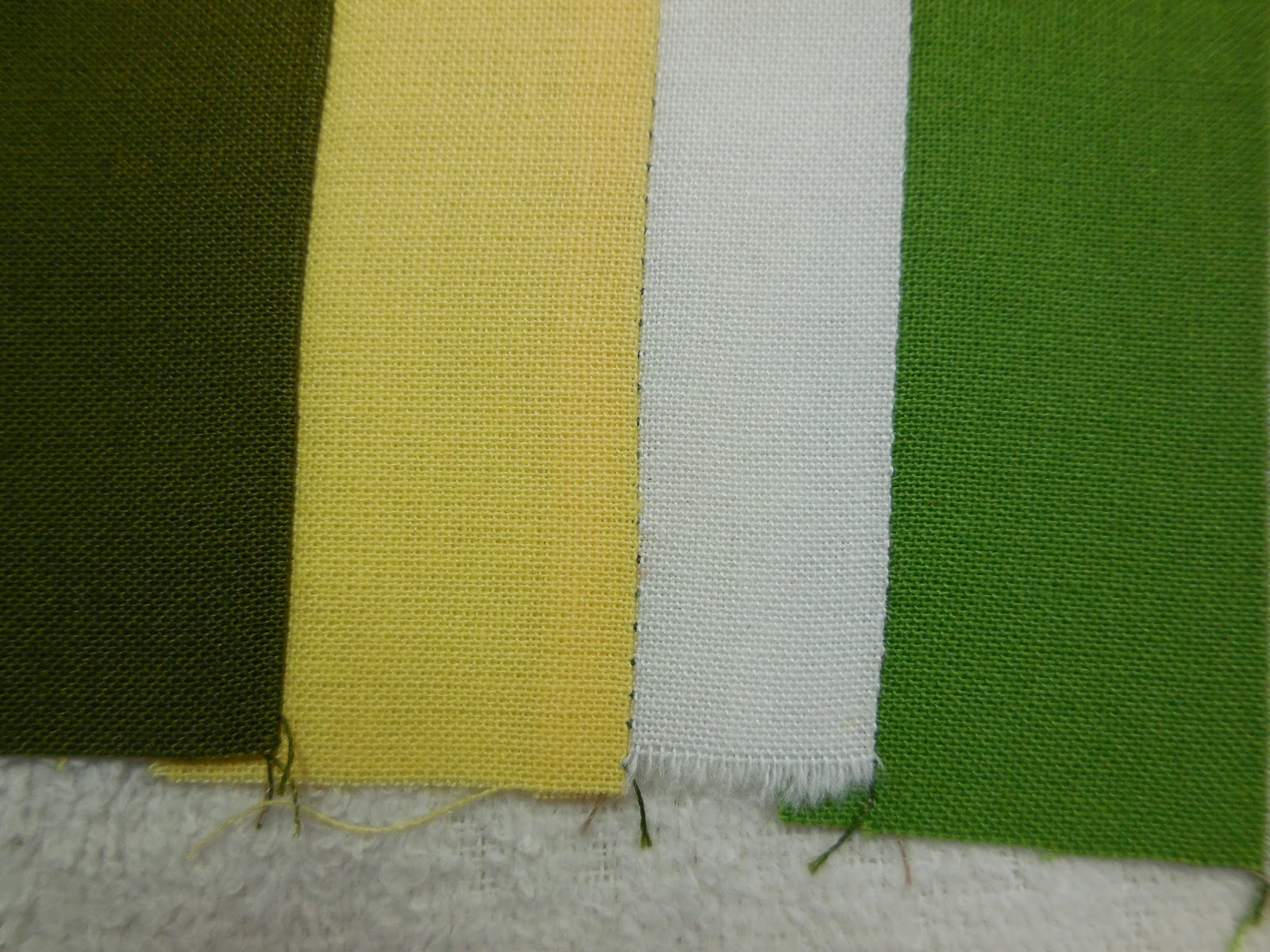 If a seam has opened too far, so that you see dots of thread, spritz it and press again, a little less enthusiastically this time to close the seam a hair. 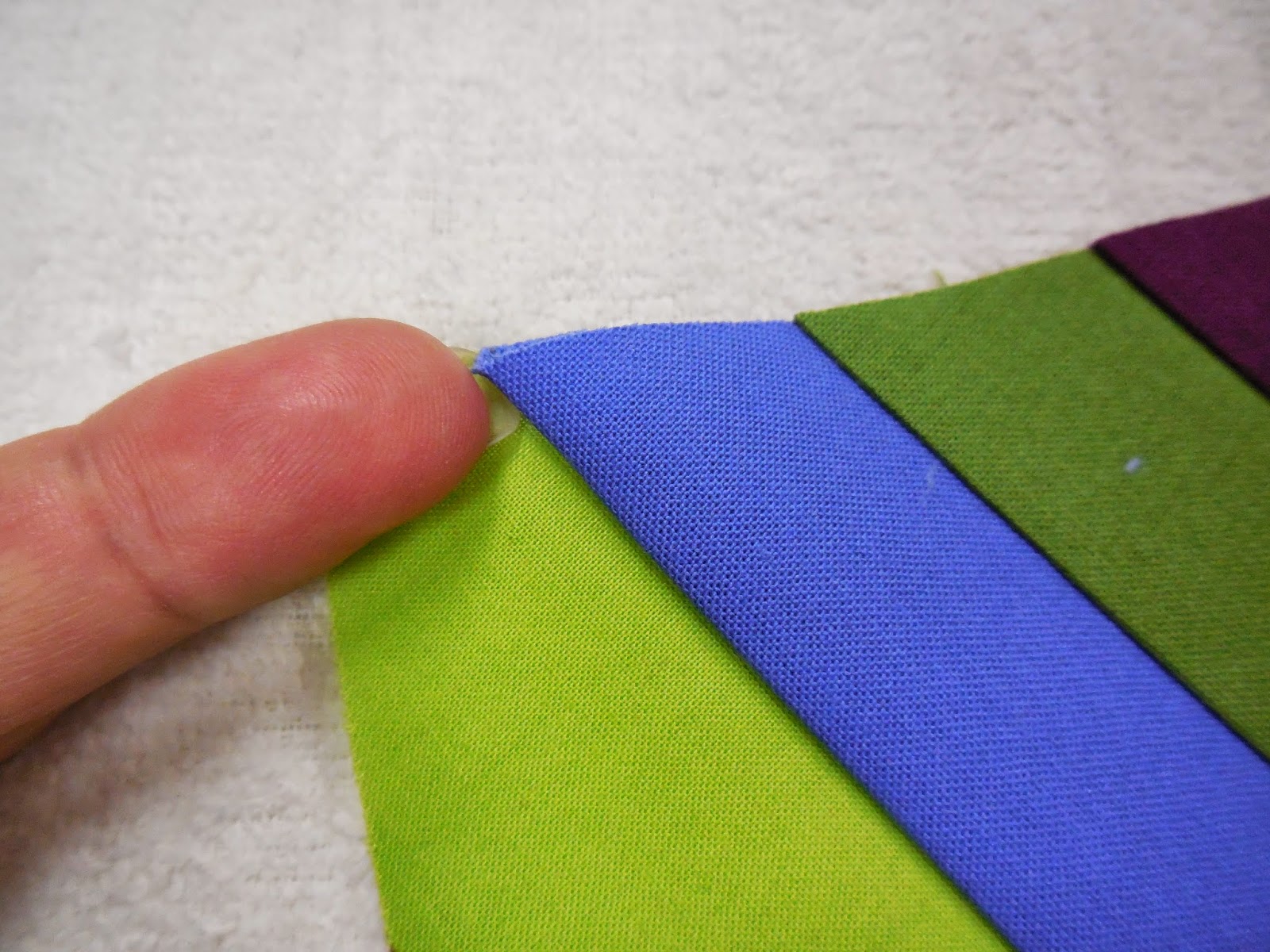 If a seam hasn't opened far enough, so that there's a pleat on the front side, spritz it and press it farther open. 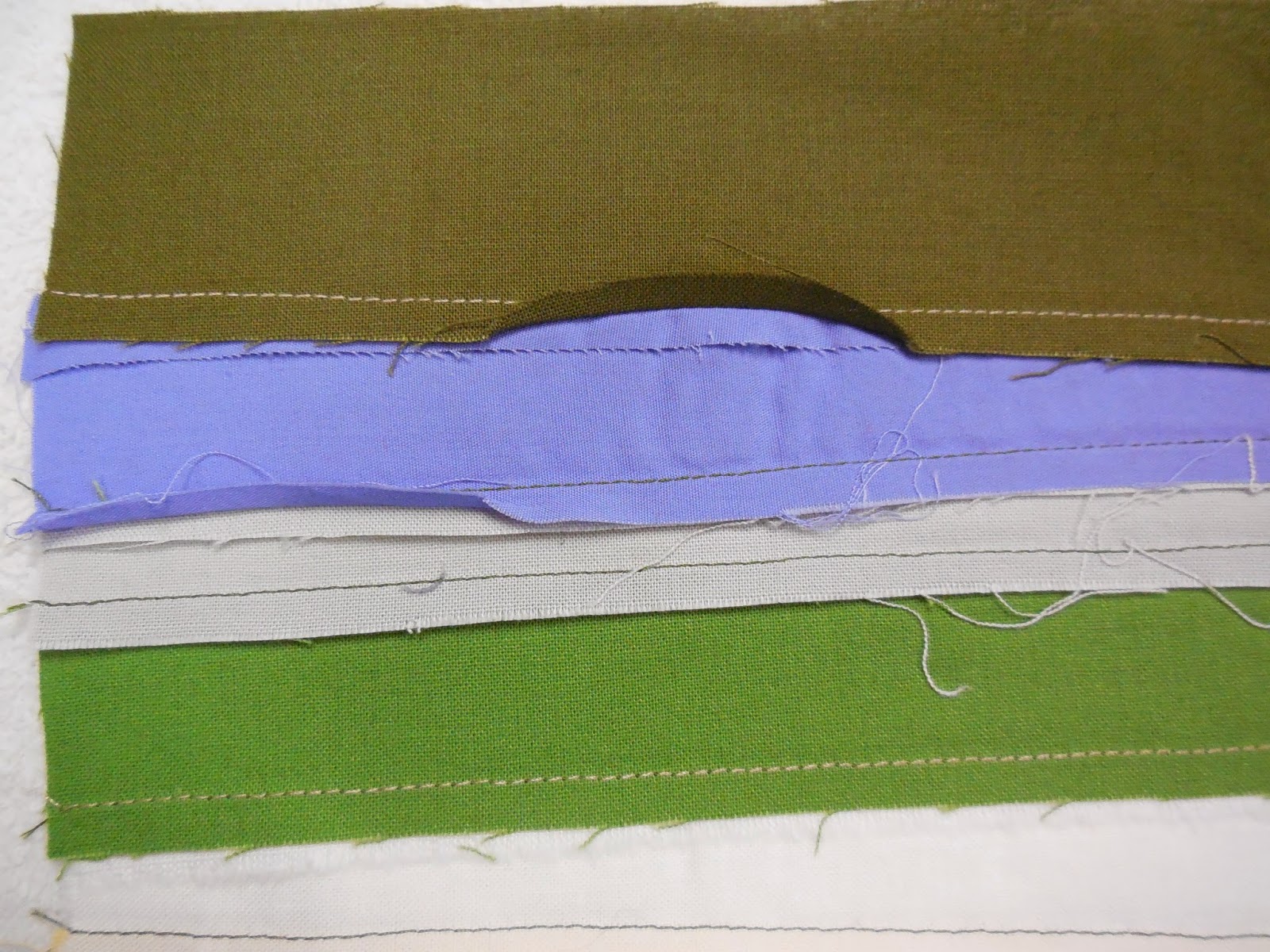 Finally, turn the block over and check the back side to be sure no seams have flipped in the wrong direction.  If they have, spritz and correct the mistake.

Issue 2: pressing the seams between blocks

You've sewed two blocks together and need to press the seam, but in which direction?  Unfortunately there's no simple rule.  Instead, here are some considerations.  Think about all of them and try to find the best answer.  Sometimes one consideration argues for pressing toward the left, and another argues for pressing toward the right.  You decide which one trumps the other.

-- Press toward the darker fabric to avoid show-through on the front side of the quilt.

-- Press toward the side with the fewest intersecting seams, to minimize the number of fat bumps where the seam allowances fold back and pile up on top of themselves.

-- Anticipate how this seam will relate to the corresponding seam on neighboring blocks.  If the seams are to align at the corners, it helps to have them pointing in opposite directions.  That is, where four blocks come together, one of the seams will point northward and the other will point southward.  This way the bulk of the seam allowances doesn't pile up and make a huge bump at the corner.

In some cases it's hard to decide, but don't obsess over it.  Even if seam allowances pile up on each other, on a problem scale of one to ten this isn't even a two.  Press it one way or the other, and move on.  Just check carefully on the front of the quilt, and if the seam is too bulky, give it an extra spritz and press twice.

Toward the end of the construction process, you will be sewing long seams, with multiple blocks on each side.  The decision of which way to press the seam is like that in Issue 2, except there are so many more places where the considerations contradict one another.

The simplest solution is just to press all the seams in the same direction.  Sure, some intersections will be a bit bulkier than others, but don't worry about it.