After the interruption of telling you about the SAQA show at the Indianapolis Museum of Art, I'm resuming my longer reports on the SDA show at the Schweinfurth Memorial Art Center in Auburn NY, a show that I found much more interesting because of the wider variety of subjects and techniques.  Today I'll talk about machine stitching used as the main method of creating pattern and design. 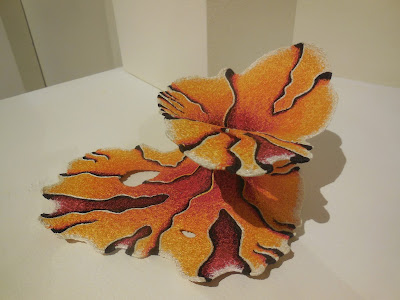 Well, I'll admit it, maybe I'm biased toward this work because it's so similar to work that I have been experimenting with myself.  The artist has heavily machine stitched, to the point that the underlying canvas support is no longer visible.

She points out in her artist statement that she likes the distortion of the flat canvas and the fact that the stitching allows the form to be self-supporting, and I would make both these points in regard to my own stitched sculptures.  I like the biomorphic form in this piece and wonder what she has made in subsequent work in this series. 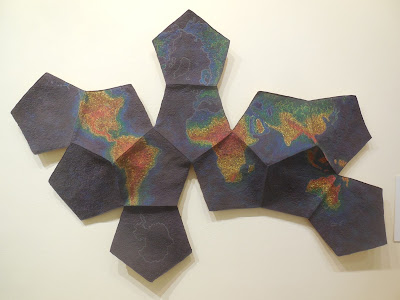 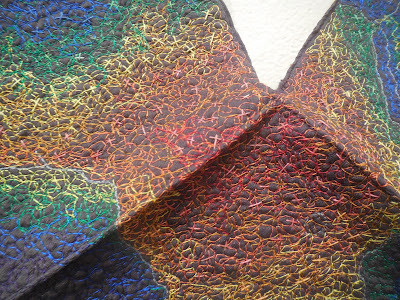 Here's another piece that gives me deja vu to my own work: an unfolded geometric solid that makes an interesting projection of a world map.  Although the different colors of the stitching represent different data variables, we're not told what they mean.  (Why do you suppose Europe has no warm colors whatsoever?  And poor UK doesn't even have any green or blue -- maybe it's because of Brexit.)

I like the way the work spreads out on the wall and yet retains a 3-D character; I like how Antarctica is perfectly centered in its own pentagon. 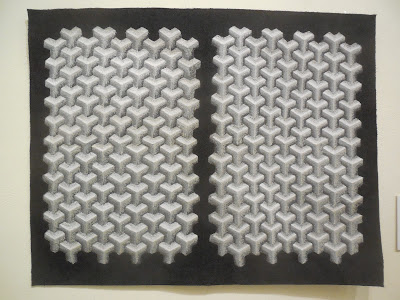 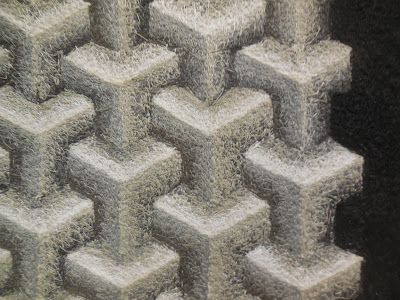 This large hanging is made entirely of machine stitching, and in a masterpiece of overachievement, it uses black, white and 11 values of gray thread to give subtle shading on the ziggurats.  The shading isn't totally realistic -- you don't see deep shadow on both sides of a cube -- so it gives a rounded effect, as if the stones have worn away under centuries of footsteps.  This took a LOT of stitching and a LOT of control.

Tomorrow I'll show you hand stitching.  The SDA show continues at the Schweinfurth through August 21.