As usual, I made Christmas ornaments this year -- except that I probably should just call them "ornaments" because I decided that I needed to give some to a few Jewish friends.  Since there are no religious symbols on them, I hope they can be appreciated as Hanukkah gifts, or just plain end-of-year gifts.

As I mentioned in an earlier post, the main tool this year was the heat gun.  I had discovered many years ago in a workshop with Jeanne Beck that a heat gun does interesting things to synthetic fabrics, and I had also noted that when you heat up nylon cord, it will melt together and resemble blobs of glass.  So that was the concept.  But there were plenty of learning experiences along the way.

I needed the ornaments to include the recipients' initials and the year, which obviously couldn't be done with a heat gun, so I wrote the data onto small strips of ultrasuede.  I discovered that a Sharpie works a whole lot better than a Micron pen for writing on ultrasuede; the Sharpie dries instantly, while the Micron takes forever, risking smudges if you handle it carelessly even days later.

The main part of the ornament was going to be a roll of fabric to give body, then wrapped with nylon cord and beads and melted all together.  I didn't want fraying edges, so I pinned the bit of fabric into shape (the bottom edge was a selvage, so it was OK as is) and stitched the ultrasuede and the hanging cord firmly in place. 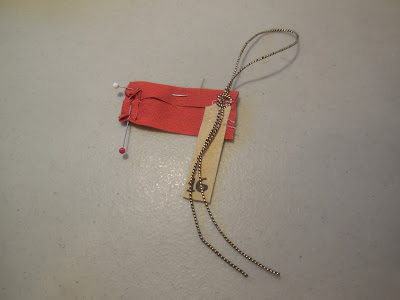 Then I rolled the fabric up and pinned it in place.

One of  my early learnings was that ultrasuede, being a synthetic material, will scorch and melt when hit with the heat.  And the cotton fabric, while fairly heat-resistant, will scorch with too much heat.  So I wrapped up the vulnerable parts in denim to protect them, and put the package into my holder.  (Wood also scorches with heat, as you can see.) 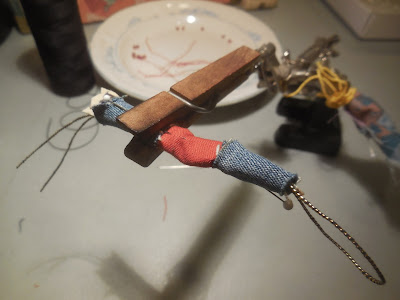 My  first plan was to wrap this bundle in the nylon cord, probably with some beads strung on, and then melt everything into a nice glasslike blob.  But I quickly learned that the cord wants to melt and separate long before there's enough heat to fuse the whole construction together.  So I had to string the beads on heavy cotton thread and wrap the bundle securely, then wrap the nylon on as a separate step.  Even though the cord might come apart, the beads will stay where they belong.

After I got the nylon cord melted, I loosely wrapped the bundles again with a metallic thread, which frizzled up beautifully with the heat to make little halos around the bundles. 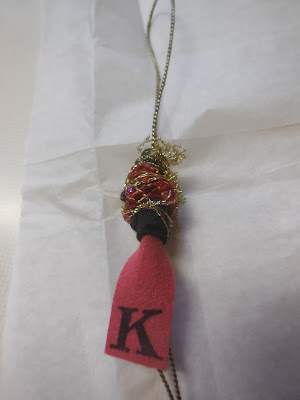 I like these ornaments; they're way different than anything I've done before, and that's a challenge after you've been at it for decades.  Early recipients have told me they look mysterious and rich -- exactly the effect I was hoping for.

I hope you all had a good Christmas, or Hanukkah, or Kwanzaa, or whatever festivity you might care to celebrate at this year end.  It hasn't been the best of years, but let's find all the joy we can where we can.