Kid at the sewing machine!


Isaac accompanied his mom to the fabric store last week and saw some fabric with deer.  He wanted to buy it and make a pillow to give to his father, who loves to hunt.  So he came over yesterday to sew.

Although Isaac has been using the sewing machine for four years now, it has always been collage/applique.  All he had to do was pivot the fabric to point in the direction he wanted to sew, and pedal-to-the-metal.  We never cared whether the stitching went right down the middle, or if it caught the entire piece being attached, as long as the seam didn't run off the edge of the base fabric.  He had never attempted to sew a straight seam, nor keep the raw edges to the inside.  So this project was going to be a challenge.

Fortunately, he rose to the occasion.  After all, he's nine years old now!  I cut out the squares of fabric in advance, then put a piece of blue painter's tape on the sewing machine table so he could maintain a half-inch seam allowance.  I marked the corners with a pencil dot so he knew when to stop sewing and pivot.  But he did all the rest. 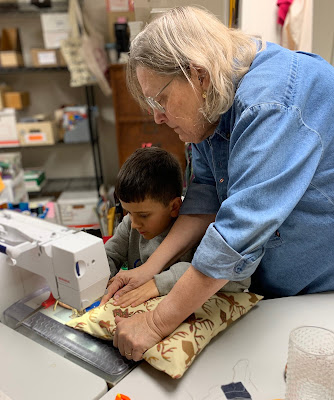 The hardest part came at the end, after we turned the pillow cover inside out, stuffed it and pinned the last side closed.  It took help to hold the foam rubber away from the pillow edge so the gap could be neatly stitched shut.  But we managed that part too.  Here's Isaac with his finished present: 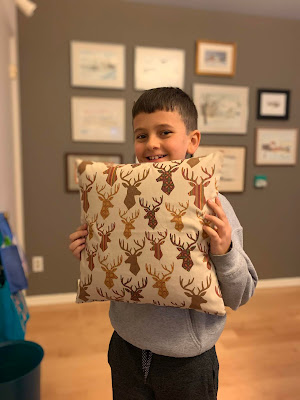 Posted by Kathleen Loomis at 8:00 PM