How not to embroider your socks


I've complained in earlier posts about the way non-sewists in the news media often write or talk about sewing and fabric in the most laughably ignorant way.  I saw it when non-sewists were trying to show us how to sew masks -- I even wrote the New York Times about their mask pattern, in which a 3/4-inch wide strip of fabric was supposed to be folded three times to make a tie -- heck, might as well use a piece of string, because that's what you would come up with if you were even able to sew the damn thing together.  The corrections desk thanked me for my letter but printed the directions again without change.

This ignorance is not new with the pandemic, but I'm seeing more of it lately as people turn to craft projects to while away the quarantined hours.  The Times has been running a weekly feature called Designer D.I.Y. in which famous fashion types tell us how to do something questionably useful.  Last week's feature, for instance, was how to cut a slit halfway up into the middle of a blanket to make a coat/cape/ruana -- very timely as we head into a globally-warmed summer.

Today's feature is how to fancy up your socks, courtesy of Simone Rocha, a young Irish designer whose work has been described as "often toeing the line between pretty and perverse."  And here's how to personalize those toes, illustrated with yummy watercolored sketches instead of boring old photos. 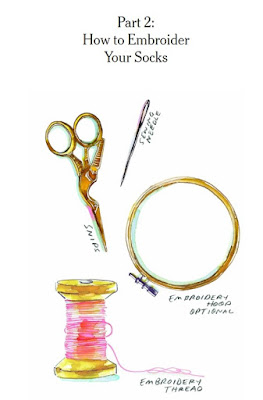 First, you get your stuff together.  I wonder what kind of "embroidery thread" comes on a spool?  Are people supposed to use plain old sewing thread? 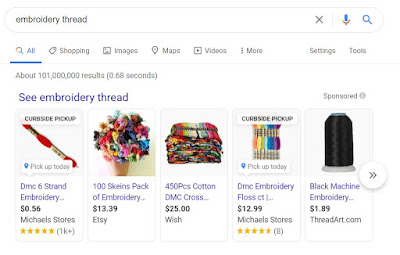 Maybe they will google "embroidery thread" and zip past those first four offerings of embroidery floss, heading for the machine embroidery thread at right because it's the only one that remotely looks like the picture in the newspaper.  That will make great sock decoration, folks.  (By the way, you, as a knowledgeable sewist, might be tempted by the third offering on this screen, 450 skeins of DMC floss for $25, from wish.com.)

Now that you have your thread, start sewing!!  After you write your name on the sock as a stitching guide, you may find it easier to put it in an embroidery hoop, as in the helpful drawing. 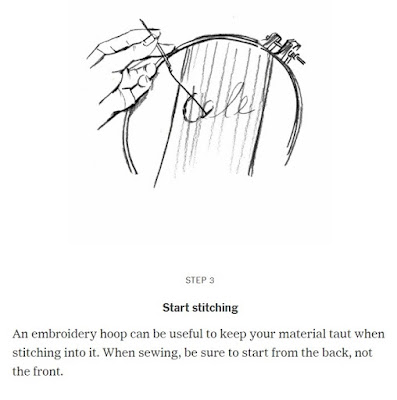 Hmmm.  That's all the directions say.  I wonder how many people will proudly taken their embroidered sock out of the hoop and discover they have sewed the back to the front.

Posted by Kathleen Loomis at 11:27 AM